When Kasedo Games invited us to their offices to show us Project Highrise, I’ll admit I was a little underwhelmed by what I had seen. Steve, our Editor-in-Chief, likened the gameplay footage to the mobile game Tiny Tower -- build floors, get earnings. What greeted us was, in fact, more like SimCity than anything resembling Tiny Tower.

Project Highrise is a game where you have to craft a working environment in a city, in the form of a big building. Sounds super dull, right? Well, whilst Kasedo’s Patrick showed off the latest build fresh from SomaSim Games (developers of the Age of Empires-esque 1849), it didn’t take long at all to become absolutely swamped by depth. We were shown both modes, the main sandbox mode, and the scenarios mode.

In the normal mode, you start with a plot of land and a building, as well as some money. You have to choose what is going to go where -- will it be offices, retail, restaurants? -- and who you want to rent that space out to. Each tenant has wants and needs, from just requiring electricity, up to needing a certain amount of cafés. Some require services such as fax/copying facilities, which cost you to open and maintain but don’t bring in any rent. 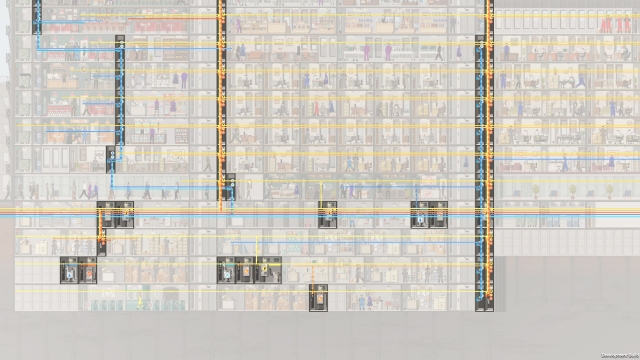 Once you have your offices, or shopping mall, or whatever you wish to build -- heck even before any of that -- you can take contracts which earn you some extra cash. You can have two at a time, and these might be something small like reaching this population, or challenge you to have that amount of rent.

The scenario mode gives you limitations and specific goals, like having to have a certain amount of floor space by a deadline. I was told that they are looking into implementing Steam Workshop support, and the scenarios would be perfect for that. There aren’t any plans in place for leaderboards, competitive play or co-op, so it would be an ideal way to show off any buildings you’re particularly proud of. 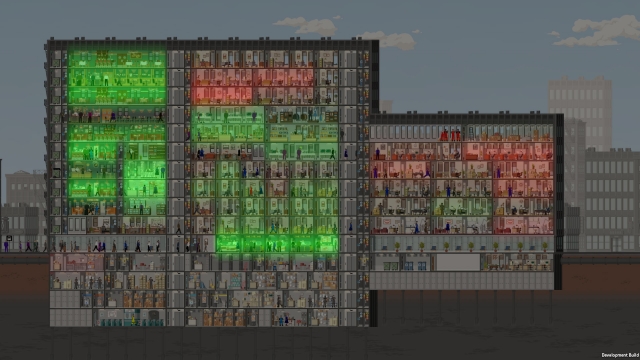 You can have an overlay showing you smell, noise and traffic - and more!

Just in case you think that you’re going to be cramming everything into a small space, you can actually expand both up and down. In the build we saw, you can construct 39 floors. However, in the previous build, we were told that the limit was only 20! I’ve asked SomaSim how high they want to get to for release, but that will be covered in our interview when it gets published.

I mentioned before that Project Highrise has a SimCity feel to it. You have to run water and gas pipes, as well as your wiring to each relevant property, and make sure there is room between offices to put the supply closets, one on each floor. Another thing to consider is foot traffic, as the more people who pass through an area, the sooner it will need renovation. If your busiest restaurant is on the other side of the building from the elevators, then the offices between the bus stop at the edge of the property and that restaurant will need regular maintenance from your team. 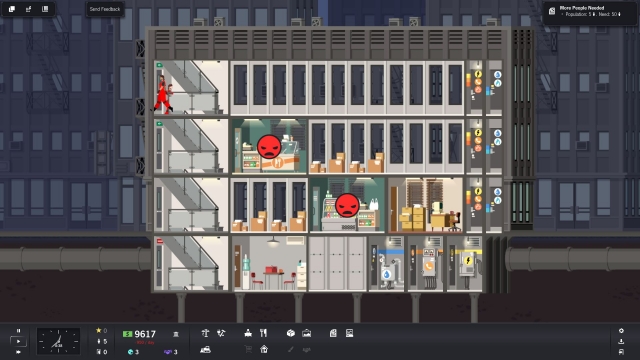 Of course, if you build all of the popular stuff near the front and then construct a metro stop beneath your building, that will throw things off. Oh, yeah, you can construct floors below your property, too! You have to consider where you build things, so smelly places might be best near the bottom, as otherwise you run the risk of the noise and smell of certain services making tenants leave -- and if they leave others might follow. 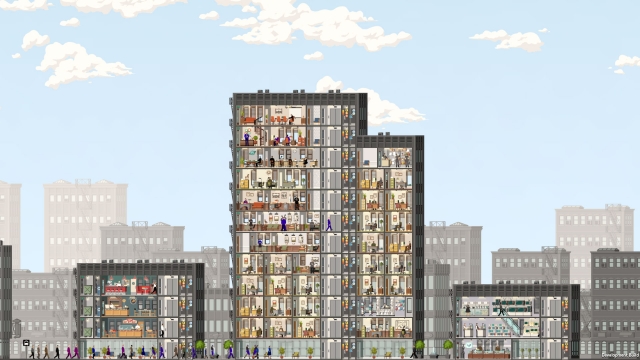 You can have multiple buildings, too!

Apparently the only way to lose the game is to run out of money, run out of loans and run out of things to sell. Of course, we asked SomaSim for firmer details on the ‘win/lose’ conditions of the sandbox mode, but again it’s very much a SimCity kind of thing. Will you thrive or fail miserably?

It’s due out on Steam in the next couple of months. We’ll have a review for you around then!

It's Skyway or the Highway for Project Highrise

it's like simtower, or yoot tower..  why compare it to simcity and tiny tower?

Unfortunately I never actually played SimTower, so I was completely unable to spot any similarities. However, I have played a few SimCity's.

oh and 1849 is nothing like age of empires... you need to step up your comparative game, bro.