Skating games are enjoying something of a resurgence lately, with Tony Hawk’s Pro Skater 1+2, the announcement of Skate 4 and indie projects like Skater XL making us fall in love with the pursuit of skateboarding once more. I, for one, can feel a worrying delusion working its way into my mind with all of these videogames serving as inspiration. I’m growing emboldened by the idea that it’s a good idea to go careening down a hill on a plank of wood attached to some polyurethane wheels.

Perhaps I need to be taken down a peg or two and reminded of the absurdity and dangerousness—for an uncoordinated schmuck like me—of skating. And so I turn to SkateBIRD, the upcoming arcade skating sandbox from Glass Bottom Games. I find myself curious to see what it brings to the skateboarding genre and so I’ve downloaded the limited-time demo available in the Steam Game Festival: February 2021 Edition. 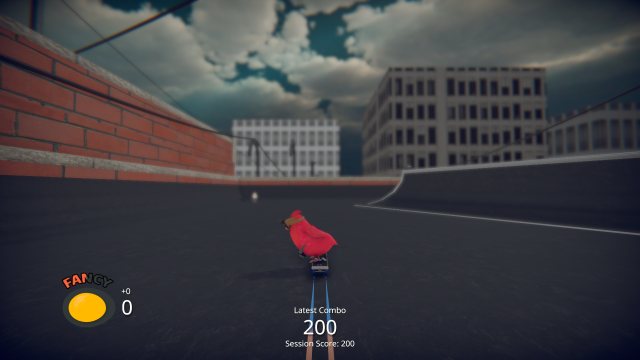 The demo thrusts me into the game’s second level, a collection of highrise rooftops connected by power lines. Of course, that’s not the first thing I notice: that honour goes to my skateboard-riding avatar, a multicoloured little bird with 3D glasses and a cowboy hat. The demo randomises my bird’s appearance upon subsequent launches, but it’s this cowboy hat-wearing skatebirder who stays in my heart.

If this title’s ludicrous outfits hasn’t already clued you in, SkateBIRD has its tongue buried well within its cheek. The game’s sandbox environments are populated by fellow animals who engage in brief, quip-filled exchanges with my little skate-birdie before sending them off on some skate-related task. Spine transfer from one roof to another; collect eight bags of tools and a blowtorch; launch through the air using a ventilation exhaust—you get the idea. The mission structure reminds me of the story-based Tony Hawk’s titles, and so does the trick system, albeit with a healthy dose of Goat Simulator’s floaty physics stuffed in there for good measure. 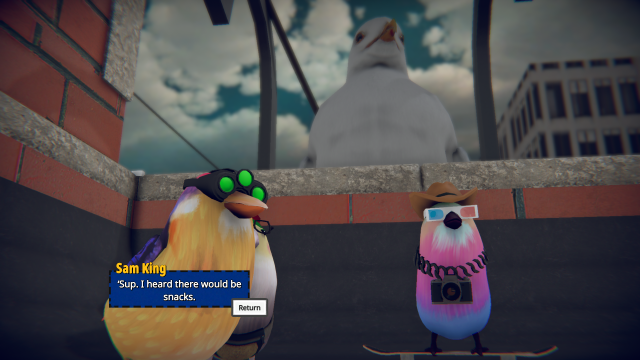 In terms of bailing, a core feature of any skateboarding game, SkateBIRD is noticeably more forgiving than Tony Hawk’s titles—and certainly more forgiving than any Skate title. Landing at an odd angle rarely sees me bailing, and a number of optional settings decrease the difficulty further by slowing down gameplay, triggering automatic grinds or triggering automatic tricks. It feels like innocent fun. Most likely not something I’d take overly seriously or commit hours of my life to, but fun nevertheless. 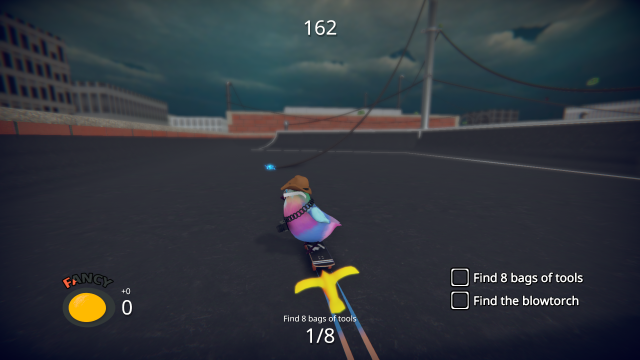 I do wonder, however, why this second level—the rooftop one—was chosen for the demo. From the game’s pre-release screenshots and videos, so much of its charm comes from being a tiny skateboarding bird traversing gigantic (relatively speaking) human environments. As the game’s Steam description states: “Grind on bendy straws, kickflip over staplers, and carve killer lines through cardboard and sticky tape parks”. On a rooftop, very little of that aesthetic charm comes across, and it makes me wonder if the developer could have chosen a more inspiring level.

Still, we won’t have long to wait until we can try out the full game from start to finish. SkateBIRD launches on PC, Switch and Steam later this year.