As a kid I only had one dream: to be a train driver. Thanks to Thomas the Tank Engine, and countless trips to parks with miniature railways to ride on, they became an obsession. That dream has since faded into more sensible ones, such as financial stability, or learning how to be happy for once in my goddamn life… ahem. Though I don’t have that sort of fascination with trains anymore, I will always have a soft spot for them. However, when I saw Sweet Transit I got filled with a renewed sense of excitement. A city-builder simulation game with a focus on trains? Sign me up!

The debut title by solo developer Ernestas Norvaišas, Sweet Transit is a simulation game set in an old-timey world where the sole method of transport is by train. In a similar vein to Factorio, you’re provided a map brimming with resources, and through a process of establishing settlements and railways, you will be able to harvest these resources to expand your industry. 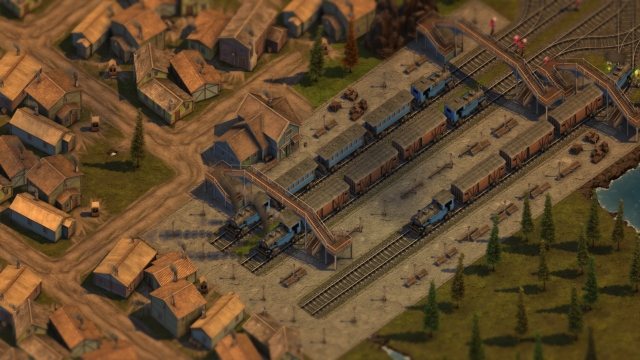 They call this setup the ol' Requiem for a Steam

You start off by building a warehouse which acts as your main storage and is the central focal point of your map. From here, you’ll need to establish a village near a body of water, as you’ll need villagers to become workers, and they’ll need to fish for sustenance. Starting small, you can plot out your village with a town hall, homes, and roads to help the villagers move around. Now you’ll need to start harvesting those precious resources! Wood is needed to expand your villages, and coal is required to fuel your trains. Both villagers and resources can only be transported via rail, so your village will need its own station. After the station is built, you’ll construct your first railroad. I kept mine simple with a straightforward circuit that went to a coal source, but you’re free to build it as you wish as long as you can afford it. The resources will need their own mining camps with dedicated stations for your trains to stop at. Most importantly, you’ll need to construct a train depot to actually create trains and attach it to a section of the railroad.

Train construction is simple; you start with a basic locomotive, then you can choose what sort of carriages it will carry, with dedicated ones for passengers and for the different resources. A route needs to be assigned to each train after they’re built, so you can create one from your village to the coal mine, specifying if the train will carry passengers to work the mine and then return them home or if the train will transport the mined resource back to your warehouse. It’s a pretty standard loop for this sort of city-management game, and you’ll slowly work your way up to needing more varied types of resources to expand your empire. 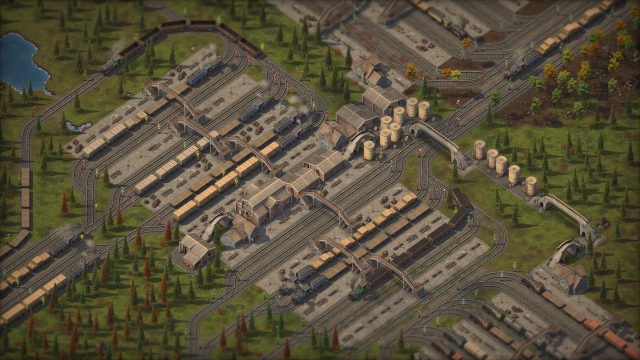 Come on now, this is just showing off

I found myself particularly taken by the visuals of Sweet Transit. Although cleaner and more detailed, the graphics channel the energy of management games I played when I was younger, like Railroad Tycoon 2. The soundtrack similarly hearkened back to those times, with its ragtime nature finely encapsulating the time period.

Where Sweet Transit really shines though is the railroad management. It starts out simple, with a standard circular system being enough to get the wheels in motion, but as you build more villages and require more resources, you’ll be constructing multiple different railroads and routes, many of which will need to merge with others. If you’ve played Factorio, you’ll already be familiar with the signaling system, but as someone who didn’t get too far in that game, I had to learn it fresh in Sweet Transit. 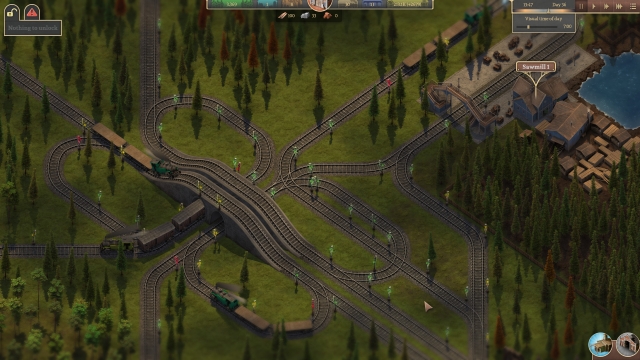 Try navigating this route with your GPS

I won’t lie, I found it a bit difficult to get the hang of the signals initially, but there’s a helpful tutorial scenario to give you sufficient practise. There are two types of signals: the standard ones, which will read if a train is occupying the next block of track after the signal — each block of track is bookended by a signal, so you can place as many as you want on a stretch of track to keep the blocks open — and also the chain signal, which instead checks the status of the signal ahead of it. I found the chain signals a little confusing at first, and I’ll still require a few more hours to feel completely comfortable throwing them en masse into my rail network. But the good news is that you’re not required to use them, you can rejig your railroads to utilise standard signals if that’s to your satisfaction.

Sweet Transit’s wealth of functionality through signals and junctions allows you to work your way up to a healthy rail network that’ll truly satisfy fans of intricate management sims. With more features promised, day-one mod support, and a trove of guides both in-game and online to help you make the most of your railways, Sweet Transit is shaping up to be a solid title that fires on all cylinders.

Making money but the bank won't believe me