The Invincible puts you into the shoes of Yasna, an astrobiologist, as she explores a Mars-like desert planet called Regis III. Seemingly alone in this desolate land, her only companion is the voice of her fellow crew member Novik coming through radio. Serving as a navigator, supervisor, and familiar voice, Novik provides both commentary and advice as Yasna reports on her various findings. Their conversations give you a bit more context about Regis III and the current state of the human race.

The game’s preview starts midway through a rescue mission, where Yasna is searching for a missing crew that went mysteriously silent. You’re asked to fetch logs from the crew’s ships and save any potentially surviving members. You soon encounter remnants of the lost astronauts — various abandoned vehicles and tools designed with an atompunk aesthetic. I really enjoyed the art style here, as it’s a bit similar to Fallout with that classic retro-futuristic look. Every dial, switch, and meter is completely analog and you’re able to tinker around with some of it. Also, my first impression of Regis III is that it’s crisp and immense. It gives a very lonely feeling, as ominous stone cliffs and rock formations completely surround you. As the demo rolls along, Yasna is consistently relaying everything to Novik. This helps the player better understand what’s going on as well. It’s similar to Firewatch, a game where you are completely alone in the forest aside from a friendly voice guiding you over comms. I’d anticipate that a significant portion of the full game’s story will be told through this dialogue, and possibly explore the relationship between Yasnna and Novik in more detail. It’s apparent they have a long history with some tension between them. I felt the voice acting was impressive, which is pretty crucial in a narrative game like The Invincible.

You also encounter a couple active robots on Regis III — apparently the only “living” beings currently on the planet. They reminded me of robots on sci-fi book covers from the ‘50s and have a really unique design. In my opinion, the art style and graphics are the highlight of The Invincible and appear very well done. The world looks great and its robot inhabitants move realistically, truly resembling an early vision of the future come to life. This preview didn’t include any combat sequences, and it doesn’t seem like the game will support them. Though you do possess a map, radar, metal detector, and monocular, and are explicitly instructed when to use them, I’m interested to see if less guidance is given in the full game, requiring you to experiment a bit more on your own with these tools. While The Invincible offers first-person linear exploration, you do have the option to choose from a few different dialogue choices. I’m not sure if these will change anything other than how your conversations go, but there’s potential for branching storylines and multiple endings.

As for negatives that might make it into the full game, I did encounter a few minor ones. First, there was a strange camera snapping effect whenever I’d finish interacting with an object. Second, a bunch of settings are just in Polish, since The Invincible is being developed by a Polish studio. I’m hoping translations are provided, with accurate localisations, when the game releases. Lastly, some might dislike that you have to provide a bunch of arbitrary key inputs to do certain things like climb a ladder, instead of just triggering a smooth animation by walking up to it. 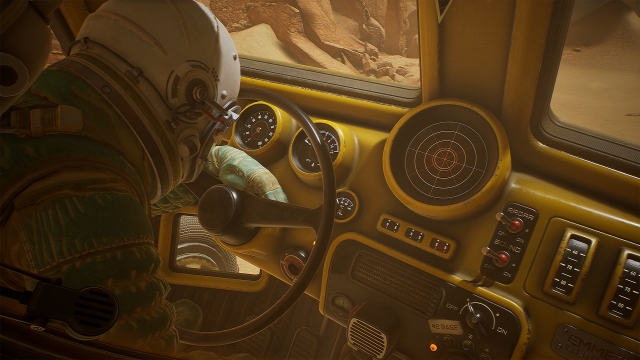 The Invincible’s preview was rather short, at around 25 minutes long. During this time, I was able to get the gist of the game’s plot and themes, which revolve around technology, space exploration, alien life, and evolution. In fact, the game is directly based on a popular hard science fiction novel by Polish writer Stanislaw Lem. Regis III is a very realistic world, with seemingly plenty to explore. There are even some light horror elements as you wander through the desolate planet trying to figure out what happened to the lost crew. I’m very much looking forward to seeing where the story goes, since the preview cuts off quite abruptly, and just as things are heating up. From my brief experience, The Invincible is definitely a title to keep an eye on, and it’s slated to release on PC sometime in 2023.