After smashing through the three million sales barrier earlier this week, it’s safe to say Valheim has been a revelation in the early parts of 2021. Created by the five-person team at Iron Gate Studio, Valheim has continued to succeed, breaking all expectations week after week. I, like most of the gaming world apparently, have found myself lost in Valheim’s often calm but otherwise ruthless world.

Valheim has certainly benefited from the current global crisis we find ourselves in. The sprawling map and combining multiplayer interactions with a game that most budget computers can run has helped reconnect gamers after almost a year of isolation. Yet, for those who haven’t ventured into the world of Valheim, there is a lot more that has played into the game’s success beyond keeping us all linked in these otherwise lonely times. 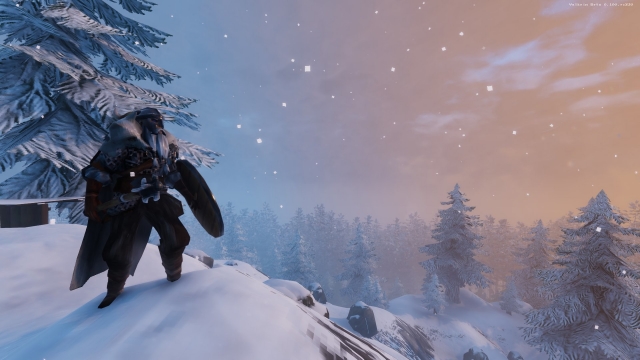 Valheim is a game all about depth and fair progression. It allows players to venture through its world at whatever pace feels comfortable to them. Of course, rushing through and clearing out the game’s bosses is an option, but sitting in the safety of the meadows whilst spending all day fishing is a viable choice too. Despite the game’s refusal to hold the players hand, Valheim offers a simple understanding of how to play. Performing an in-game action improves your skill, while picking up an item for the first time will unlock any related crafting recipes. Even for the people struggling most with the game, the crow Mugin guides the player with some primitive instructions. Mugin’s appearances become more infrequent as you progress, before you ultimately never see the helpful crow again.

Survival is a straightforward system in Valheim: Keep yourself warm, dry and fed, and you’ll find yourself having a much more enjoyable time. The little things in Valheim add up. For example, rain will damage structures and put out fires that aren’t covered correctly. In addition, fires covered a little too well are going to cause the player damage due to smoke inhalation. The small lessons are a reminder of how quickly players can be brutalised by the world of Valheim – and that’s a part of the game's running theme. A survival game that can get on top of you but is easily maintained if you don’t get complacent. The mechanics are in place to ensure an easy to learn yet hard to master experience. It’s something that is especially present when building in the game. Building a crooked old shack to get you by is a simple task. It’s the large buildings that require more planning and attention. Hard, yet rewarding work and a task you’re willing to see through to its completion.

Valheim isn’t flooded with unique content in its current early access state, but the game pushes the minimal content it has far to keep players engaged. The reality of Valheim is that it’s a third-person survival game that cuts the overbearing content that is so often seen in survival games. By unclogging itself of the mundane tasks we often see, Valheim ironically now offers us a more engaging experience. Rather than hopping from each new thing, the emphasis is placed on learning and mastering the basics at your disposal.

Valheim makes itself visually appealing with its minimalist approach. That approach allows for a lower bar of entry for players with weaker hardware hoping to get involved. It opens up the game’s multiplayer potential, resulting in an accessible online game with dozens of hours of content before any major updates are implemented.

Future updates are already fully laid out for fans of Valheim to excite themselves with. It’s clear Iron Gate Studio have a structured plan going forward, which is no doubt allowing players to invest themselves in the game further. Often, we see videogames appear in an early access state without much of a plan but delivering an interesting concept. Valheim is looking to refine a concept we have seen plenty of in Steam’s Early Access scheme, whilst offering evidence of a clear plan for the game's future.

That structured plan is what has players excited going forward. Valheim, upon its initial early access release, was clearly aiming for a refined gameplay loop as its foundation to keep its user base engaged. Adding a full road map to showcase the direction of the game from day one is a clear sign that Valheim is a game that’s using early access like it’s intended to be used: Providing a solid foundation experience on release, with the later structure already planned out ahead of time.

The future of Valheim seems to be in safe hands. With the overwhelming positivity around its initial launch, incredible success and long term plans already set out, it'll be interesting watching the game’s growth over the next few years.