Recently, we have seen a resurgence in the side-scrolling beat ‘em up genre with games like Streets of Rage and Battletoads making a return and sticking to their roots. 9 Monkeys of Shaolin feels like it takes inspiration from both of those titles along with Golden Axe to make a solid experience with surprisingly diverse combat and a robust skill tree.
You play as Wei Cheng, a local fisherman whose village gets invaded by Wokou pirates causing Wei to step up and defend his people. Unfortunately, you meet your match with the leader of the Wokou pirates as your fight with him leaves you critically injured. As you are hanging on to life, Shaolin Monks come to your aid and restore you to health while also training you to avenge your village and send those Wokou pirates back to where they came from.

Sadly, 9 Monkeys of Shaolin’s story failed to grab me past its opening moments simply because it feels like it slows down the pace of the game significantly. Most of the story from there on out is told through floating heads and dialogue that can be hard to follow when you’re hopping from mission to mission. The final enemy was rather disappointing as well since he only had two moves he would do constantly, which were easily dodgeable. Luckily, the missions and combat are quite enjoyable and last just long enough to make the game not feel repetitive. 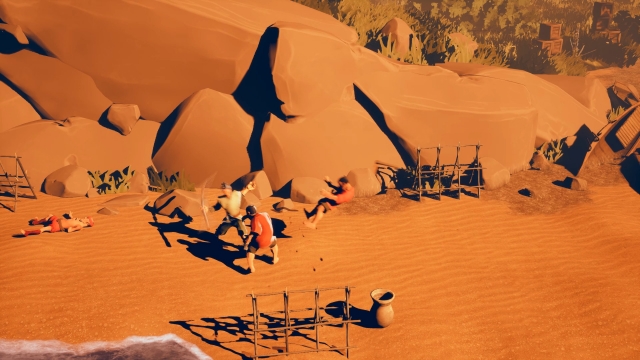 As mentioned previously, 9 Monkeys of Shaolin plays similar to other side-scrolling beat ‘em ups from the past as you move from left to right fighting enemies in order to proceed further. What is surprising is how varied the combat is for such a short experience (around five hours). Your only weapon is a spear, but you’ll find various spears as you play that have different passive abilities like inflicting bleeding or poisoning an enemy. With whichever spear you choose, you’ll have the basic moves that you’ll get at the start: kick, strike, thrust, dodge on the face buttons and parry on left bumper, but as the game progress, you’ll learn a few abilities including ‘Southern Elements’ and ‘Ground Seals’. You can use a mouse and keyboard, but the game recommends a controller.

Southern Elements is used with the right trigger and changes your basic moves to new abilities such as a spear spin to hit enemies all around you, a ground pound and an uppercut. Meanwhile, the left trigger lets you use Ground Seals which changes your basic attacks to more mystical abilities that can slow down enemies, knock them in the air or pull them closer to you. Using these abilities requires Qi which you only have three bars of. Southern Elements require one bar while Ground Seals requires two, but building Qi back up is as simple as fighting enemies with basic attacks. The basic attacks can also charge up to do more damage as well, but they also require one Qi bar. 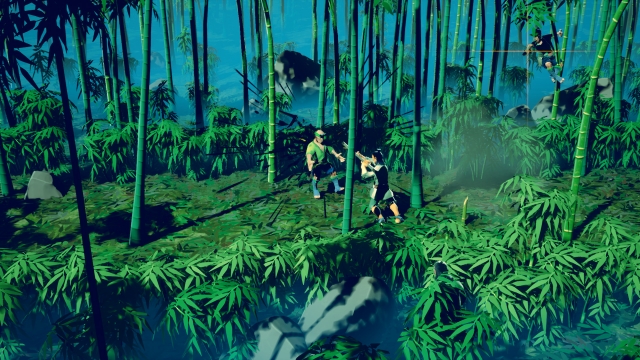 With all these combat mechanics working together, 9 Monkeys of Shaolin is quite fun to play as you can combine all your moves to make some awesome combos. An example of this would be using the Ground Seal to pull enemies towards me and then using the Southern Element spear spin to hit all the enemies at once for some good AoE damage. You get most of these abilities early on and nothing really gets added afterwards, but the skill tree available is pretty robust so much so that you won’t be able to get everything on your first playthrough.

There is a skill tree for all the abilities you can use including the basic ones you start with. After every mission you receive skill points (which oddly looks like a boat’s steering wheel) that can be used in the main hub area where you’ll choose missions, equip different spears/gear and equip secret masks you can find during missions. Most of the upgrades for each skill are used to enhance the ability to do more damage, expand the attack area or increase how many times it can be used. After one playthrough I only filled five out of nine skill trees, but you can always go back and replay missions if you feel the need to complete it. 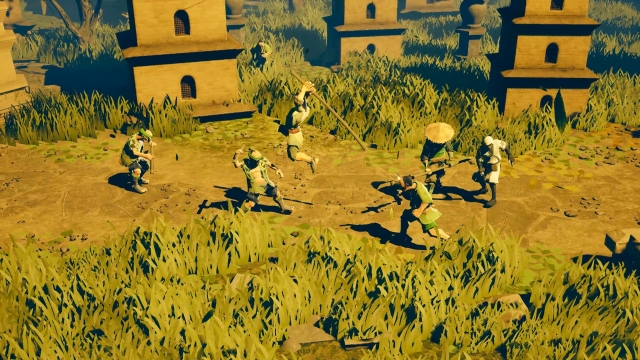 While missions can give you spears and skill points, you can also receive various arm braces and shoes that can be equipped the same way as the spear. These items give you similar passives to the spears but focus more on defensive or mobility, whichever suits your playstyle. Missions also contain various teas including green tea which heals, red tea increases damage, yellow tea restores Qi and white tea provides a shield. These can be found by breaking crates and barrels during a mission, but are only used for that mission, so if you find a lot of green tea for healing, might as well use as many as possible since it won’t come with you in the next mission.

Visually, 9 Monkeys of Shaolin doesn’t look particularly bad in terms of environments and lighting, but its character models do look like clay rather than actual people. There is a good amount of variety when it comes to mission locations and the majority of them look great, all while running at a smooth 60FPS at ‘Maximum’ settings. There was one glitch that caused an enemy to spawn under the map and when I tried to reset the level, it glitched my camera completely causing me to go back to the main menu, but this happened once.

9 Monkeys of Shaolin (Reviewed on Windows)

9 Monkeys of Shaolin is an enjoyable time for any side-scrolling beat ‘em up fan who’s eager for some engaging and varied combat, but don’t expect to be enthralled by Wei Chang’s story.

GDC 2018: 9 Monkeys of Shaolin for the ID@Xbox Program