Cubes, buttons, and experiment rooms — no we’re not talking about a new Portal game but Aethernaut, a recent release by one-man developer Dragon Slumber. Inspired by both the Portal series and The Talos Principle, will this game shine a new light on the first-person puzzler genre?

You play as the latest — and last — in the line of titular Aethernauts. What is an Aethernaut, you ask? No idea exactly, at least not until the story point that illuminates things a bit more, but the short version you get near the start is that they are the last hope to save the world. A chap by the name of Cornell makes contact with you in the first couple of rooms of a dilapidated research facility, slowly explaining what on Earth is going on as you progress through the various rooms, solving increasingly complex puzzles. 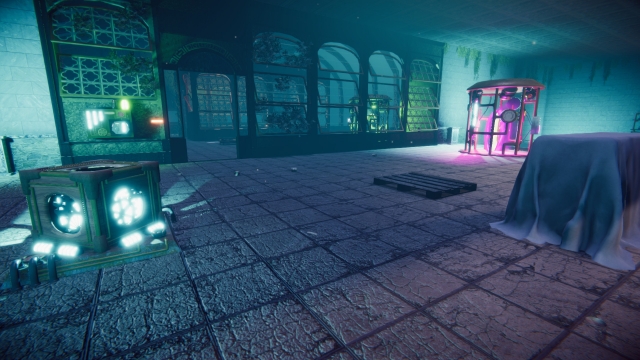 The experiments are based around an alien substance called “aether”, which the scientists of the facility contained within cubes and utilised to various effects. There are three primary types of aether: light cubes (the cyan ones) will spread an aura of light, shadow cubes (the magenta ones) spread an area of darkness, and later on you’ll learn about time cubes (the green ones), which freeze mechanisms in time. Each aether cube only actually does anything when it’s inside of something else (usually a lamp post), and the basic gist revolves around shining light — or shadow — on door locks to get around. It gets more complex than that of course, but the game takes a very hands-off approach in terms of the puzzles themselves: the experiment rooms will simply leave you to get on with things, offering no guiding light at all on how to get to the aether vial which serves as the completion check mark. Even the tutorial levels give you only a brief overview of the what, and let you figure out the how yourself.

The gameplay is fairly standard for the genre; you move around, you pick things up, put things down, and repeat until the puzzle is solved. You do have the ability to actually use both hands, something which shouldn’t sound revolutionary but somehow still feels it! Each hand has a main (grab hold/let go) and secondary (put in/take out) action, and if you try to press a corresponding button without a matching interaction then the game will try to default to whatever is closest (for example, putting down the item in your left hand if your right hand is empty).

Puzzles are split into zones, with each group having similar difficulty levels. If an area is unlocked via a tutorial level then you can expect the new mechanic to be involved in pretty much every puzzle there. There are several new things that Aethernaut manages to introduce with only the three types of cubes, including portals, time travel, and even alternate dimensions! Once you’re past the first two hubs, you are free to explore as you desire, with only the occasional tutorial room casting shade on your progress forwards. 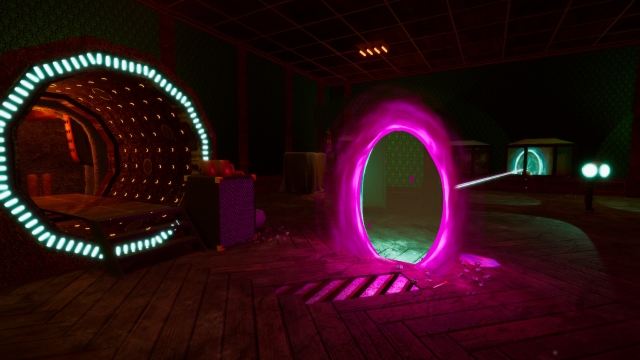 Puzzles do get steadily harder, mostly due to the various additional mechanics; luckily you don’t need to complete all of them unless you want the completionist ending, as you only need to complete about 65 of the 95 puzzle rooms to finish the game. If you find things are just too difficult and you wish to continue the game and learn the story, there is a menu option to force all doors open for the current puzzle (thus allowing access to the room’s aether vial). It is also possible to get stuck in any given room due to bad movement of pieces; however this won’t softlock you as the menu also allows you to reset the current puzzle to its initial state. I had to use this feature many times, as it is surprisingly easy to lock yourself in a room in later levels!

Aethernaut's story is fed to you in small doses: every time you pick up an aether vial, Cornell will say a few lines, shedding light on either the background of the world or his personal situation. Additionally, he’ll ask you to find a polling booth every so often, asking philosophical questions with a choice of two conflicting answers. Ultimately, however, your choices make no difference to anything, which was disappointing. The credits did reflect those choices, but only as a recap of what you picked; the type of ending you receive is wholly unaffected by the poll questions. Outside of the questions, the storyline touches on similar philosophical topics as Cornell talks to you. I won’t go any more into it, as I feel it is one better experienced than told; however, I will note that I found it to be an overall average story.

Moving onto audio, the voice-overs are weirdly loud compared to the rest of the sound, and have a bit of distortion to them as if the microphone was peaking during recording. The music itself is pleasantly atmospheric enough, but not all that varied; I barely even noticed it was there most of the time, although each area did at least have its own style. I shouldn’t need to go into detail on sound effects, although I will note that the footsteps were noticeably audible for some reason. 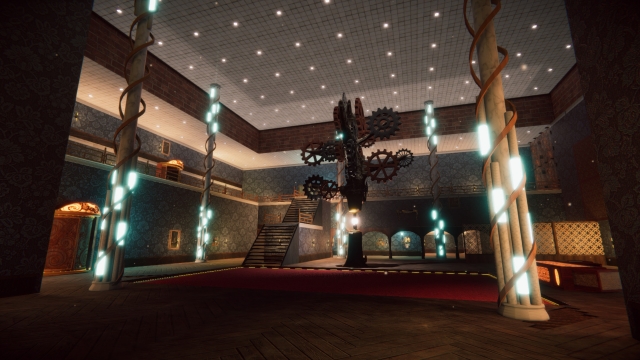 On the visual front, I experienced several issues. There was a fair amount of tearing, the framerate was never smooth even though Aethernaut isn’t a demanding game, and there was a lot of stuttering. Changing the (limited) settings didn’t really change anything on any of these fronts either. That all said, the steampunk aesthetics looks pretty decent and the environment was clearly on the losing end of a fight with nature, shining a great spotlight on the fight to save the world. The later zones — in particular, the Vivarium and the final area — introduce their own unique looks that really drive home the alien nature of aether.

There are a couple of other things I’d like to make note of. Firstly, there were several objects that failed to load in correctly and doors that didn’t open when needed, thus breaking the room they were a part of. Saving and reloading fixed it in every case, but it was still irritating, particularly when it happened several times. There were also a couple of puzzles that I feel I solved using unintended methods, although I also couldn’t figure out any better solution. On a related note, I didn’t finish every experiment as I couldn’t fully wrap my head around the time travel and dimensional mechanics, although I did push myself to not use the auto-solve option (except to see how it works)!

The settings also offer a small number of accessibility options. Each type of aether can be re-tinted using a slider to aid those with colour-perception issues, and there is also the ability to assist jumping. Dragon Slumber is pushing out constant small updates to address bugs and issues as well, which is a pleasure to see as well as a commendable effort for — as mentioned at the start — a one-man team.

All-in-all, Aethernaut is a pretty decent title. Whilst it may not be the most shining example of the genre, the gameplay stretches the brain cells enough that it should scratch the itch!

Aethernaut brings one core idea to the table and backs it up with solid and varied gameplay on a level comparable to the original Portal, although the audio and visual aspects suffer.