My relationship with tactical games has been a tad strained in the past, with my love of strategy often running up against unlucky outcomes or my own poor time management skills. Thankfully, Alder's Blood: Definitive Edition, developed by ShockWork Games and published by No Gravity Games is here to mend that relationship a tad. It is set in a dark, Victorian-styled world where God has left everyone behind and his remaining corruption has seeped into the very fabric of the setting, creating wretched monsters, and rapidly changing the weather. This leaves a group of vagabonds to work towards saving their world and possibly finding a way to bring God back to them. Led by the player in the role of the Chief, this group (known as the Hunters) has been exiled from the same society they work to save because of their strange abilities. In many ways, Alder’s Blood is a lighter version of your typical XCOM or Fire Emblem experience that doesn't have any time limits or chance-based actions, though with a greater focus on stealth, as the creatures the Hunters face are often far more powerful than they can hope to be. All of the player’s successes and failures come down to their own skills in manoeuvring around enemies and staying out of sight in combat. 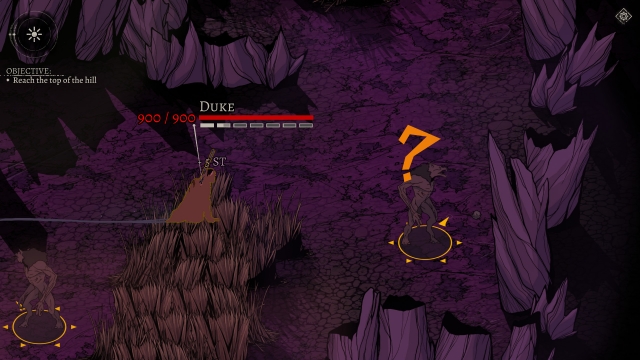 Or at least, that’s how Alder’s Blood is supposed to work. In practice, the earlier and later moments of the game have various unique struggles in achieving fun gameplay. However, when Alder’s Blood does play as intended, this strategy RPG is a joy to behold. Once the enemies have grown to a point where they are far too numerous and have vastly higher health pools than the Hunters, every battle starts to require a great deal of thought and careful planning. In most missions, where the goal is more to investigate an area, possibly kill a small handful of enemies, and escape, every conflict becomes a maze that requires a careful balance between the Hunters’ stamina, stench, noisiness, and the monsters’ vision range. Ignoring any one of these factors could easily lead to a painful end to a given mission and even that Hunter’s life.

These sorts of difficult decisions extend to even outside of battle, requiring the player to think about which Hunters and items to take into battle. Should one give a Double-Barrelled Shotgun or a Marksman’s Rifle to a Hunter with high stats in Vision and Stamina — which would allow them to use those powerful weapons to better effect than an average Hunter — or is the added length to their Smell Range too much of a hassle with how it could alert any passing creature to their hiding place? However, it is questions like these that, while engaging when the game is at its best, can reveal flaws in Alder’s Blood’s longevity. In the early moments with the game, resources are intended to be scarce and that also extends to weapons, so players have to make do with the starting equipment. While many of these tools are not always the best ones for a given job, they are serviceable for these easier moments. It’s even possible to treat Alder’s Blood like it isn’t a stealth strategy game and just kill every single enemy in sight with hardly any cost to the player outside of time. This leads to a sort of disconnect, where the player is told by loading screens and the storyline itself that these monsters are horrifying and best left avoided but also taught that those same creatures can be easily torn apart like wet tissue paper. 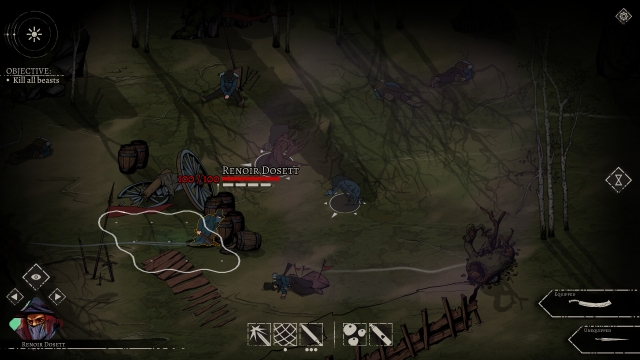 While something of a boring example so far, this is perfectly natural and expected for a title like this and we could imagine that, as Alder’s Blood moves on, a player could find, buy, and craft more impressive items and weapons to replace the ones they had gotten used to with other pieces of equipment that might be more specialised to a given situation. The game follows this path for a short while, but as the game passes its midpoint (or even earlier than that, if the player is more interested in the Camping features), it frees up access to some of the best weapons in the game. One such example is the Harpoon Launcher, which provides a relatively significant range, deals a respectable amount of damage, immobilises whichever enemy is shot and thereby keeps them from moving on their next turn, and doesn’t even make a sound or increases the equipping Hunter’s Smell Range. Sure, there are weapons with higher stats, but the Harpoon Launcher can easily take any player through to the end of the game as a perfect tool for stealth. The only real downside is that this weapon is one of the more costly when it comes to Stamina, but most Hunters have enough range in their Movement stat that they can fire the gun at a troublesome enemy and run clear past them on the same turn, all without alerting any other enemy or giving the pesky creature in question a chance to retaliate. By the endgame, I personally never switched out my weapons. I never needed to, because my basic strategies usually just worked without fail.

In the title’s latter moments, the game returns to bordering on being too easy and repetitive, though when it is working as intended, the available missions do a good job of cycling through different objectives and map layouts that combat any boring gameplay, even if most of them fall prey to these simple strategies. If this were all that was going on, I’d personally just be a tad disappointed in the experience, but happy enough to treat the game as something to play through in the background while waiting on something else. However, it is in these moments that most of Alder’s Blood’s bugs start to crop up. A handful of these are plain annoying, such as the weapon switching mechanic not actually swapping out the various weapon-specific actions for the Hunters to use and requiring the player to swap between the three Hunters they’ve taken into battle to actually force the game to recognise that one of them is holding a knife and not a rifle. Another example lies outside of battle, where the animations that pop up when making camp for a night or travelling to a new location can remain on the screen indefinitely if skipped through. Frustrating, but reloading the last autosave tends to clear these up quickly and allow progression. What’s less forgivable is the fact that several missions in the game are simply impossible to complete. On more than one occasion, the player is tasked with killing a given amount of enemies in the area around them, but the counter for those objectives never ticks down to zero, leaving the mission incomplete no matter how many monsters the player murderises. The worst part about this last bug is that both of the moments where I ran into it, I was on very late missions in two different long-running side quest chains that seemed to be nearing their conclusions. I’d finally gotten invested in these storylines, but was denied from seeing them through to the end. 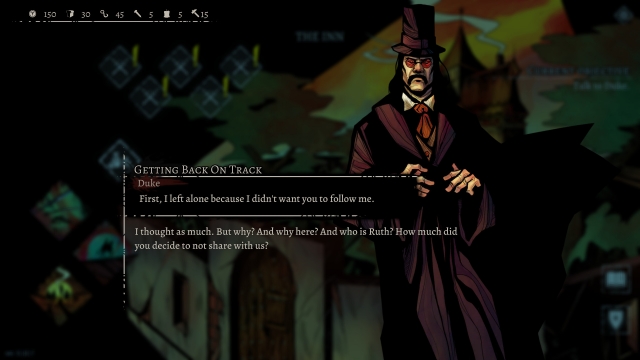 Thankfully, the storyline and dialogue-writing comes through for Alder’s Blood, offering a series of intrigue-filled quests and unique characters that do a good job of maintaining engagement. After a somewhat slow start, every moment is filled with multiple scandals and conspiracies unravelling at the seams, making this title a perfect fit for mystery lovers, particularly those with a Lovecraftian bent. There’s a minor visual glitch that can crop up where the last line that a character says will briefly display (for roughly a split-second, I would wager) before that character says their next line, though the most this ever did for me was make me worried that I had accidentally skipped a line of dialogue.

Following the narrative’s trend, the visual display behind Alder’s Blood: Definitive Edition was decidedly solid. There isn’t anything truly worthy of being described as splendorous, but neither is there much to criticise. The monsters have their own looks, with the Brawlers looming large with their bulging muscles and werewolf-esque frames and the Floaters looking strangely ethereal. Each NPC that the Chief can speak with appears with a full-body profile that brims with personality. The Hunters themselves look a bit generic and unimpressive, but given that none of the playable Hunters are actual properly realised characters, I can certainly cut some slack. 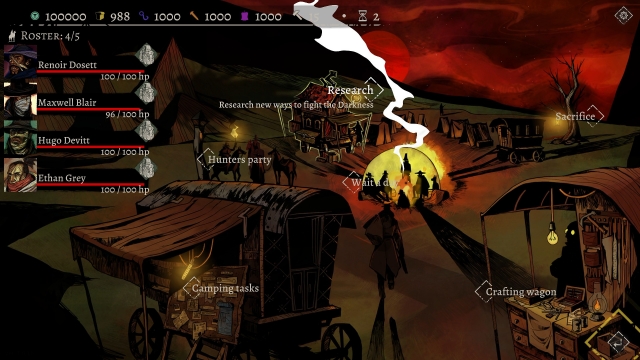 To be perfectly frank, if it weren’t for the bugs, Alder’s Blood: Definitive Edition would be a solid strategy RPG. Certainly not the best, what with the game only truly shining for brief moments, but its undeniably good presentation and unique smell mechanic that synergises well with the title’s stealth focus would normally set the title apart. However, if one wanted to enjoy Alder’s Blood on the Xbox One, they’d have to accept that the game cannot provide a complete package in its current state.

A solid experience worthy of some small praise when it works, but Alder’s Blood: Definitive Edition is so marred by bugs that I cannot in good conscience recommend the game. God is dead and, so long as the game remains unpatched, God will remain dead.