All Walls Must Fall Review

All Walls Must Fall (henceforth known as AWMF, as I'll be buggered if I'm typing that out over and over again) markets itself as a "tech-noir tactics" game. It features all the various bells and whistles you might expect from any game demanding the player employ "tactics" in order to progress - an isometric perspective, cover mechanic, real-time exploration with turn-based combat and, in a somewhat novel approach, the ability to manipulate time. It also includes a great many gay bars, conversations loaded with sexual innuendo and shirtless men jigging about to a throbbing electronic soundtrack. So... probably not something you'd give your ten-year-old nephew to play.

AWMF takes place in Berlin 2089, where the Cold War never ended and the wall is still standing. The city remains divided along ideological/political lines, and both sides watch each other with wary vigilance. All is business as usual until a rogue nuclear detonation obliterates vast tracts of the metropolis, whereupon East and West both send covert operatives back in time to find those responsible and prevent it from happening. In pursuit of this goal, you spend almost the entire game infiltrating or shooting up gay nightclubs all over Germany (but more on this later). Think a blend of Quantum Leap and Terminator, with homo-erotic overtones.

You don the buttock-hugging leather trousers of Kai, an agent with the East German STASIS. He's also a very large man with a metal arm. STASIS agents are cybernetically enhanced and equipped with technology allowing them to essentially rewind time; something that proves damned handy in short order. Standing in a doorway when someone shoots you in the stomach? Hit the undo button, remove yourself from the gunman's line of sight, and press play. Hurrah! No more desperately holding your intestines in while you shriek like a foghorn and dribble blood all over the linoleum. Kai concludes time travel is both confusing and potentially fatal.

You would be forgiven for thinking all this messing about with time is likely to make things dreadfully easy. To counter this, Kai's ability to manipulate the timeline is wholly dependent on his TR (Time Resource). TR is both depleted and replenished during the course of a mission, depending on how Kai chooses to go about it. For example, exploring a level and discovering new areas will increase TR, but wandering aimlessly between already revealed areas will steadily deplete it. Likewise, hacking doors, drone consoles and scanners will take a hefty chunk out of your TR pool, whereas successfully resolving a combat encounter will provide a sizeable TR bonus. At mission's end, the size of your remaining TR pool is directly proportional to how many credits you receive by way of reward. These credits can then be spent on various upgrades, specifically weapons, skills and augmentations. In AWMF, time really is critical.

Right, so what about the gay bars, then? I was just getting to that. At the beginning of each mission, Kai's given a briefing by his handler. Once you've been apprised of your objectives, you enter the pulsing, neon-drenched interior of the local hangout for men of a fabulous disposition. I've spent just over four hours playing AWMF, and every level seems to take place in a gay bar. I mean, the game's called All Walls Must Fall, not Gay Bar Simulator 2018. So... why? Well, probably for a couple of reasons.

First and foremost, the conversation mechanic used employs a pendulum-like system that swings between scared/flirty/respectful on the positive axis, and angry/disgusted/critical on the negative. Obviously, Kai attempting to gain access to restricted areas by flirting with heterosexual men would probably result in him getting shot in the face. In that respect, the mission locales make perfect sense. Secondly, inbetweengames are probably just being inclusive, and why not? It's not as though the market is creaking under the weight of games featuring characters with alternative sexualities. And before anyone starts frothing at the mouth, rest assured AWMF is not some social justice soapbox where the player is harangued for their shameful intolerance of anything other than the beige and mainstream. The gay bar aspect is purely incidental and very much part of the scenery. You'd have to be the sort of miserable, self-flagellating puritan who wears underpants made of broken glass and piranhas to find something objectionable here. Having said that, once you've seen one gay nightclub you've pretty much seen them all, and the lack of variety does become a bit wearisome after extended play. Sweaty men, some of whom don't appear to be wearing trousers.

Thankfully, the combat in AWMF keeps things fresh, interesting and satisfyingly bloody. When it comes to gaining entry to a club, you generally have three options. You can hack the security system, you can talk your way in, or you can kick in the door (later, selecting the cyberfist upgrade will let you punch a man-sized hole in the wall). Even if you opt for hacking or persuasion, sooner or later you're going to fail and you'll have no choice but to kill a lot of people. Killing a lot of people is one of the things AWMF does best.

As soon as combat begins, the game switches from real-time to turn-based and you spend the next few minutes scampering from cover to cover, shooting at enemies while attempting to avoid having bits of your anatomy blown off. You can dash to move quickly between environmental objects, but dashing costs more TR than walking so sprinting about the place willy-nilly will see you swiftly run out of time. You'll also need to reload your weapon, which takes an entire turn and can leave you vulnerable if you're not positioned advantageously. Offensive actions consist primarily of tap and aimed shot. The former does little direct damage but stuns an enemy temporarily. Once stunned, aimed shot can then be used to take them out. It's a synchronised ballet of gratuitous violence - stun, kill, move, reload, move, stun, kill - and getting your pacing right is paramount.

Inevitably, you're going to bugger it all up and get shot. The game will warn you of any incoming fire likely to hit, and you're given the opportunity to plan your next move accordingly. Should you chance another shot at the thug hiding behind the shelving, or would relocating and reloading be more prudent? Pushing the envelope usually results in a gaping chest wound, but AWMF rewards a little risk-taking every now and then. I found I'd get away with the occasional reckless action (albeit by the skin of my teeth), but for every coup de grace there was a humiliating expiry in a pool of my own bodily fluids. Rewinding time with the undo button rapidly became a way of life. 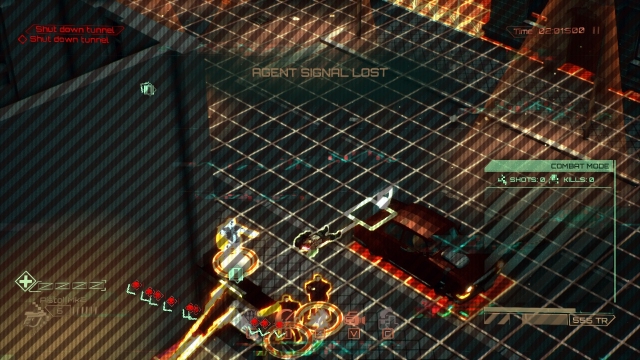 Kai bleeds to death in a gutter after being shot in the back.

Having successfully dispatched a roomful of large angry men in suits, you're treated to what is possibly the game's most impressive display of visceral carnage during which every action you've just painstakingly executed is played back in real-time. Kai sprints, ducks, dodges, slams another clip into his pistol and ruthlessly perforates small armies of enemies, all while accompanied by a thumping electro beat. He's like a hefty, cybernetically augmented, Teutonic John Wick. It's truly a marvel to behold and had me cackling like a muppet.

Graphically, AWMF shamelessly takes its inspiration from comic art. Employing an amalgam of 3D environment models and 2D sprites, the game seamlessly blends the two to create a cyberpunk aesthetic of grim, rain-slick streets illuminated by blinding neon and flashes of gunfire. The crowded nightclub interiors are awash in patrons, and though there's a fair amount of repetition in both environment and character art (and some of the animation looks a bit janky), when viewed as a whole it all works really well.

Soundwise, the game is a feast for the ears. While there's no voice-acting, sound effects are well done and have genuine impact, particularly gunfire and explosions. The music is relentless, energetic, occasionally ominous but never intrusive or distracting, and features some great tracks from a variety of talented musicians. Definitely a high point of the game. 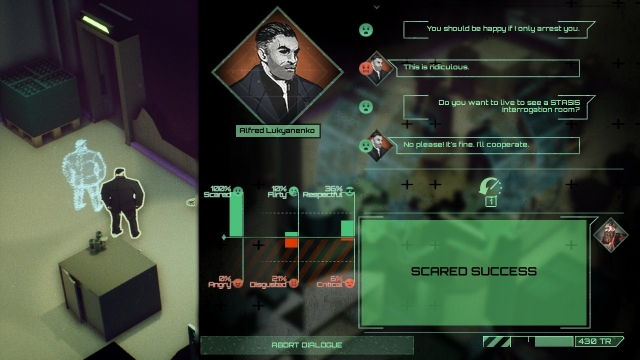 Large German men with cybernetic arms can be unusually persuasive.

Right, so what's wrong with it then? Not much to be honest. Despite the interior of the nightclubs being procedurally generated, the game is fairly short and does get repetitive, so you're not going to get much more than four or five hours out of it. Replayability largely depends on how much you enjoy watching Kai turn a gay nightclub into an abattoir over and over again. The only other criticism I have is to do with the conversation mechanic. Some of the conversations are borderline nonsensical, and they seem heavily dependent on trial and error. During one session I deliberately chose identical responses in three conversations with three entirely different people, each one resulting in success. Other conversations resulted in seemingly unavoidable fights. While not a crippling flaw by any means, I believe the system could do with further tweaking.

AWMF is an unusual game. To employ a culinary metaphor, it's combined a handful of gameplay elements, a novel art-style and some brilliant music, chucked them all into a cauldron and made a sort of bizarre, pungent-smelling casserole. Having tasted it, you're not really sure why it works... you just know that it does. Now, if you'll excuse me, I'm going back for seconds.

All Walls Must Fall (Reviewed on Windows)

Yeah, it's a little repetitive, occasionally frustrating and very short - but I'll be damned if it's not also tense, engaging, and when all goes according to plan, utterly exhilarating.

All Walls Must Fall Preview

All Walls Must Fall