Aporia: Beyond the Valley Review

Aporia: Beyond the Valley is a first-person exploration narrative game with lite puzzle mechanics thrown in Legend of Zelda dungeons. Being a narrative-first game, this review won’t delve into those elements to avoid spoilers. For those expecting some really ingenious puzzles, this isn’t a game for you. To compare, the puzzles are more escape room in nature. Which is a positive for a game like this.

Containing environmental storytelling, being more akin to a walking sim, this game walks a fine line of being too open and vague for a player to appreciate at a steady pace. Luckily, this game manages to maintain a level of consistency, making it easy to appreciate what the developers’ have done for set designs, and the general theming. Where it begins to falter is potentially the game’s scope being a bit beyond what the player will likely experience, or enjoy. The blank canvas nature of the narrative makes this a niche game somewhat. Being more akin to book you’d study for your English exams, it straddles the line of being more of an interpretive story than an experience - as well as having a marmite-like effect. 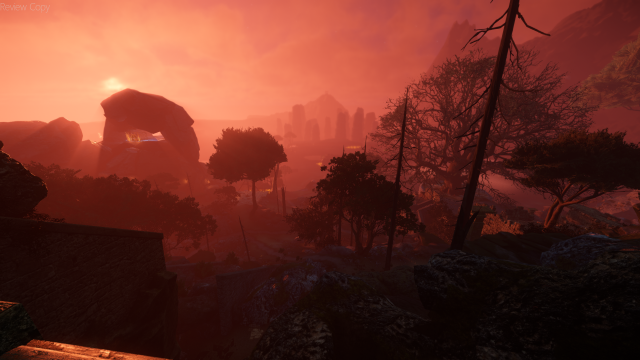 If only real forests were as indulgent as this.

An apt direct comparison would be Gone Home which walked a similar line to this game, but had a much more divisive response. Aporia skits around the lack of gameplay with the escape room-like puzzles. In effect, this breaks the mundane nature of walking around a rather colourful but empty world. The breadcrumb-like delivery of narrative is sometimes hidden from view, meaning your personal interpretation is hindered based on playstyle. The first criticism of the inclusion of the puzzles is that not everything sows into the world as effectively as other puzzles do. Some of them make sense using the natural environment to piece to together, filling an empty reservoir. Done rather tastefully with a logical order of events, but then a traversal puzzle in a cave didn’t exactly fit with some of the other puzzles. One of the more complex and intensive puzzles, involved bouncing light around a map, but felt too video-gamey in that regard. Then there were puzzles that you’d randomly stumble into, being more riddle like, like that one Die Hard movie with the water puzzle and a terrorist bomb.

Whilst the puzzles break the monotony of walking and adventuring, the game struggles to entice the player to actively explore as part of the puzzles in some areas. A location near the beginning of the game features tree houses. As part of the game, it could’ve featured small mechanics incorporated into the exploration. Whilst not being necessary to the main core gameplay loop, it would’ve livened up some of the more quiet areas. But this isn’t to the detriment of the game, rather the silence built a somewhat eerie atmosphere as part of the game’s narrative. Which as stated, can be decisive in nature. 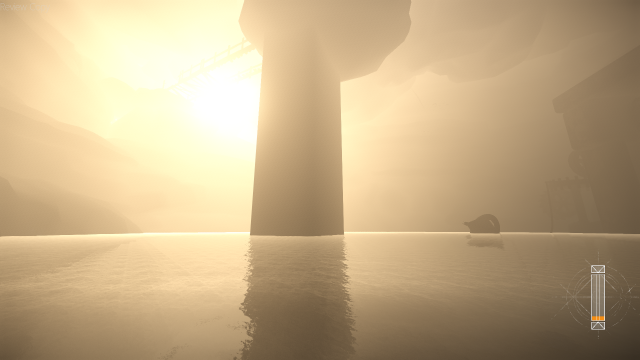 But the lights look so captivating, mustn't go to it.

Periodically you will find breadcrumbs of narrative, but certain pieces will seem somewhat lacklustre with some of the delivery being too hand-holdy. One thing as noted in a previous article (Link) was how tiresome the interaction points are, having to use the mouse to actively pull or twist. On top of this, the game will often forcibly wring control over to say “Look here now”, actively fighting this was disorientating on mouse and keyboard. Camera snapping did occur a few times, but this fits into the main criticism of the game and as a experience being rather hand holdy in nature. But what about the environmental storytelling? Does that stick the landing? “Kinda” is the response.

Initially the slide show like animation is endearing, being very nice to look at as you see the characters of the world interact and go about their lives. But as you experience more of this, it becomes a rather bloated rinse and repeat affair that can lose its charm very quickly - depending on your patience. Its rigid structure doesn’t fully allow the player to think as opposed to see; the interpretation being more order of events and whether or not the actions shown were good or bad. Visually it’s distinctive with the polygonal artstyle, but this abstract art style doesn’t quite fit with how spoon fed some of the narrative is delivered. For instance, some of the scenes could be surmised into a single picture. Because the responses are cut, you as the player, can now come up with how each one acts. Of course as is, the story told is still on point. But it doesn’t go fully creative with freeing up the player’s freedom to interpret, with the chance of overlap being more common. Ironically, these criticisms are thrown into the air with the ending being binary and vague. Elaborating would be spoilery, its use of environmental narrative storytelling is very much a coin toss of artful brilliance or encumbered alignment of what the creator wanted and what the player sees.

Performance wise, the game functions as intended. Minus the hand holding sections, the game performs smoothly. The main takeaway from this is that playing through an external drive can net long load times as well as textures not being loaded correctly. High sensitivity, or having macros for increasing and decreasing the sensitivity is recommended for pull, twist, and turn mouse actions.

Aporia: Beyond The Valley (Reviewed on Windows)

Being rather positive of the game, it manages to stick the landing thereabouts with the narrative told and its escape room like puzzles. Even with the complaints of spoon force feeding, it gives the player enough leeway to think about world. With the abstract take working well, just not as fully realised as some might expect.

Aporia: Beyond The Valley Thoughts and Opinions on Demo

Aporia: Beyond The Valley Developer Walkthrough

I sincerely appreciate online game reviews.  I sometimes feel like the reviewer over complicates the intent of some games.  While giving this an 8, in some players experience it could be near 100%, others due to the lack of challenge, it may be a 2.  my point is, for those of us that like exxploration puzzle games it's more than an 8, but if the reviewer is an action gamer, it might even be rated lower. I've seen plenty of exploration games that were fun to play, but not nearly as fun as Aporia.

Aporia: Beyond The Valley