Everyone who has played Portal wants one thing. More test chambers. But what if the chambers didn’t have just one objective, but multiple? That’s where Area 86 comes in, putting you in the wheels of a little robot who wants to be free. And if it can help other robots at the same time, all the better. 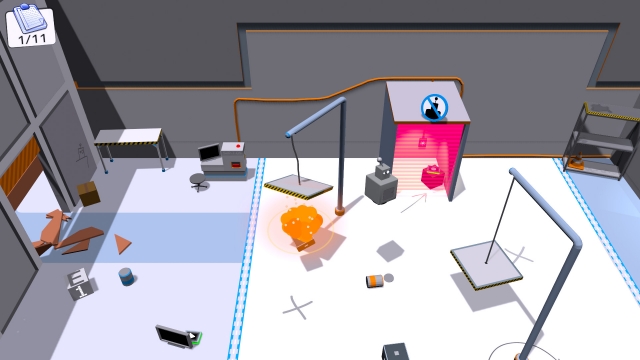 That’s about as much story as you get - you break free of your extension cord and begin doing things to open doors. To aid you in your quest you can jump, carry things, and activate them. Oh, and throw them across the room if you want to. Or need to…

Your objectives are mostly optional, with the main ones usually leading the way to opening the exit. You can see what each one is called by bringing up the menu, but they don’t always spell out what exactly you’re expected to do. What’s more, there could be multiple ways to do it! 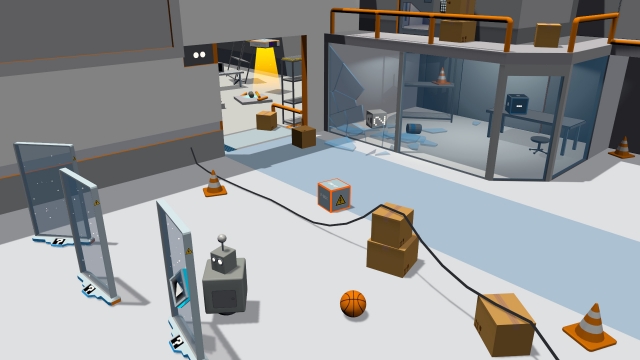 The whole aesthetic of Area 86 is simple and effective. Even with the isometric viewpoint I never struggled to work out what I was doing. Some of the jumps were trickier because of it, but never impossible and the game never penalised me for it. In a similar way, not all of the puzzles are easy to work out, but I was able to complete each of the six levels pretty easily - it was the extra objectives that were harder to work out.

There are hints scrawled on the walls here and there, if you choose to pay attention to them, and in one level a monitor screen ”talks” to you, so there are hints of a deeper story. It’s unfortunate that we don’t get any more than that in these opening levels. Area 86 is a fully released game, but despite this it is still in development. Yes, there are only six levels with a couple of hours of playtime, but what developer SimDevs is calling “Chapter 2” will be released around October 2020. There is also customisation - such as the hat that’s already been released - coming in the near future, and after “Chapter 2” will be local co-op levels.

I honestly had a lot of fun with Area 86, though I feel that due to its lack of content and the fact it’s still a work in progress, it would have definitely benefited from being an Early Access title for now. It’s fun to play, the controls work well and I didn’t encounter any game bugs or crashes. Well, no more than any other physics-based game with breakable objects.

It’s always fun to control a robot that can smash through windows, but the lack of content might put some people off.