As Far As The Eye Review

Escorting a nomadic group of cute, poncho wearing creatures across a vast and uncaring landscape as they attempt to join others at The Eye is perhaps the framing you’d expect for a platformer or an action adventure. As Far As The Eye is fairly unique however in that it crafts a beautiful and intriguing setting around gathering resources in this turn-based strategy affair. 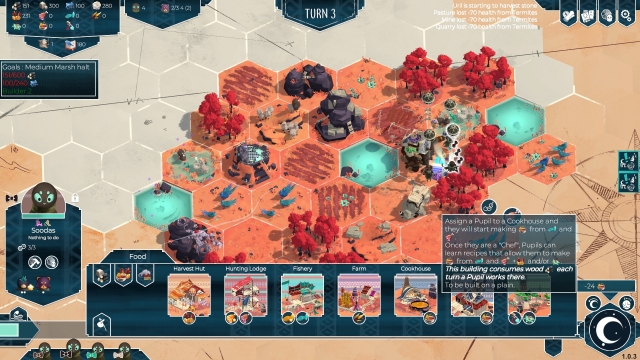 As Far As The Eye (officially abbreviated as A FATE) is a roguelite strategy game set across a series of hex-based maps. Each playthrough is procedurally generated with everything that can be jumbled up being so; from map layouts, the overall path, events that occur and the group of poncho wearing pupils you start with and their quirks. It’s designed to be replayable.

Initially you are greeted with an overview of your journey which contains a number of maps or halts as the game calls them. Each halt requires you to gather a certain amount of resources and or skills to progress to the next and looking ahead to see what you’ll need later on is important.

Once you start, you need to place your caravan which acts as your base of operations. You can then designate tasks to your pupils as you work to get the resources to keep the tribe alive. Basic resources like wood and pepkins (an adorably named fruit) can be gathered without any buildings but you are immediately under pressure to build facilities like quarries, sawmills and more to become more efficient. 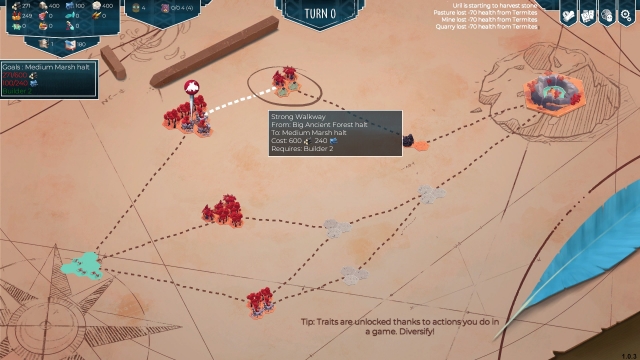 This pressure takes the form of a time limit. You see, the world is flooding behind you so you need to move on before the water catches up to you. Complicating this further is a series of vagaries that occur throughout your time, these can consist of something as simple as lakes flooding causing tiles next to them to take damage or perhaps creating a fog over the map making navigation take longer.

This makes your early decisions matter, do you focus on making more expensive mobile buildings that you can take with you early? Do you prioritise specialising your pupils so they eat less and gather more or spread out their skills in case you lose one due to bad events.

Planning is the key and the game becomes focused on optimising your time and tribe based on what you find on each halt. As you uncover each halt you’ll also discover a variety of ruins and events. These can give you something beneficial, a bonus to experience when stationed at a building for example or something negative, like losing a pupil due to them wandering through a mirror as an (I can only presume) evil doppelganger summons them through. 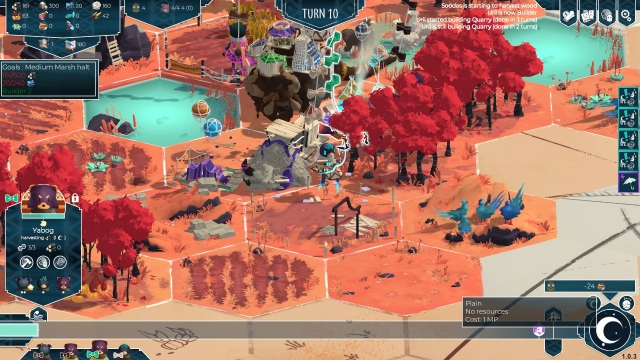 As mentioned, you can build facilities like quarries, sawmills, harvesting huts and more that act as ways to specialise your pupils. When you assign a pupil to gather resources they’ll gain experience up to an initial cap where they’ll then need to use a facility to be able to specialise, this is visualised in the trades wheel where each resource collection “trade” can be seen splitting into two specialisations.

Each path here has unique benefits but all include some form of reduction in food requirements as well as enhancing the yield from their profession. Some like Cooking and Building reward you with more recipes and buildings. Focussing a pupil on specific tasks also just makes them perform them more quickly and efficiently. On top of the choices related to general resource gathering and planning, each pupil has unique traits that can either be a pain (like requiring 50% more food per turn) or a boon (like making gathering require 1 less turn). All of this leads to a lot of interesting decision making as you juggle in your head who should be doing what, what should be your priority, should you gather as many resources to take with you to the next halt or leave as soon as you can.

Moving to the next halt allows you to take some resources with you, which presents you with a screen showing your caravan space along with any extra you may have from found pack animals and you fill the space with resources. Each resource is a different size and shape so you’ll need to make tradeoffs but all resources are important.

I haven’t even mentioned the adorable art style with the poncho wearing pupils changing into different animal forms based on the task they are performing or how the general feel of the game is sad but optimistic. The world is clearly in a bad state, with floods and disaster at every turn but your little tribe of cute pupils are ever optimistic and happy performing their tasks. It’s hopeful and that has really resonated with me in the time I’ve played As Far As The Eye.

This game is a little gem from out of nowhere, it’s a surprisingly deep, constantly engaging experience with a great setting and is a lot of fun. If you enjoy the idea of resource optimisation or the concept of an almost puzzle-game like roguelite then As Far As The Eye is probably the game you are looking for.

As Far As The Eye (Reviewed on Windows)

As Far As The Eye Out Now

As Far As The Eye