Here it is another Assassin’s Creed game, this time around we go to the shores of Greece in 431 BCE for Assassin's Creed Odyssey. We start off by choosing a character to play as throughout the whole game. Choose from either Alexios or Kassandra. I chose Alexios, as his name is close to my youngest daughter Alexis and, well, seeing as Assassin’s Creed has been run by men, apart from Syndicate and Liberation, I chose to stick with a male role. This is only the first choice you have to make, as there are a lot of them.

What I liked at the very start was choosing the gameplay mode, where you can choose either Guided Mode or Exploration Mode. Guided Mode is more along the lines of a traditional “game” experience where markers are displayed at all times and quest objectives are given to you automatically. However, Exploration Mode is a newer (for this series) approach to the way the game should be played, the user must investigate the world to uncover targets and quest objectives. I decided to go for Exploration, as it explained that it’s the way Assassin’s Creed Odyssey is meant to be experienced. 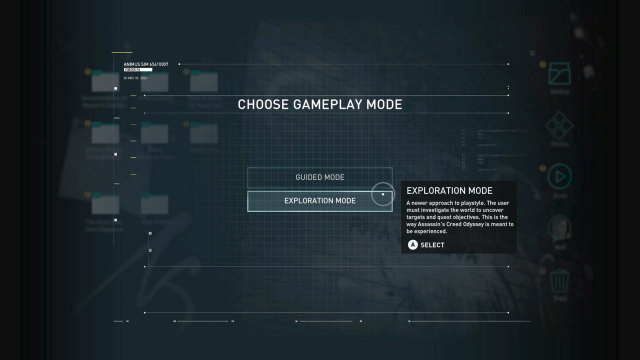 Since even the game box makes a big deal out of choosing your fate and how the game will end, they have also now added a new feature where you choose what to say to people. Whether it be flirting, threatening them or just generally speaking, at first I was unsure about it because I have never come across this in an Assassin’s game before, but I warmed up to it in the end. 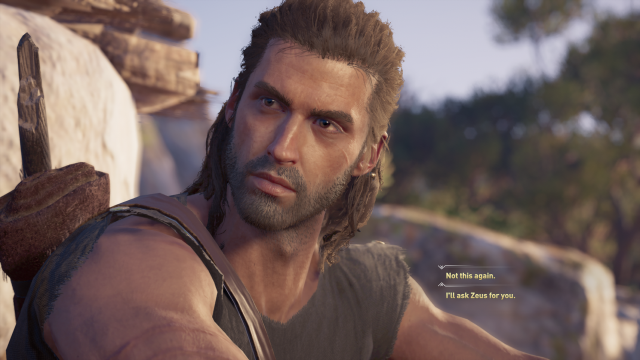 There are a lot that of similarities to Assassin’s Creed Origins, like the compass with question marks and distance to travel along the top, and your pet eagle will come and land on your character when stood still for a bit. Oh yeah, you have a pet eagle, which you use to highlight the enemies ahead. The biggest change from Origins is that you see a lot of greenery and water, instead of playing around in the desert.

Speaking of past games, do you remember Assassin's Creed IV: Black Flag where you had your own ship and had to upgrade it and sail places? Well, you can do that in Odyssey. Yes you get to be a captain of your own ship again and fight other vessels in ship-to-ship combat. It does get a little hard to upgrade your ship as you use the same materials for your weapons as well, so you have to spend wisely but the ship moves a lot better, and fighting other ships is easier than it was in Black Flag. 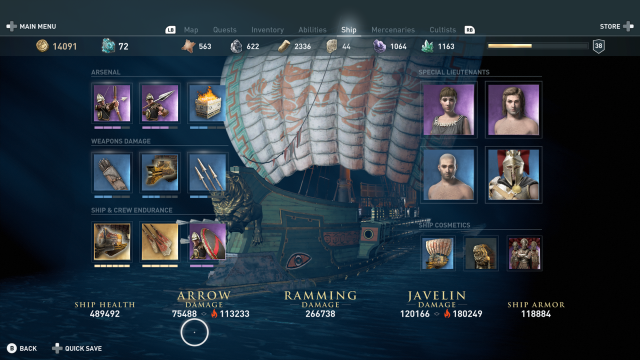 You do also come across bounty hunters like in Origins, but this time there are a lot more of them. Luckily you can pay the bounty off from the map depending on how many you have after you. When you look on the map their symbols are white until you make them angry, where they turn red which means they are actively looking for you. Kinda like the Grand Theft Auto wanted levels.

Looking around the map you’ll see there are over 30 islands, all with enemies at various levels. Undiscovered areas are shown by question marks, and you can also find things like blacksmiths, viewpoints and Conquest Battles when you uncover them. Now, Conquest Battles are interesting as you can attack or defend for either Athens or Sparta - attacking gets better rewards and they are big long battles with lots of people fighting loads of other people either on land or at sea. 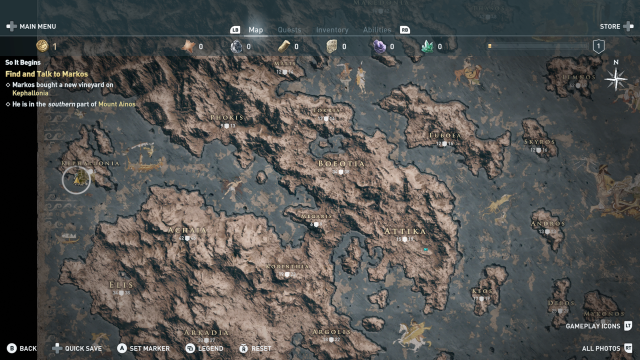 To help with Conquest Battles there is a Nation Power where killing the nation leader helps lower it. Before you can do that, you first have to kill soldiers, burn war supplies and pillage nation treasures.

What might be helpful, but can be a little annoying is crafting supplies. Looting plants you come across to give you wood, going into caves and around the areas you explore there is iron too, and killing animals gives you leather, but you can also buy them from any blacksmith. These will help with upgrading your weapons/armour and also your ship, and they can be useful for engraving your weapons to add power-ups. Now I haven’t really come across this yet but while I have been playing for 50 hours you can unlock engravings by killing 30 mercenaries, 15 leaders or by getting to a certain level, I have so far been unlocking them but not assigning them to my weapons.

If you are looking for extra side missions to do, you can take yourself to a city where you will see a statue with a board on it and you can go to see who will pay you Drachmae for help. It is definitely one way to get extra Drachmae to help towards upgrading gear or your ship.

Another thing that is like Origins is while riding a horse you can set it to automatically follow the road or go to markers. There are also some new horses - I got excited to see a unicorn at the blacksmith so I brought it and OMG when you ride it, it makes a rainbow coloured trail! 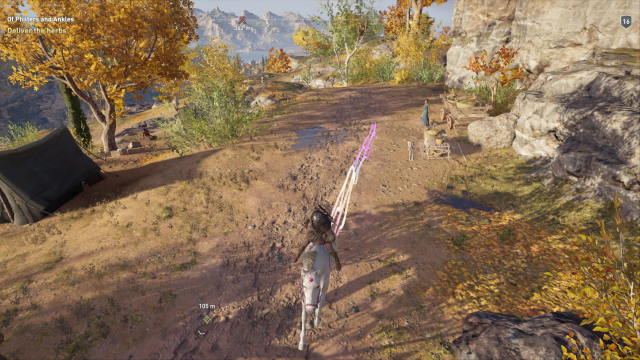 As I played along it looked great as the graphics were very smooth running. Until you start to run around or ride a horse, where it starts having a random one second freeze… Also I experienced more than a few 5-10 second freezes when fighting. Now this didn’t happen before the updates started coming out.

One time my controller died, so I had to put it on charge and grab the husband’s controller to use - and it closed the game on me. Didn't warn me that there was an update or anything, which I wasn't happy about due to the fact there are no checkpoints. The game saves often, but you have to save it sometimes yourself just so when you die it doesn’t send you all the way up the other end of the map.

Before the second update of the game there was a glitch when you bring out the torch it showed that it was lit in a cave but yet there was no flame. Thankfully this has now been patched and fixed the issue.

While I played Assassin's Creed Odyssey for over 100+ hours, at no point did it mention how you can pass the time by making day into night or vice versa like you could in Origins. It helps a lot when you need to do a mission and want to be a little stealthy while guards slept, and you can do it, but the game just never tells you. Another issue is, from time to time when I would fast travel from one area to another using the viewpoint, the loading took quite a long time. Some of the loading times have improved with updates, but at other points it feels as though it has to take a while to load.

More a niggle than an issue, I find it weird that while wearing the helmet/hood as Alexios and going into a cutscene it disappears. Not into his hand or anything but completely disappears and then when the cutscene has finished it reappears on his head again.

Odyssey honestly feels very repetitive, with going to places and clearing camps and missions. Go here, kill this person, and report back to the person who assigned the mission. And when you go to the mission board that I spoke about earlier, it gives you more missions that are almost the same as the ones you did hours ago, so it is never ending.

Finally reaching the end of the game, or what I thought was the end (there are no credits), I had reached the max level that you can get to. I wish they had extended that due to the fact that I had not even completed the game fully by the time I got to level 50 and I was still getting good amounts of experience points that I felt were being wasted. In Origins it was up to level 50 and then they extended it when they brought out each DLC, but with Odyssey being bigger than Origins I believe they should have let us level up to maybe 70 or higher.

Now to start Assassin's Creed Odyssey again to see what it is like to be Kassandra. 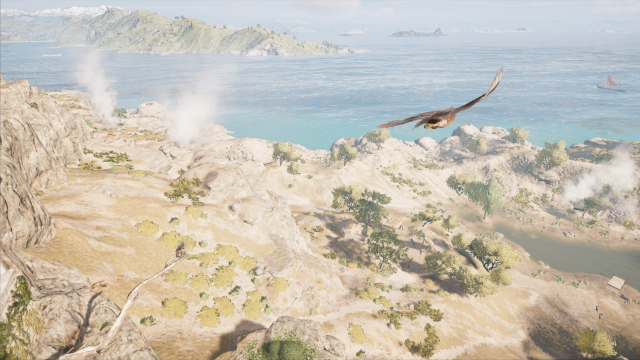 It was yet another good game from Ubisoft and I always like to be an Assassin again. I look forward to seeing if the next Assassin’s Creed game will be just as big as Odyssey, although not too big please.