As a series, Assassin’s Creed is hugely divisive. Like the Templars and Assassins themselves, there are two sides locked in constant battle regarding the annual series. While last year’s iteration, Assassin's Creed Unity was somewhat of a disappointment, falling back into the hands of the Templars, Assassin's Creed: Syndicate, has to some extent righted the wrongs of its French Revolutionary brother. It ditches multiplayer altogether, removes unnecessary clutter and, from my experience, there were no cases of floating eyeballs and hair. All of this counts towards not just the best Assassin’s Creed experiences on current-gen consoles, but one of the most enjoyable additions to the series altogether. 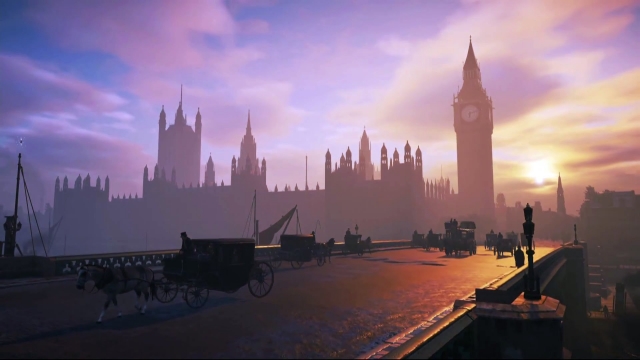 Assassin's Creed: Syndicate plunges you into Victorian London, at the height of the Industrial Revolution, and the pinnacle of societal divides as the rich exploited the poor, the sick and the young. Jacob and Evie Frye, two young assassins from the outskirts of the capital vow to make a difference by bringing down Crawford Starrick, a man with his fingers in many industrial pies and who happens to be a Templar Grand Master, pulling the strings with the help of an elusive Piece of Eden. It’s the standard Assassin’s Creed narrative and the nine sequences that form the game involve the Frye twins, piece-by-piece, taking out various accomplices of Starrick. Of course, as has become expected with this series, there is a modern-day tale that you keep coming back to, though it is only for brief moments at a time and doesn't interject from the running, jumping and killing too much, but feels forced and unnecessary at times. 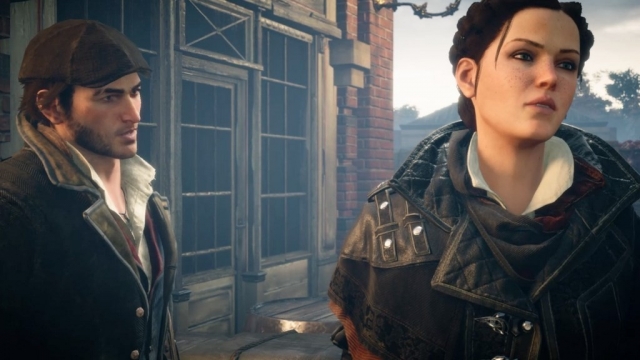 As protagonists go, Jacob and Evie are among the most likeable in the series and the game is at it’s best when the two are bickering like siblings do. They are wonderfully acted and are removed from the often rather woody and one dimensional characters of past games like Conor and Arno. Ultimately, Jacob and Evie want the same thing, but they want to do it differently. Jacob is the ‘all guns blazing’ type who wants to head straight to the top of the pyramid and dethrone the Grand Master by any means. His sister on the other hand, is much more by the book and level headed; the difference is reflected in the initial character specific missions and stats, but in terms of gameplay there is no real difference between the two.

Jacob’s tutorial has you derailing a train while Evie’s sees her stealing a key and looking for a hidden laboratory, but once the city of London opens up for you to explore at your own will, the path that Ubisoft have laid for each character can be forgotten entirely. The game allows you to switch between both twins on the fly and attempt missions with either (though there are a few exceptions during each sequence) but essentially, you can play however you want with whoever you want. XP is earned simultaneously between characters, saving you from unnecessary grinding, but the upgrades are the same for the most part with the odd Jacob or Evie exception. Once fully upgraded though, either twin is the lethal assassin you will be familiar with and is ideal for either a stealth or kamikaze playing style. It's a great foundation for a mechanic that the series has been screaming out for, paving the different class types in future additions. 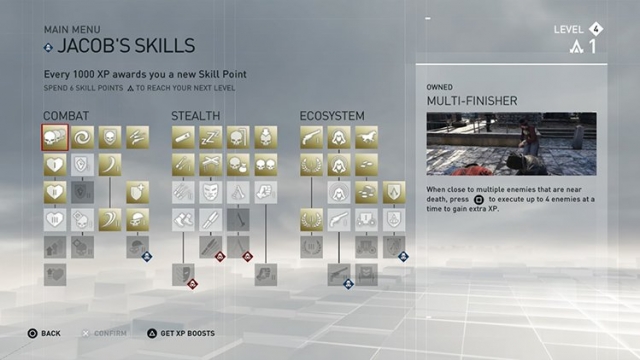 Victorian London itself is a million miles away from the Renaissance decor of 16th century Italy, revolutionary Paris or the slums of the crusade struck Middle East, but it stands proud as yet another dense, varied and complex world to traverse. From the top of Big Ben, to the terraced houses of Lambeth, the world is full of paths to explore, buildings to scale and people to stab in the face. Atop a docked boat on the densely packed Thames you can see the very diversity of society, one side is the billowing smoke of factory upon factory, the other: Buckingham Palace,  Saint Paul's Cathedral and the bloated corner of upper class London. It’s a yet another huge map where fast travelling (unlocking synchronization points) or horse and cart will be your friend, but it’s worth exploring and taking in the beauty of a relatively ugly period of time by traversing the rooftops.

Ubisoft have made scaling buildings and jumping from roof-to-roof much easier and quicker this time around. The classic single button free-running up, and the recent free-running down return as you would expect, and despite some minor improvements you’ll still find yourself hitting a number of hurdles and find yourself perched on top of things you wanted to jump over. Away from the climbing issues though, Assassin's Creed: Syndicate introduces a grappling hook, courtesy of inventor Alexander Graham Bell, which makes life in Victorian London a dream. Getting to the top of buildings happens in a matter of seconds and you can zip across large roads without ever needing to touch the ground, feeling a lot like the Batman Arkham series. It’s certainly the finest mechanic to be introduced into the series in a long time and works, from my experience much smoother and easier than the more manual climbing method. 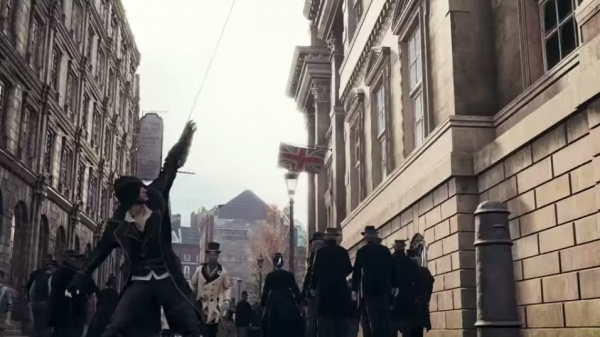 Alexander Graham Bell isn’t the only notable historical figure you’ll find roaming the streets of London either, you’ll stumble across the likes of Dickens, Darwin and Karl Marx, all of whom have their own side missions available for you. These aren’t just ways of stretching out the play time though, the more missions you do the more loyal these associates will become, gifting you with weapons, maps or crafting recipes. The same can be said for the fictional associates, whose missions help you liberate parts of the map. The Ubisoft formula of slowly clearing the fog, or red zones of a map once again returns, and in this instance, it’s fair to say Ubisoft have out ‘Ubisofted’ themselves with this. In each region of London, the Templars have a handful of outposts, bases, child labour factories and wanted felons that the assassin’s want cleared, and all offer a different method of playing. Freeing child workers requires the ultimate stealth approach, catching felons is best when you’ve cleared a path to walk through, and taking down bases is easily done using the all guns blazing method. All feel different and never stagnate, with the game offering bonuses when you achieve certain objectives, much like the main stories missions. 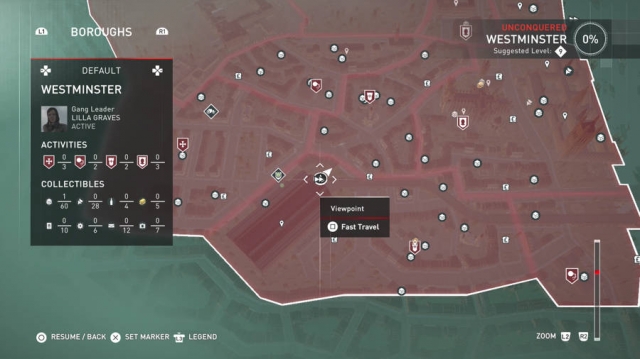 For these main story missions, it is more of the same amalgamation of tailing Templars, stealing keys and saving prisoners which is disappointing, though this is injected with some life at the right times. Dramatic train or horse and cart chases give Syndicate a more cinematic experience than usual and jumping from rooftop-to-rooftop at high speeds is a welcome change to the stealth approach feeling like a nice replacement of naval battles. Each sequence has you having to assassinate a member of Starrick’s team, and this is when the game feels most refined. There are multiple entrances to buildings, different NPCs to approach and offer help, and my favourite, the unique assassinations; kills which involve you completing specific objectives and reward you with a cinematic kill, a million miles from the simple hidden blade through the skull. The open nature of the mission means that no two playthroughs will be the same, rewarding players differently for their approach and its a feature that has been a long time coming for the series.

Assassin's Creed: Syndicate is a hugely positive return to the series that last year burnt a lot of fans. While there are still minor textures drops and odd animations as a whole it’s an enjoyable experience, but one that doesn’t feel like anything new. With the two playable characters, Ubisoft have set the standard for future iterations of the game, and have lots of positives to take into the future. While the story is still forgettable, is doesn't take away from a thoroughly enjoyable Assassin’s Creed experience.

Head and shoulders above last year’s version, Syndicate has refined the Assassin’s Creed experience, but essentially it’s another familiar entry to the series with several polished elements.

You Know You're Addicted to Assassin's Creed When...

Oh wait I already got it free with my new GPU. Well, a few hours won't hurt...

You can visit the Queen's house, and the Prime Minister's House, and Alexander Graham Bell's house... and Dickens, but he's always in the boozer getting pissed up

I enjoyed the story line and I think out of all games now I truely like the twins.

and that is coming from someone that is a true assassin fan.