The Japanese indie scene has always been a market lacking the tools to propel titles to proper stardom. For every Downwell there are a thousand La-Mulana’s and, niche or otherwise, they’re left waiting for the right player to bring it onto a forum for the best spotlight to shine. Thankfully, publishers like Playism and Dear Villagers are making sure a lot of these games get the right exposure, like today’s title, Astria Ascending.

This is the sophomore JRPG release from Artisan Studios, which got its start with the first Western-developed Hyperdimension Neptunia title, Super Neptunia RPG. From there, they expanded into Japan and developed Astria Ascending with some major talent, including Kazushige Nojima, scenario writer on several Final Fantasy and Kingdom Hearts titles. Now that’s a pedigree right there.

Astria Ascending follows the story of Ulan and her seven co-workers, who have been chosen at random to be a powerful group of demi-gods. Tasked with protecting the lands and its varied species, it’s a job with temporary benefits, as after three years of working together you pass on into the sweet unknown via “Ascension”. What follows is the last three months of their tenure, the 333rd group of soldiers to follow this cycle of death and rebirth. 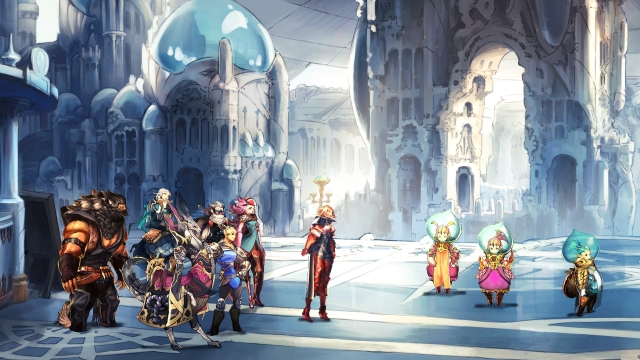 With a plot like this, you would think it’s safe to assume that the word “overpowered” is a factor in gameplay, but you’d be incorrect. It’s hard to frame a story around the last moments of this squad of demi-gods in their final battle of many, but Astria Ascending tries by implying the squad hasn’t tried at all. If anything, they’ve been watching Law & Order and eating Danish pastries for the past 33 months.

In the beginning you’re fairly meek, lacking in the fields you’d expect, even for a tutorial. Your eight characters have their roles, whether it’s physical attacks, magic attacks, support, or a balance of all three. While there is a focus on making sure all eight characters cover the factors that come with JRPG turf, it’s fairly weak and inaccurate, especially in how you approach battles.

It’s quite clear that Astria Ascending is opting for an old-school JRPG approach to its gameplay, in which a lot of its battle mechanics are aggressively streamlined. While the battlefield is grid-based, the implications for tactical advantage are gone. If you’re expecting factors like attacks having range, a turn timeline to strategise, or detailed enemy information, you won’t find it here. 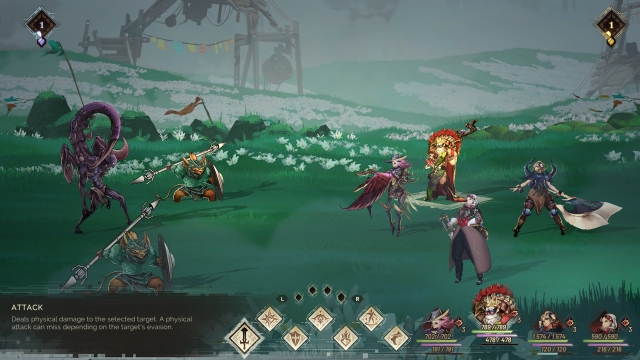 Some of these mechanics can be found in the skill trees, or at least one of the four you can implement for each character. It’s an ambitious attempt at furthering dedicated roles instead of balancing, and it’s fun to try and figure out who should do what. Whether it’s allowing someone to tank hits with taunting and a high DEF stat, a continuous stream of healing, or an overload of elemental attacks, it’s neat to see them snugly fit into it.

The problems arise when it comes to how transparent Astria Ascending wants to be. The game boasts a gorgeous hand-drawn art style and likes to pair it with minimal UI design, which isn’t executed as well as you’d expect. Whether it’s health bars, status effects, item drops, pickups, objectives 一 all of it is reduced to small icons or tiny text stuck in the corners, so as to not disrupt the vistas painted with blood, sweat, and tears.

The UI is a horrific beast one has to tame, especially when it comes to navigation. Astria Ascending has a lot of platforming levels, not wanting to genre-fuse explicitly 一 rather, it prefers to have distinct paths of gameplay, whether it’s platforming, basic JRPG combat, or even shoot ‘em up sections, all of which are fairly basic in a bittersweet sort of sense. 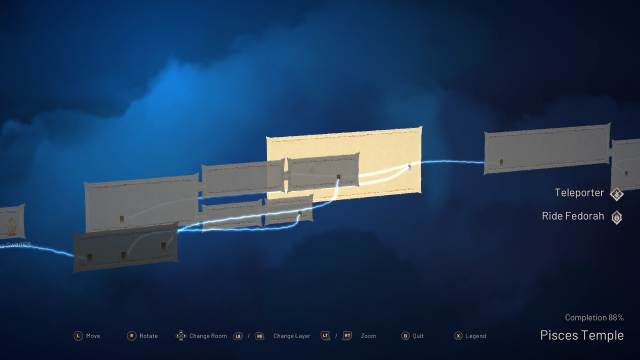 The platforming side of this awkward scalene triangle composed of genres is definitely the one with the shortest side. While levels in various chapters can look different from one another, it’s when you’re trying to get from point A to point B that brings the pace down to a crushing crawl. Attempting to find doorways baked into the environment with a faint light, all while also trying to understand one of the worst mapping systems put into a game in recent memory.

While not excessively offensive in how it presents these genres, Astria Ascending’s biggest flaw is that the innovation isn’t there, despite an attitude that would state otherwise. Its most unique feature is an accessibility option cooked into the battle system, dubbed “Focus Points”. For every elemental attack you perform on the enemy which is a weakness, you are given a couple of these to spruce up your next attack’s damage.

It’s a neat reward that recognizes foresight in a player, allowing you to add bite to seemingly weaker attacks, but this is still an accessibility option 一 an option rendered pointless by another option in the menus that can drastically reduce health for enemy fights. With the flick of a switch before battles, you can choose to have either instant victories or a tactical challenge, the results of which always offer the same rewards. 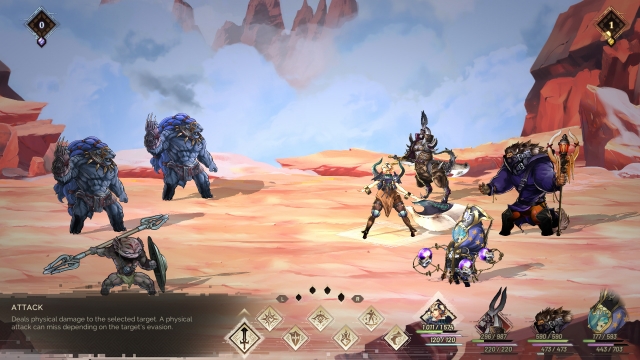 All that leaves is the story, which lacks punch despite having such an unwavering subject. The idea that these heroes only have three months left before everything they know is ripped away from them should create conflict and fear, but it barely seems to register to them. In fact, a lot of the conflict is pre-established from separate characters’ traits, like how the child mage Eko constantly feels belittled due to his age and unimposing nature.

Since the chapters want to focus on the lands these heroes hail from instead, a lot of their struggles are thrown to the wayside to talk about inter-racial relationships, or the lack of trust these lands hold in such an irreverent force of people. It’s childish commentary, grossly transplanted from real-world culture issues that fail to make a single dent in either side of the world, in real life or in a game.

Astria Ascending is a difficult game to consider, not because of challenge, or navigation, or even tough subjects, but because of uncertainty. The uncertainty that what Artisan Studios have designed is meaningful, the uncertainty that the world has over its own heroes, and the uncertainty it has in the player to fully understand the tricky subjects Artisan have ineptly transferred to a video game. There is no harmony or peace here; Just a cycle that’s about to break, and you’re responsible for ground zero.

While Astria Ascending’s gorgeous world has a basic gameplay loop that can satisfy for a while, it lacks the knowledge to challenge minds or the spirit further. With no strategy in the later battles, a story moving too quickly to be poignant, and severely unlikeable stereotypes as characters, the lessons are forced and the result is grating.