If there is one thing that Autocraft has taught me it is this: if it doesn't work, strap more rockets to it.

The game, developed by Alientrap and released on Steam through Early Access, can be described as an eclectic mixture of Minecraft, Lego and Super Mario Galaxy. The player takes the role of a nondescript astronaut, piloting his or her way through a galaxy of asteroid-like debris, each with its own biome and landscape. Upon landing on each rock the player must construct a vehicle to reach a pulsating Alien artefact – by any means necessary.

Autocraft’s visuals are deceptively beautiful. Blocky and voxel-like though they may seem, the developers have imbued each extraterrestrial landscape you traverse with striking colours and shades. One minute you might be driving a buggy over the red sands of a dune and the next be floating a balloon-powered zeppelin over a frozen asteroid. All the while the game looks beautiful in motion. The unique art style is definitely a big plus for this plucky indie set within an already-bloated genre.

Although the game features a sandbox mode (more on that later) it’s a puzzler at heart. At the start of each stage you are given a certain number of building materials and tasked with creating a working vehicle. Following the construction stage you then have to pilot your creation to the end of the level. No specific guidelines are given and in many ways what you create is up to your imagination. 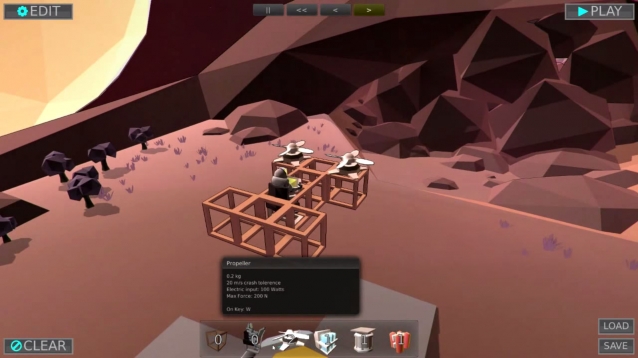 The controls for each of your creations are simple and certain parts can even be mapped to specific keys (for times when you want a booster for up and down, for example). Building is simple and intuitive: pieces will snap to edges and corners without much need for fiddly mouse work, enabling you to create mammoth designs in little time. The ability to recreate rapidly is incredibly handy, as in most levels your first creation will almost never work.

This is where Autocraft shines: the level of variety available to you from such a small selection of parts (in the beginning of the game anyway) is mind-boggling. I’ve created dune buggies, fixed-wing aircraft, rocket-boosted hot air balloons and more. There can be a lot of trial and error early on, however, especially as the game doesn’t really give you specifics on how to reach your goal. This wasn’t as frustrating as it might seem, though, as I found myself grinning like an idiot when the top-heavy rocket ship I designed flung itself into the stratosphere as soon as I pressed “start”.

Autocraft’s soundtrack matches its setting well. As you construct, drive and (inevitably) crash, an ephemeral synth-based music will gently play in the background, really nailing the tranquil setting of outer space. Thats not to say it doesn't have it’s crescendos, though, which can crash just as you attempt that final jump or spin around obstacles and debris. 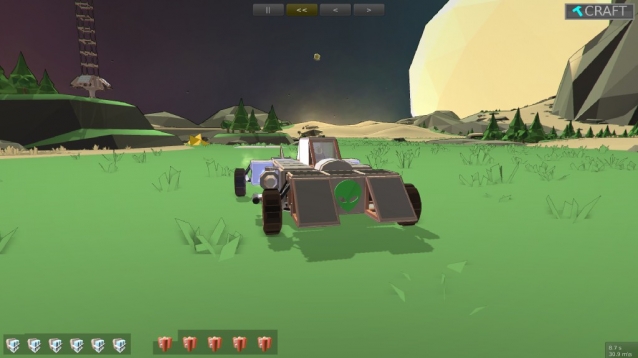 Over time in the main game you will accrue different types of components to build vehicles, either by progressing through the game’s 37 levels or by collecting bonus stars along the way. When you unlock a new piece it will also be unlocked in the game’s sandbox mode. Sandbox allows you to pick from any level and then create to your heart’s desire. There is even the option to download and use other players’ creations.

As could perhaps be expected from a game in its early stages, Autocraft does have some bugs. Occasionally my vehicles would glitch through the landscape or launch themselves unexpectedly through the air. These events were minor and few and far between, and were really no worse than times when I had “accidentally” driven off of a cliff or into an abyss. The game’s 37 levels can be completed fairly easily if you attack the game at pace and sometimes one type of vehicle style will easily solve two to three puzzles in a row. Hopefully the game will be seeing more content on this front in the future.

Autocraft is a fluid, gorgeous and extremely fun game to play. The impressive visuals, sound design and puzzles help to create a game that will suck you in and leave you wanting more. Unfortunately its biggest upside is also a flaw; there’s not enough to do, meaning  With further content updates and perhaps some more intricate stages,  could prove to be a shining gem amongst the bloated sandbox genre.

Autocraft is a fluid, gorgeous and extremely fun game to play. The impressive visuals, sound design and puzzles help to create a game that will suck you in and leave you wanting more. However, many will finish its well-thought out challenge mode and think “oh, what now?”