I am going to say this before I get into the proper review; the game is clearly meant for casual cooperative gameplay, possibly on a console or at the very least with a controller.

My experiences with this game have been mixed, whilst I strongly believe that the game plays into its strengths and excels at what it attempts to be, which is a casual cooperative sidescroller, something it does very well in fact with clearly lovingly made graphics that just help you to relax and unwind a bit. I found the game was very casual with only a few button commands, one was to attack (or in the case of “staff” to teleport your enemies) and the other was some form of block or dodge. There was nothing fancy or overly complicated, each of the features always played sort of part into a puzzle that would no doubt appear in the level which were all cleverly thought out and balanced thinking with instinct.

I never once stalled on an issue or got stuck and was able to constantly progress but I always felt challenged after the 5th level, I felt like I had to make split second decisions increasingly frequently and almost predict which lanes would be free and which wouldn’t. Moving my little heroes up and down the lanes in an effort to predict where the next puzzle or obstacle would be. 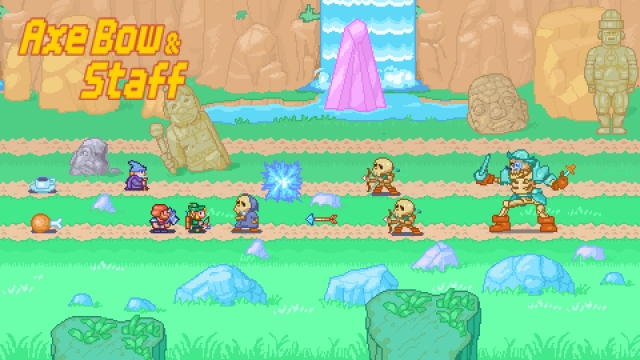 This is where I think the game struggles, with the inability to manage multiple people at the same time it is often hard completing puzzles in the way you want to do it and often and certainly in my case. I eventually stopped playing as Axe and Bow as they were the ones that made all the kills and did all the fancy jumping over arrows and smashing away bushes whilst I sat back and completed the puzzles as staff. Often having to teleport a goblin or two on top of a button in order to progress or moving a particularly troublesome archer onto a set of spikes so he would stop harming the others.

Without other players it felt lacking, without someone to join me I felt that I was often under more stress than I should have been! I would prefer communication so whilst I personally avoided it I would suggest that anyone who picks up this game at the very least tries the online multiplayer. Who knows? Maybe it will be far more entertaining than I predicted.

There is nothing bad about this casual sidescroller but there is nothing to get overly excited about. A solid game that is worth picking up with friends or possibly on your own. I disagree with its £7 price tag however, it's worth about £5 so perhaps wait a little bit!