I said in my review of Air Conflicts: Vietnam that I was a sucker for any game based in that period of time and also stated my love for Battlefield: Vietnam. China Rising offers two maps that I would call BF: Vietnam inspired and frankly, I’m in heaven. The other two maps on offer also do a mostly good job; mixing infantry and vehicle combat perfectly for some exciting moments and great gameplay.

On top of the four new maps, we get five new weapons, ten new assignments, two new vehicles, two new gadgets and a new game mode; a substantially larger DLC on the whole than Second Assault and dare I say it, better. Dragon Pass is a spiritual successor to Dragon Valley from Battlefield 2 and is the first map to evoke the feeling of Vietnam. This map is huge, yet still only the second largest offered in this DLC. With tonnes of air and ground vehicles available, this map feels alive from the second you spawn. Never does there appear to be a let up in the action, specifically when you’re working in tandem with your squad - leading to a whole plethora of moments that you can only have in the Battlefield series. Planes fall from the sky, tanks roll over buildings like they’re nothing and helicopters taxi squads from point to point. 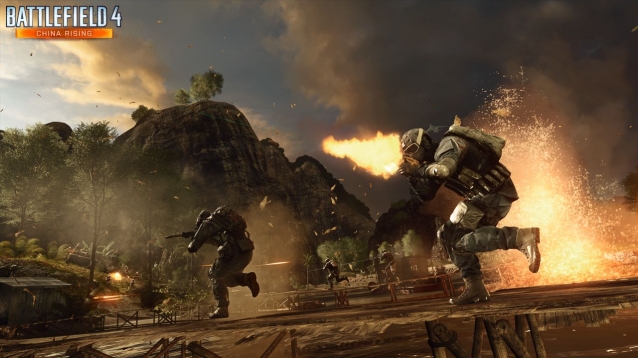 The jungle aesthetic is just wonderful. The map boasts the slightest ‘levolution’ so far, with the sky becoming overcast, slowly darkening the whole map. Following this is a slight haze of rain. This manages to change the entire feel of the map, showing off in the greatest possible way DICE’s complete control over map and aesthetic design. This genuinely threw this map to the top of my favourites to play, just for the feelings it evokes so effortlessly. The fact this is a multiplayer map in one of the most popular FPS franchises on the planet - a genre hardly known for its emotive design - makes this all the more wonderful to experience, while also showcasing a huge leap forward in what can be accomplished with map design.

In juxtaposition to that, Silk Road is an oddly balanced desert map. The middle point is very much infantry focused, yet the rest of the map is designed mainly for vehicles. I found myself being constantly killed by vehicles and feeling like the game was telling me to like it or lump it. No matter where you are on this map, if you’re not in a vehicle it’s a bit of a chore. Vehicle based maps are fine and can be great but what the Armored Kill DLC for Battlefield 3 showed off, is that unless balanced just right this can get very boring, extremely fast. This map seems to mimic that design choice, causing vehicular combat to be just a little too much of a struggle.

The Armored Kill design mentality doesn’t end there. With Altai Range we have a map that could be the brother of Alborz Mountains from BF3. This is far from a good thing. This map plays out on such a large scale it’s actually slightly ridiculous. You never feel near the action as all the players appear so spread out. The flow of this map is all off and with such a wide landscape, can feel slow and boring. I feel that this map’s aesthetic was stolen straight from the aforementioned map and there are no new ideas here. Boring design equals boring gameplay, it’s as simple as that. Lastly we come to my favourite map in the whole DLC; Guilin Peaks is everything I love about Battlefield 3 & 4 and older BF games. The aesthetic design is reminiscent of BF: Vietnam and the map plays with an emphasis on team cohesion. The mix of very light vehicle and infantry combat might be a downer to some players but with only transport vehicles available to both teams, there is no rush for the jets, attack heli, AA or tanks, instead there is just a rush to play the objectives. This map plays out so well on conquest, that I literally wish I could play it constantly.

When I first played this map, I had a moment only available in this game. My whole team moved forward capturing points. Slowly the team split in two going separate directions, capturing points. We didn’t see an enemy for the first few minutes, then it happened: trees collapsed, bits of rock and dirt went flying, bullets whizzed past my head. At the same time I saw people throwing ammo packs, med packs and anything that could possibly help their teammates stay alive, while scrambling for cover themselves. There was a sense that for every inch of ground we were gaining, we were losing squadmates. This is the first time I felt like complete strangers were working towards a common goal in this game, besides their own K/D ratio.Even after all of the ridiculous adverts EA have been pushing that shows, apparently, real life players doing increasingly stupid things - now coined as ‘Battlefield Moments’ - these are the real game changing moments. When you see years of refinement to the formula pay off in this way, it’s hugely rewarding and fulfilling to play. I would gladly go on record and say: this map is the best in the game, at the time of writing. 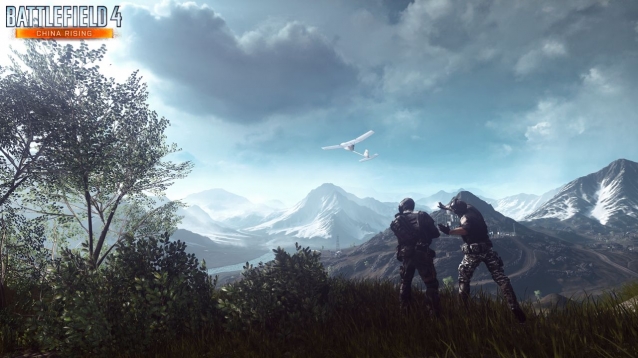 Unfortunately, DICE continues its apparent want to add boring and pointless game modes into a game which already has two of the best available in current FPS: Conquest and Rush. Air Superiority is bland.The idea that anyone wants to play Conquest in jets, is one that I still wonder how it got off the drawing board. Unless you are a really up for learning the jets, or are already amazing, avoid this like the plague.  I don’t know how to get this across to DICE. No one cares. I really wish they would stop adding these bland, boring game modes and then having the cheek the ask you to play them in order to unlock gadgets. Unlike Second Assault, the weapons in China Rising are somewhat usable and bring something new to the table. The MTAR-21 manages to be one of the best new guns along side the L85A2. Both guns sit at the top end of their category, giving more interesting options to explore with close and medium range combat, respectively. The two new gadgets added on the other hand happen to make it look like DICE has learnt absolutely nothing from its mistakes in the series’ previous release. The UCAV and the SUAV are both drones that fly around the map and either blow up or spot vehicles. Simple, no? No. The UCAV has a airburst variation - unlockable with extended use - which can one-hit most vehicles. As if this isn’t bad enough, the SUAV is flat broken; flying through enemies and killing them in a single hit, reminiscent of the MAV bug in BF3. This failure to understand prior mistakes does leave a sour taste in the mouth to anyone who played through the original issues, and frankly, is damaging to a reputation. The new bomber is another pointless addition. Get used to hit markers, because that’s all you’ll get with this new on-rails vehicle. Considering the ability to implement new vehicles is all but non-existent at DICE right now, I wonder why they even bother anymore. This is once again a reminder of the failure of the AC-130 from BF3. This DLC, as a whole, comes across as a far better slice of gameplay than Second Assault’s iterative maps and attempt to use nostalgia before any nostalgia had a chance to form. With two of the best maps in the game and a few weapons worth playing with, it adds enough to justify itself. Some very sloppy design with the gadgets that manages to make DICE look foolish and unwilling to learn. Aside from this, you should play Guilin Peaks if you enjoy the series as it’s just perfect, and play Dragon Pass if, like me, you can’t get enough of that Vietnam feeling!

This DLC, as a whole, comes across as a far better slice of gameplay than Second Assault. With two of the best maps in the game and a few weapons worth playing with, it adds more than enough to justify itself.