At Beans, there’s more than just coffee on the menu. You’re hit with a mix of live entertainment, plushy seats, and carefully poured fish-milk lattes. Beans is a coffee shop simulator that parodies other restaurant sims and the current trends in our society. While the focus is on clever puns, references, and a plethora of one-liners, Beans still provides some solid simulator gameplay with an emphasis on interior design and humour. Don’t underestimate the power of Beans, as it’s more than just any time-management game.

Beans, which is also the name of your coffee shop enterprise, is managed by millennial Ruby Acee, who unwillingly inherited the family business. She’s forced to overcome a variety of obstacles in the coffee house industry, moving from location to location in order to prove her worth. Some unknown opponent sends challenges Ruby’s way at each new spot in order to throw her off, and as a result, every coffee shop has its own personal gimmick. The college campus coffee house makes you clean up trash left behind by customers and the mall location requires the manual removal of spying drones. If you ignore these issues, it’s game over. These features don’t do much for gameplay quality but definitely keep your attention rooted since you can’t walk away and let your restaurant get overrun. 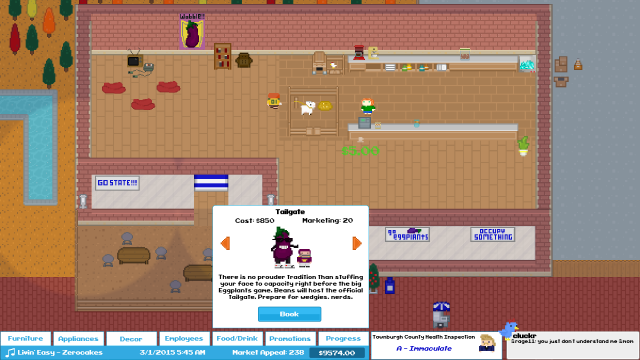 Gameplay itself is extremely simple, as the real substance of Beans lies in its jokes. Really, all you have to do is purchase new appliances, place seating and decor, hire employees, and watch the money roll in. There honestly isn’t much to do in Beans, hence the trash collecting bit. Even though gameplay definitely gets stale after awhile, I felt that just observing your coffee shop run seamlessly after building it up is quite rewarding. I can understand how some players will get bored and throw Beans in the pile of random indies for this reason, but I personally enjoyed the sim’s style. Just know it’s more of an interactive screensaver than a fast-paced strategy game.

If you’re not a big fan of witty jokes, you probably aren’t going to find much fun in Beans. Everything from recipe ingredients to customer comments are going to have some level of funny in them. Players are meant to read all the item descriptions and other jokes while they establish each coffee shop. My only complaint is that the style of humour does get old after some time, and a lot of the jokes are basically the same sort of thing. Either they make fun of today’s culture or they parody similar games. Also, for a simulator that requires a decent amount of reading, the chosen font is somewhat difficult to read. The pixelated art style in Beans is understandably simple. The game was made by a three-person team, yet still contains hundreds of individual sprites. While they aren’t works of art, I don’t think massively detailed pixel art would fit the style of Beans anyway. A bit more effort could have gone into the map layout itself though. There are quite a few glitches in placing decorations and furniture in your coffee shop and getting everything to look the way you want. Bean’s soundtrack is a nice blend of elevator music fused with chiptunes. It’s exactly what you would expect out of an 8-bit coffee shop.

Beans isn’t for everyone, as it will only appeal to those who enjoy a relaxing, satirical experience. The game isn’t really much of a “game”, in the sense that there isn’t a great deal of interactivity. I went into Beans expecting a frantic coffee shop game, and instead found a peaceful store simulation. Still, the game is just fine as a slower-paced goofy title. From start to finish, Beans shows everything that goes into running your favorite local coffee shop, and that nothing beats a freshly brewed caffeinated beverage.

I went into Beans expecting a frantic coffee shop game, and instead found a peaceful store simulation. Still, the game is just fine as a slower-paced goofy title. From start to finish, Beans shows everything that goes into running your favorite local coffee shop, and that nothing beats a freshly brewed caffeinated beverage.

Because it was his fault all along.