My daughter is dying. She needs medications from abroad, but as a state-employed landlord in a totalitarian country, I can’t afford to pay for her medical care. One of my tenants, a fat and shady sailor in apartment four, suggests I help him sell some rare tuna cans he got from his ship and tells me I can keep any profit above $3000. I agree and sell the fish to an old lady cook that lives in apartment three, who takes them to her boss. The next day, her husband confronts me: the fish was rotten and made customers sick, and the old lady can be arrested. I blame the fat sailor, and minutes later the husband barges into apartment four and fights the seaman while I watch through the keyhole. The sailor immediately starts looking for me, so I rush into my office and call the Ministry of Defence, report the sailor’s shady dealings and watch the police barge into his apartment and beat him into submission before he can hurt me. I’ve bent the law, abused my power, and am almost out of money -- I live another day, but my daughter will die.

Oppression. That’s what Beholder is all about.

A brilliantly dark art style coupled with a great soundtrack and amazing game design creates one of the most innovative titles of the year. As the newly appointed landlord of a block of flats, your job is to spy into tenants’ lives and report any and all transgressions to the government. You can talk to them, hide cameras in smoke detectors, and spy through keyholes in order to profile and catch them red-handed in violation of governmental directives, reporting them to the Ministry of Defence when you want them arrested. It’s a powerful, bureaucratic way to remove anyone you or the government wants. 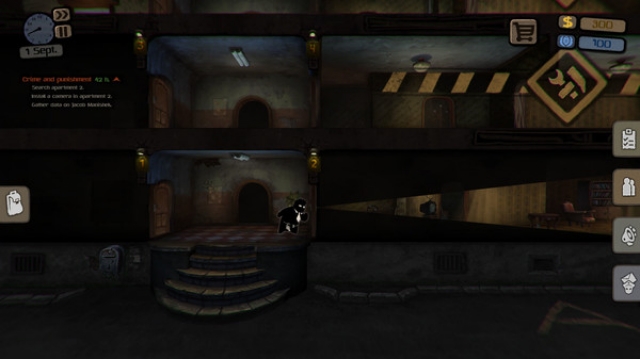 Ah, the glory of communism.

And remove them you will, several times through the course of the game. The player character is Carl, who lives in the basement apartment along with his wife and two children. A recent hire, Carl and his family witness the previous landlord being beaten and dragged to a police van the minute they step into the building -- a reminder of the oppressive tone of the game before it gives you the control. That oppression is reflected even in the sound design, where every strike of the gong at midnight is heart-stopping -- both due to the chilling sound that plays as well as the anxiety of what the new day will bring. Timed quests move inexorably forward; sometimes simple bureaucratic deadlines, sometimes personal life and death situations.

Directives trickle in constantly as the days go by, banning things ideologically flammable like philosophy and propaganda to banal and harmless as apples and jeans. When they do, you must choose if you’re going to report those who trespass against the government or risk your job, your life and that of your family’s by turning a blind eye to your tenants’ transgressions. That presents a true problem, as the amount of information you have on them makes them feel as real characters you get attached to instead of merely names in a spreadsheet, and managing your finances and security adds an extra layer of difficulty when deciding if you’re going to protect a particular person or let the police come knocking. 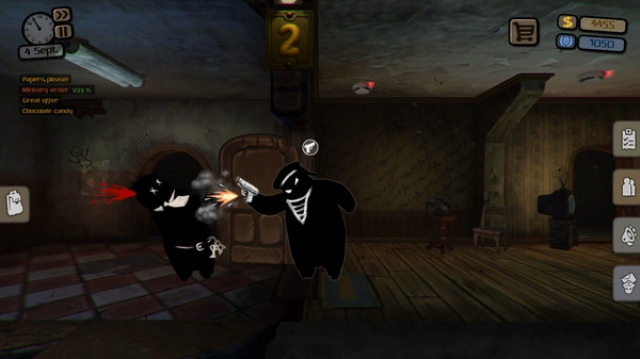 Pictured: not the police.

And when the police comes a-knocking, they come hard. A giant police officer kicks the door down with nary a warning, and proceeds to beat the suspect into submission -- no mercy or parlay is given as the civilian is bludgeoned to the ground and kicked repeatedly before being taken away to a police van, never to be seen again. It’s a dreadful affair, seeing the worst aspects of a totalitarian state being brought so clearly to life, their realities shocking even through the charming cartoony lens of Beholder’s art style.

The number of choices and threads in the game is staggering. Without spoiling anything, I’ve been shot, stabbed, shanked, exploded, and saw every member of my family die; sometimes separately, sometimes together. I also reached a couple of happy endings, and even found an easter egg that makes fun of No Man’s Sky and the Walking Dead -- really fun, tongue-in-cheek stuff. I’m honestly in awe of the amount of juggling pieces and options the game gives you, and even playing it during half a week for this review, I still don’t feel I’ve discovered everything -- the constant struggle between the options and choices, along with all the unique opportunities and variables in play make this game a true gem, giving you causes and consequences that make Bioware sleepless at night. 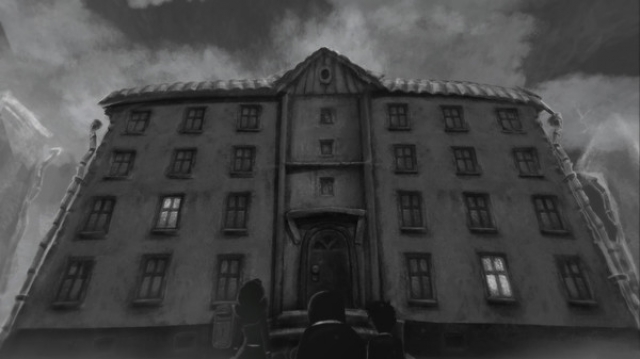 Even though in a house like this, we would be sleepless, too.

The game’s production values are admirable, and proof that indie games don’t need to have low standards. The art design is quite good, with characters drawn as black blobs with features marked by white lines and architecture sporting a bleak and washed out colour palette. The original soundtrack is remarkably good, presenting a very atmospheric vibe that is unafraid to go large and bold when the situation demands it, such as in the lovingly executed opening sequence. Similarly, graphics and sound effects follow the tone of the game, with an almost seemingly eternal rainfall frequently peppering the background as days turn into nights.

With great cartoon graphics, brilliant game design, and an amazing soundtrack, Beholder is a gem that should be experienced by everyone at least once. An oppressive, depressing, and sad gem, but a gem nonetheless.

With great cartoon graphics, brilliant game design, and an amazing soundtrack, Beholder is a gem that should be experienced by everyone.

Beauty in the DLC of Beholder This Spring

This sounds awesome, will have to add to my wishlist