The ocean is a fascinating place. A part of our world that is almost incomprehensible to many of us who share the planet with it. That lack of understanding translates over to the videogames we play. Whether focusing on the realism of the ocean or letting our imaginations loose on the big blue, everyone's take on the underwater world is different. That difference always makes it difficult to prepare yourself for the ocean. From beautiful games like ABZU to the survival savagery of Subnautica and the chaotic action of Maneater, there’s so much diversity that ocean games often fail to deliver to ocean lovers.

Beyond Blue takes a realistic and caring approach to our oceans. Through a combination of live action clips and in-game storytelling, Beyond Blue uses the art of videogames to educate the player on the sea and the creatures that inhabit it. Although often finding the gameplay tiresome and sometimes frustrating, Beyond Blue’s dedication to teaching the player about the oceans and the wonderful creatures that live there provokes a lot of self reflection. Beyond Blue is forced to balance that self-reflection of the ocean and our treatment of it with gameplay and a character narrative that feels unnecessary. For me personally, it’s a balance it gets wrong throughout the game. 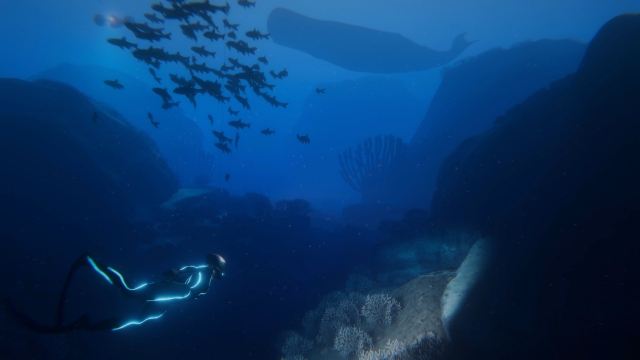 For marine life lovers, Beyond Blue is a captivating experience. The ability to swim with whales, dolphins and a host of underwater wildlife is something the game thrives in. Although the accessible parts of the ocean are relatively small, the game does a great job giving the ocean scale. There’s a natural feel to everything you see and do, whether that’s two dolphins interacting with one another or the protagonist reacting to the creatures around her. The experience feels genuine and the human to wildlife interaction we see really magnifies that feeling. It’s a gorgeous world too. Although graphically, it doesn’t blow you away, the behaviour of the whales and other animals you spend a lot of time interacting with is done with care. In a game that bases a lot of its focus on the understanding and signals of marine life, it was important that behaviour was portrayed correctly.

Unfortunately, that accuracy comes at the sacrifice of an engaging experience. The early portions of Beyond Blue entrances the player with these majestic creatures that dwarf them. That first dolphin encounter, the whale song and chasing an octopus through an underwater cave are all great moments in the game's opening. After a couple of hours of scanning whales and swimming to various beacons, you can’t help but think the game needed a second gear. It starts strong, pacing the introduction of its mechanics well. The issue with Beyond Blue is, that while it doesn’t dive in quality, it doesn’t ascend either. I’m reluctant to say E-Line Media took the easy route with the gameplay design. I believe their gameplay took a back seat so the ocean life could be centre stage - and they were spot on to make that the focus. The problem is, they give away far too much, far too quickly. The game consists of eight dives, which basically act as levels. The opening dive and the midnight dive (done whilst the ocean is dark) are the game's set pieces, but the rest of the game struggles to inspire like you’d hope it could. Beyond Blue is roughly three hours long, but as a game, you get the whole experience within the first hour. 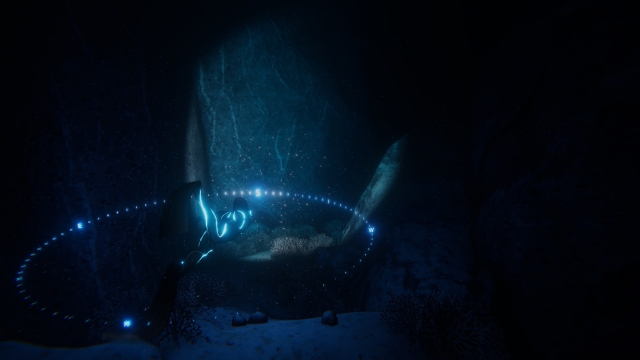 Upon completion of the game, you do get a free dive mode, where you can visit previous areas of the game you have dived in. This is probably the most enjoyable way to play Beyond Blue. Exploring at your own pace without being prodded by annoying characters. The game also comes with plenty of informative videos to unlock during your playthrough as well. These videos range from information on the ocean to various life forms that exist there. They’re a great addition to a game that does an excellent job of educating the player on our oceans. I don’t doubt that Beyond Blue could be used as an educational tool for adults and children alike. It would have benefited from more varied life in the eight dives you do, but the amount you can learn about what’s in Beyond Blue is pretty impressive. Which is where the awkward trade off of gameplay vs information comes to a head. Yes, Beyond Blue seems like a peaceful, calming game with a great soundtrack that you can get lost in, but you aren’t going to get lost for very long. Despite the gameplay aspect being peaceful, there’s a good chunk of the game that are educational videos or reading. I don’t personally think that’s an awful thing, but there will be people out there who will be disappointed with that. It’s well done, but probably not everyone’s cup of tea.

Beyond Blue’s biggest shackle is its narrative. In a game centred on relaxing gameplay to enjoy exploring our oceans, the backstory is unnecessary nonsense. It’s several characters just having disagreements or arguments. For a game that looks so calming, there always seems to be tension in the air for no reason. There’s never any payoff to these personal dramas. They’re awkward and add heavy hitting personal issue. It’s not the journey you would expect from such a game and it doesn't feel right when it plays out. Beyond Blue touches on the pollution of the ocean throughout the story, but seems inclined to make the narrative about the characters rather than the marine life it’s centred on. It’s frustrating because simply removing this narrative would have been an improvement. The voice actors do a great job however, but it’s unfortunate that everyone excluding the main protagonist is written in such an unlikeable way. Even then, the main character seems to rely heavily on the “I love whales” trope. 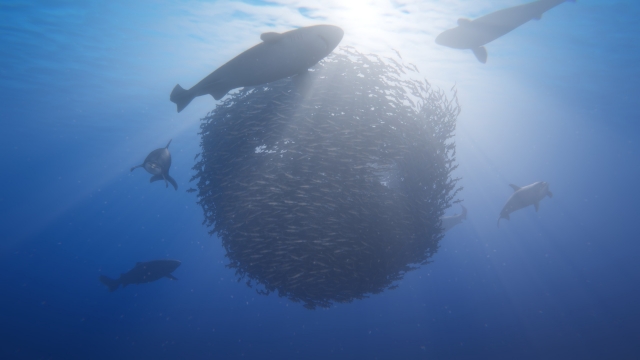 Beyond Blue had a lot of potential to be great. With more varied sea life and explorable areas, I think this would have been a fantastic experience. Not just from a gaming stand point, but from an education standpoint as well. I find myself coming out of the other end with a lot more understanding of the ocean and whales than I ever would have anticipated. On the other hand though, the game play loses you pretty quickly and the relaxed atmosphere of the game is killed by passive-aggressive characters who take away from the game's key focus - the ocean.

Beyond Blue (Reviewed on Windows)

If you want to learn more about the ocean, this would be a great experience for you. If you want a beautiful, relaxed experience about fish, Beyond Blue just about misses the mark on that, unfortunately.

12 Games of Christmas - Beyond Blue