Constants and variables. Elizabeth’s mantra that defines the BioShock universe is both a blessing and a curse. The clever narrative device has enabled Irrational Games to merge Columbia and Rapture’s intricacies remarkably well, so well in fact, that Rapture has received some constants that should have stayed on the floating city.

Booker De Witt’s story begins anew in Burial at Sea when Elizabeth shows up at his stuffy office - this is the Infinite version - asking for Booker’s help in finding Sally, a young girl gone missing from the streets of the underwater city. So up you get to walk out the door and into the hustle and bustle of the still sane Rapture citizens. 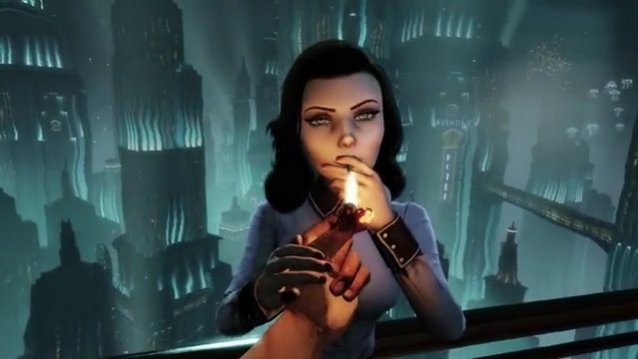 Perhaps it’s a biased opinion, or maybe Columbia was missing the same twisted charm, but Irrational’s deep-sea establishment feels like home. The atmosphere hasn’t been lost since the first game, and being able to explore a new slice of the soon-to-be dystopian city from a different perspective is a huge treat.

Aside from the change in location and narrative focus, there’s some new additions to Booker’s arsenal. The sorely missed winter blast Plasmid from the first game returns with a new name - old man winter - and is as overpowered as ever. There’s little reason to wonder why it was absent from Infinite though, as it makes combat sections a little too easy on the default difficulty.

The other new toy is the radar range, a ‘gun’ that resembles an 80s TV aerial that emits blistering heat waves, enabling you to chain kills by turning the anti-social - and imprisoned - splicers into walking bombs. Neither really adds any new tactical dimensions to combat, but they are nonetheless a welcome addition. An unwelcome return though, is the skyhook. Irrational have explained its presence away with the different realities with similarities bailout, but the truth is, its inclusion doesn’t feel natural or appropriate. Other than Elizabeth spouting a witty quip about how similar the device is, its only other purpose is to be used in a handful or areas that have ‘pnuemo tubes’ to ride on. It all feels very forced and borders on damaging the experience.

The only other contentious issue is length. At the cost of a tenner, you’re going to get three hours out of the DLC at the absolute best. We explored every non-essential path in our play-through for the extras - of which there are a generous amount - and came away with a time just under the three hour mark.

At the end of the day, whether you think Burial at Sea is worth the price depends on how big of a fan you are. If you’re not interested in the story and just want combat, you should consider purchasing Infinite’s Clash in the Clouds DLC instead. If, however, you value the potential narrative reveals that Burial at Sea offers and long for a return to Rapture hoping for a heap of fan service; we would be inclined to say that you would enjoy episode one. It’s not perfect, but Irrational’s first try is still far above average. We can only hope episode two improves on the first when it releases next year.

A satisfying return to the city that started it all. It’s a strong piece of DLC with some niggling issues that will hopefully be ironed out when the second part rolls around.