In the wake of his father’s death, David Gordon has been summoned from India to return to his ancestral family home in rural Scotland. After experiencing an unkind reception from the residents of the home upon his arrival, it is up to you, as David, to incite the investigation into his father’s death and discover the secrets of the castle. Black Mirror aims to provide a dark gothic mystery wrapped in a layer of traditional adventure gameplay patterns.

A modern revival of 2003’s The Black Mirror, which was met with mixed reception upon its launch as many critics praised its gothic atmosphere – achieved through the music, hand-drawn backgrounds and realistic animations – but were disappointed by the pixel hunting elements and unsatisfyingly linear structure it housed. Most of your time in Black Mirror will be spent similarly, as you explore the castle, find information and solve puzzles in order to yield more clues that lead towards the greater mystery. You’ll talk to other members of the Gordon family and use dialogue trees to siphon information from them. KING Art’s Black Mirror aims to resolve the issues present in the original series, namely by including more obvious prompts for when you can interact with something, and by allowing David the freedom to explore the castle as he pleases, with only a few areas locked off initially. 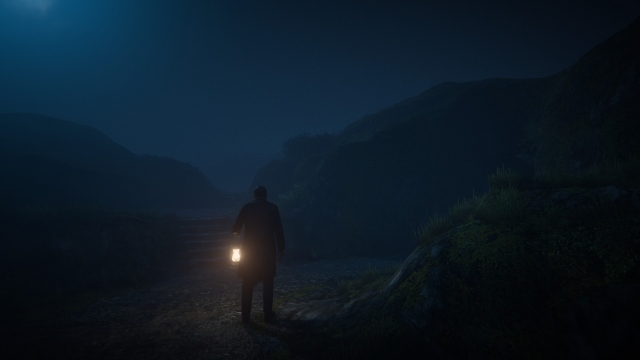 While the 2003 game achieved its moody gothic atmosphere through clever sound design and careful use of music, the revival takes a small nosedive in that regard. Benny Oschmann’s score fits the tone of Black Mirror perfectly, but the problem is in its implementation. For almost the entirety of a chapter, I experienced the same thirty-second track looping itself over and over. I must have heard it at least fifty times before it finally stopped, and it made me realise the music wasn’t made to fit around any particular scene but just played at random intervals, with very unsubtle loops.

What it lacks in sound design it makes up for in its environment. When it comes to horror mysteries – especially in adventure games – an old labyrinthine castle can remain a reliable location to keep the story contained in. Black Mirror takes full advantage of such a place. Its claustrophobic and fixed setting allows hidden passageways and dark corridors to play host to the unwelcoming nature of the grounds, as secrets are unfolded around every corner while its inhospitable residents cause conflict when the opportunity presents itself. 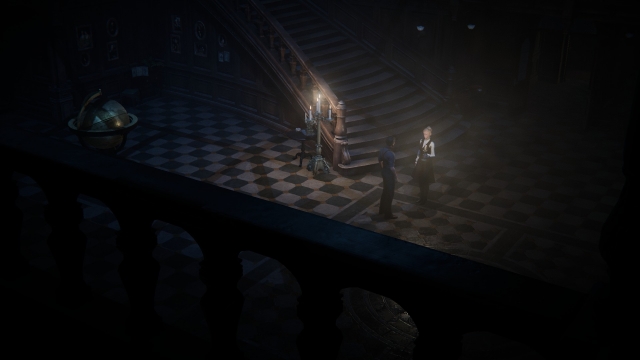 With such a perfect grasp on how to build an effective gothic environment, Black Mirror unfortunately suffers from a lot of pacing issues. There are five chapters in the game, with each one only taking about an hour to complete. The plot meanders along somewhat competently for the most part, with different twists, new characters and red herrings adding to the mystery. By the final chapter, however, things take a more unexpected turn and a lot of the brilliant setup is pushed aside in favour of some more experimental mechanics. Without providing spoilers, it’s comparable to how the final episode of Life is Strange felt like a distant cousin to the rest of the game.

From long loading times to laggy framerates, it is also fair to mention that one of Black Mirror’s biggest weaknesses on PC is in its technical aspects. There are a few areas that simply cannot run smoothly, and it can slow down to 30 or even 20 FPS. This also seems to affect how the game uses the pause menu, which acts as a way to view your inventory and diary. It can often take upwards of ten seconds to load an item in your inventory or to transition between areas, probably a result of the high-spec requirements the game asks for. 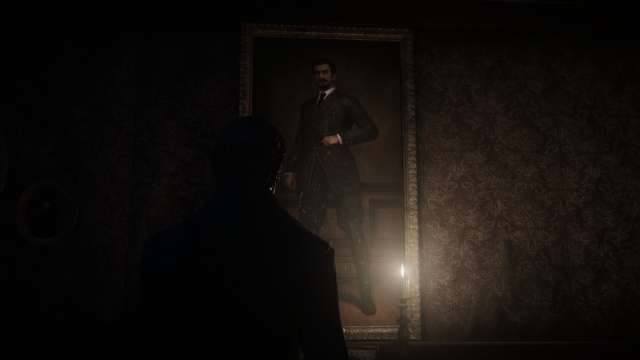 As for the puzzles themselves, there is a huge leap in both difficulty and creativity of how they were designed. Some puzzles are easy, such as arranging pieces of paper until they reveal a message or pressing buttons in a certain sequence. But some are also unfair or badly designed, with you having to fiddle around with the camera in order to solve it. For example, there is a puzzle in which you must find the right combination on a dial in order to access a box’s containments. I looked all around the room for a solution; a piece of paper with markings on, a hidden message inscribed within the environment. In the end, I realised the actual solution was found by moving the camera away from the puzzle and investigating the secret markings on the wall beside it. While it’s good that the game finally didn’t hold my hand, it felt cheap to have your puzzle rely on a camera mechanic that may or may not work effectively. Altogether, it feels as though a game so heavily rooted in puzzle mechanics could do with a few more cleverly-designed ones.

Black Mirror has potential to be a decent horror puzzle adventure, but its technical limitations and pacing issues prevents that from ever becoming apparent. Its £25 entry fee is steep for the short experience you’ll be getting, and the end product feels like a shadow of its former self.