Blazing Beaks is a roguelike twin-stick shooter that has recently made its appearance on Xbox One and Series X|S. Prior to this, the game was also available on Steam, PS4 and Nintendo Switch. This is a colourful world with armed birds blazing their way through hordes of monsters and creepy creatures. There’s a variety of different guns to use, artifacts to get and monsters to kill.

The game has a story mode where you’ll make your way through a whole host of enemies.
You have a choice to play normal or seeded. There are also daily challenges that you can take on to compete with the rest of the community for the highest score. Tournament mode is a form of head-to-head multiplayer but all of the multiplayer in this game is restricted to local play only.

You get to play as a duck, platypus, bluebird, chicken, parrot or penguin. There are also four more birdy friends to unlock as you play. Each bird uses its own unique weapon with some slight advantage or disadvantage depending on your playstyle. The perks of the playable characters make them really different and change the way you play because this game is by no means easy. It gets really hard as you progress through each section. 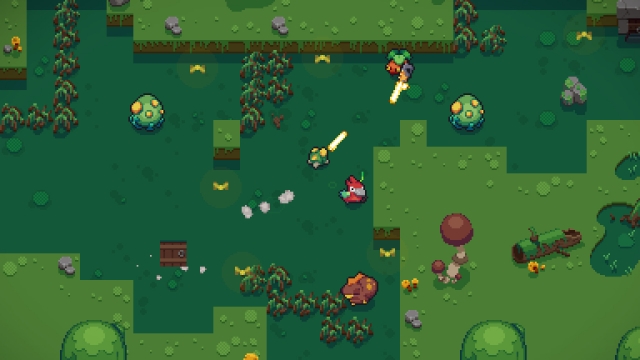 The mechanics in this game are very simple - you act as one of the bird characters, move and shoot monsters. Once you’ve cleared the level, you’ll be able to move on to the next one. After you clear the monsters of the level, a door will unlock showing that you have defeated all the necessary monsters to advance forward. Keep doing this and eventually you’ll make your way to the final boss level.

As you make your way through Blazing Beaks, there are five worlds with different art design, monsters and bosses. You will need to collect Artifacts. The Artifacts will have curses on them with different risk values; some are not too helpful, like decreasing your overall speed or collectable coins will vanish after 5-10 seconds. But then some Artifacts are more serious and deadly because they can cause instant death and a game over if you’re playing story mode. This game is about taking risks, the more risks you take, the more goodies you could get and the harder it is to manage. 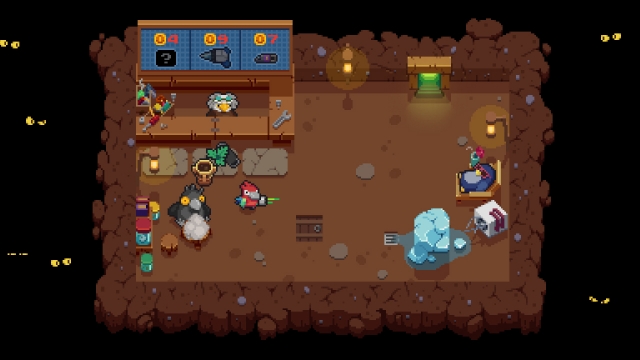 There is a door with a shining light in some levels that will allow you to go to the in-game store, where you can exchange the collected artifacts with the crow and he will give you better items and upgrades that will balance out the cursed artifacts with positive buffs. In the store, you can also buy weapons. However some have bizarre effects as they are just for jokes and can ruin your progress. Make sure to collect those coins too as you’ll be able to purchase special items from the shopkeeper.

Blazing Beaks is simple yet beautifully pixelated, it looks really nice on the Xbox Series X and the pixel art in games like this really pop when high-dynamic range is active. It's a cute but equally solid game that requires your 100% attention, otherwise it’s game over.

What I like about this game is how it made me intrigued by the characters and kept me wanting to try again to do better than the previous time. The plentiful bird characters with different play styles and perks really make it fun and interesting. The risk and reward system implemented into Blazing Beaks is what sets it apart from the other rogue-like competition and is the reason to invest in this game.

Blazing Beaks is a crazy adventure where you'll find yourself fighting monsters and searching for artifacts. There's an endless line-up of enemies for you to shoot and blast through. A cute and charming world that increases in difficulty, and as you progress through the levels you’ll be hallmarked with plenty of surprises.