Alongside the bevy of excellent new Switch games Nintendo has brought to its hybrid console thus far, the platform holder has also supplemented the burgeoning library with some titles ported over from the ill-fated Wii U. This, naturally, has brought one game to the forefront of the “which games should be ported over?” conversation: Super Mario Maker. And while Nintendo has remained characteristically tight-lipped over whether or not the oft-requested game will ever make the leap to Switch, there are alternatives for those of us who enjoy creating their own levels and sharing them with fellow players, the newest contender being BlockQuest Maker.

However, while Super Mario Maker serves to provide players with the tools to create the most devious 2D platformer levels their twisted minds can conjure up, BlockQuest Maker (BQM) strives to do the same for isometric dungeon exploration fans. The tools on offer in BQM aren’t explained especially well (in no small part due to the game’s often laughably poor English translation) but they are simple enough to wrap your head around quickly. BQM’s simple to use “link” mechanic means that the activation of any lever or button - or the defeat of any enemy - can easily be designated as the means of, say, opening a door or raising a platform. There are also useable items such as arrows, bombs, keys, boxes and a fire wand, alongside various traps and hazards; all of these combine to give creators a wealth of ways in which to truly push the puzzle-solving skills of fellow players to their limits. BQM’s ease of use is bolstered by its touch screen controls, which make knocking out even complex levels an absolute breeze, although the more traditional control methods when playing the game docked can be a tad fiddly at times. 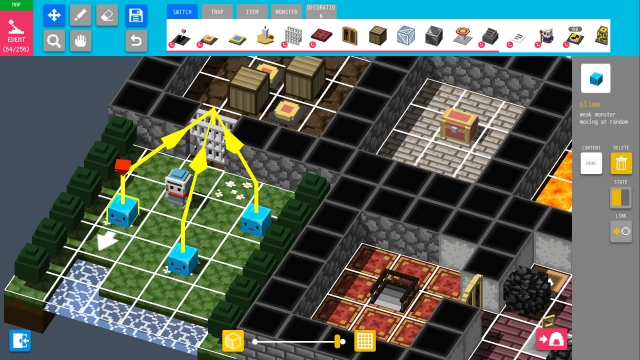 Linking objects together to create complex puzzles is a breeze in BQM.

When searching for levels to play, BQM presents players with a good suite of options. Players can search for, among others, popular levels, new creations or even those with a particularly high death rate. BQM also contains 40 or so dungeons created by the developers, ideal for getting players acquainted with the gameplay mechanics and maybe even providing a flash of inspiration in terms of what they themselves might want to make.

One way in which BQM kind of falters is in its utilisation of an economy in the form of coins. When playing through dungeons created by others, you’ll often be required to pay a small toll, with the flipside being that if someone pays a fee to enter a dungeon you created, you’ll receive a large percentage of said fee. Coins can be spent on new enemies, walls, floors and various bits of scenery, allowing you to add more variety and flourish to your creations. While the coins earned for completing dungeons outweigh the cost of entering them and the economy does serve to reward accomplished creators for their work, the added need to pay a fee to also upload levels seems somewhat unnecessary. Blocking the full potential of the creation suite behind a sort of paywall that prevents those who simply wish to build their own levels from doing so, in my opinion at least, flies in the face of what BQM is trying to accomplish. 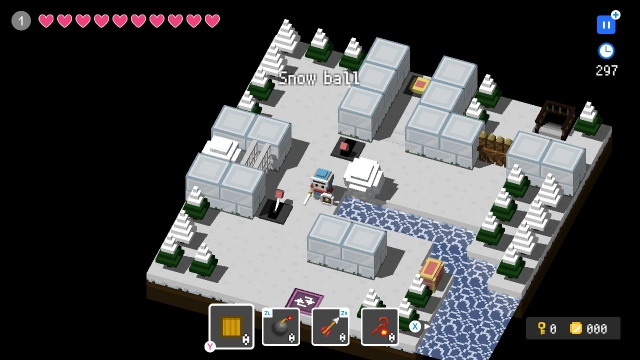 All told, though, a Minecraft-inspired aesthetic and a toolset that is simultaneously deceptively robust and a cinch to use combine to make for a charming and enjoyable title that the more creative players will get a real kick out of. It might not be Super Mario Maker, but BlockQuest Maker is a damn good alternative.

While we all wait for the inevitable porting of Super Mario Maker to Switch, BlockQuest Maker provides a perfectly serviceable alternative for anyone eager to create and share their own devious levels with friends and strangers alike.

The reality is it's here so one side of the argument will say it has earned its keep. The other less mentioned reason fewer people wish to bring up is that it's here because of the money it brings in. This occurrence is a result of Smash's accessible design and wide reaching characters. Fighting games and its characters are still far more niche than those of Smash.

A lot of Smash characters come from platforming roots. Mostly because there are many Mario related characters. The game is console exclusive, its target audience is lower and wider. The type of space control is also considerably different. I'm glad there's still this divide because I always enjoy hearing what people have to say or try to articulate. Usually people's fighting game resumes reflect their opinion.