Broken Age is one of the highest-backed crowdfunded games of all time. With over 87,000 fans throwing their money ($3.45 million’s worth) at their screens, you could say that it has a pretty large following. With Tim Schafer at the helm, creating his first point-and-click adventure game since the extremely popular Grim Fandango, you might say Broken Age’s success is already set in stone.

It can be very difficult sometimes to objectively look at a game when there has been so much hype about it. When something this anticipated comes along, expectations are at a space station high and quite often it becomes almost impossible to meet them. Well Act 1 of Broken Age does a good job of justifying the hype; bringing (what is most important in a point-and-click adventure) a great story. 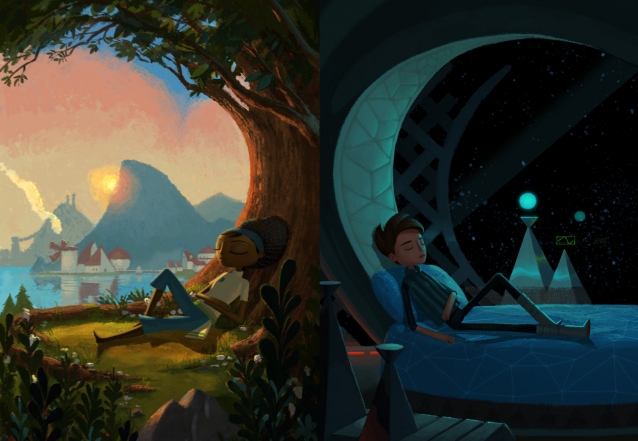 Your journey begins with a simple choice. Two characters lay peacefully asleep before you, in two very different situations. Who do you choose to follow? Will it be Shay, fast asleep in his high-tech spaceship? Or will it be Vella, taking a snooze at the foot of a tree? Either way it doesn’t matter as you can chop and change between the two whenever you like. Both the young protagonists play out very contrasting stories, which is really quite refreshing and makes Broken Age quite unique in its gene pool. The two very distinctive plots have the effect of giving you an escape from each other, for a time at least. So if you get bored, or stuck (which to be honest doesn’t really happen very often) with Vella, you can shift over and explore with Shay instead.

From the get go you’ll notice that the game is very pretty, and even though the style is simple, it is not lacking in detail. From the weird hexagonal space bug things (seriously, what are they?) wiping the windows of Shay’s ship, to the dripping tap in the house of the lumberjack that Vella falls into, no stone has been left unturned. Every area is a delight to explore, and some truly genius quirks have been thrown in, really setting it apart from the rest of its genre. It is definitely more interactive than most; the puzzles are smoothly and subtly slotted into the game, making the plot very easy to follow without those moments of frustration that might be quite commonplace in point-and-clicks.

There is a little bit of a downside to the simplicity of the puzzles. A lot of the time Broken Age can feel quite guided. There isn’t much room- okay, there isn’t any room for your own personal creativity, and choices are well, fairly non-existent. It does make the game very linear and to be quite frank, holds no replay value whatsoever. On the other hand, whilst this means that you can’t play the game the way you want to play it, you are playing it the way it was meant to be played, and although that may seem a bit... traditional in this day and age, it allows the plot to play out the way Tim Schafer wanted it to. To be perfectly fair, there is still a whole second half of the game, so who knows what we have ahead of us; perhaps Act 2 will be full of wild and crazy decisions, TheWalking Dead style! Here’s hoping. 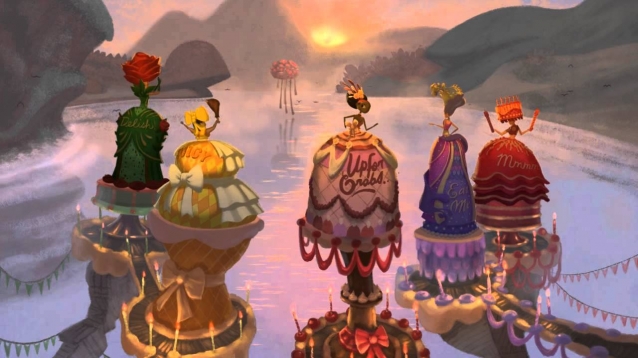 It’s good then, that the story is so great, and aided by voice acting that is infallible. The cast is riddled with vocal veterans like Masasa Moyo (Halo 3: ODST, FFXIII, Batman: Arkham Origins) who voices Vella, Grey DeLisle (Mass Effect 3, Starcraft II: Heart of the Swarm, Far Cry 3: Blood Dragon) and Richard Steve Horvitz (Metal Gear Solid 4: Guns of the Patriots, Brutal Legend, League of Legends) to name but a few. On top of that is a sprinkling of Hollywood’s finest, including fan favourites Elijah Wood who voices Shay, Jack Black the cult leader and the one and only Mr. Wil Wheaton himself (can you tell I’m a fan?) who plays the aforementioned lumberjack. When you have a troupe of this calibre behind the characters on your screen, the effect is absolutely delightful! Coupled with atmospherically perfect sound effects, and appropriately morphing, wonderful music, audiowise, this is the whole package.

What really impressed me with the first half of Broken Age though, was the element of surprise. The game will keep you guessing, and the epic cliffhanger of an ending was, for me, a bit of a bombshell. Very few titles manage to astonish me like this and it’s something that increased my already great respect for Tim Schafer, tenfold. So although I may not be playing through Act 1 again any time soon, Act 2 cannot get here soon enough. Why can’t it be ready already?

A fun game with an endearing art-style, flawless voice cast and great story. Suffers from a severe lack of choices, and currently no replay value at all. 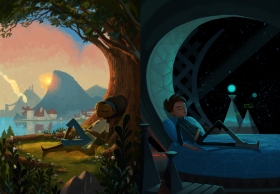