The point and click genre is well known for having interesting storylines, quirky characters and deviously difficult puzzles. Broken Sword is a long-running title in the genre, generally garnering positive reviews and acquiring a large following. The latest game in the series, Broken Sword 5: The Serpent’s Curse came out in 2013 as a two-part episodic release for mobile, PS Vita and PC, and is now available for PS4 and Xbox One.

Broken Sword 5: The Serpent’s Curse casts you once again as George Stobbart, coupled with his friend and partner mystery-solving journalist, Nico Collard. After a brief set-up, the game begins in Paris and combines a murder and the robbery of a painting to create ample intrigue into the game’s larger plot. You’ll spend most of the time in Paris in the first half of the game, with a brief detour to London at parts. Later on you travel to more exotic locations where the scenery and environments are a particular strong part of the game.

The range of environments is complimented by the luscious art-style. The game looks like a watercolour painting with hand-drawn objects and environments appearing sharp, colourful and beautiful. The simple aesthetic is complemented further by the lighting, which gives a dynamic to the locations making them even more of a joy to look at. 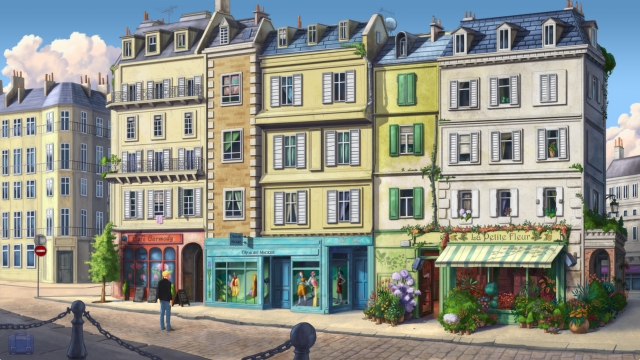 Gameplay resides around puzzles some of which can be especially difficult. The beginning of the game isn’t too taxing, with many puzzles being easy and obvious to complete. You navigate areas by clicking where you want to go, a practical but somewhat strange deviation from titles such as Grim Fandango Remastered and even Telltale games where you can freely move around. It works but considering George travels at a snail’s speed it can make puzzle solving frustrating, as a lot of back and forth is required for certain ones.

Puzzles can also sometimes be solved by talking to people, and you can find out a lot of information this way. It makes for a nice change of pace where you just have to ask the right questions, or show a character the right object. At certain points in the story you’re given choices during conversations. These allow you to make what seems to be important decisions. Whether it be to lie to an enemy or to interrogate a person softly or more intimidatingly. The choices never affected the story too dramatically and I believe either one you choose will end up leading you down the same path.

The biggest problem with Broken Sword 5: The Serpent’s Curse is the pacing. The first half of the game spends too long setting up the story, making it quite boring and tedious. It doesn’t help that George is acting as an insurance agent, looking to solve the theft of the painting for completely financial gains. It’s a shame because the overall story is delightfully interesting, with history and religion offered in detail that teaches players about both. There’s also a lack of truly interesting puzzles to begin with and players will find themselves having to backtrack to numerous locations to get ahead in the story. Saying that, the end of the first act has a great cliffhanger that sets the tone for the rest of the game. From then on, Broken Sword 5: The Serpent’s Curse comes into its own. Puzzles become intricate and seemingly cryptic and you may find yourself trying to use items that have no use. You’re always giving everything you need though and if you don’t have the information, George will say so. If you do find yourself truly stuck there’s a great hint system that guides you in the right direction without ever giving you the answer, unless you use it again. This hint system leaves you free to work out the puzzle and still get the feeling of accomplishment. It’s a small feature but an important one in a game which relies upon its players’ puzzle-solving skills.

Unfortunately not all the puzzles are a success with some of them being downright silly. One in particular combines a police officer and a weak bladder to make a juvenile puzzle that isn’t difficult to solve. The forced attempt of humour also falls flat in a game that usually gives the player meaningful information and interesting facts. For newcomers to the series like myself there’s a character gallery where you can view the history of returning characters. It’s not overly descriptive but it gives you enough information to understand the characters and a little bit of their pasts.

A fun adventure that takes a while to get going but when it does, Broken Sword 5: The Serpent's Curse becomes a thrilling adventure hindered by its beginning.