There are some games that stick with you throughout your life. I must have played tonnes of games as a kid that were eminently forgettable, but only a handful that are truly deserving of being designated as classics. Bubble Bobble is one of those few. It’s always been one of my favourite games and the unique but simple concept has, for me, stood the test of time very well. A few weeks before this game was released, I visited a pop-up retro arcade in Bristol and played through it with my partner in co-op and it was just as much fun as it was back in the day. Bubble Bobble 4 Friends is an attempt by Taito to re-bubble that lightning with a more modern feel.

First thing that you see when you start up the game is a charming little introduction that sets the scene of Bub and Bob being toys come to life in a child’s room. That also serves to introduce the new art-style, which sees you battling enemies that are made from various toys, including LEGO bricks, plushies, and something which looks like a fleshlight spitting teeth at you (I’m not sure what it’s actually supposed to be). That one odd-monster aside, it’s absolutely adorable looking but still recognisably Bubble Bobble-esque. It’s not just a high-def skin on the old game but it tries to be its own game without completely reinventing the wheel. 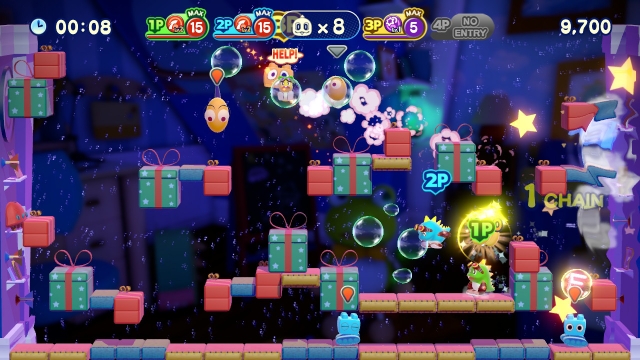 The basic play concept is exactly as before - you blow bubbles to encase the enemies, then pop them with your spikes. You can also stomp down on them this time if you prefer. The lightning bubbles return, but this time it’s apparently sheet lightning as it bursts out in a horizontal line, and there’s also the ability to crouch now, with low platforms being part of some of the levels. The other new feature is special skills. These allow you to do things like shoot bubbles further, fire bombs, or dash safely through enemies. Honestly, I didn’t feel like these were hugely necessary most of the time. They don’t negatively impact the game or anything, I just didn’t find many uses for them compared to the traditional jump and bubble approach.

Throughout the game, Bub and Bob make cute little Japanese utterances much like they did in the Bust-a-Move series. The classic theme tune plays, albeit in a more modern orchestrated version, and sound effects are suitably pleasing to the ear. There are 50 levels, which can be replayed in a remixed hard mode once completed. This means that a single play through isn’t that long, but this is supplemented with the addition of a full version of the original game available from the outset. 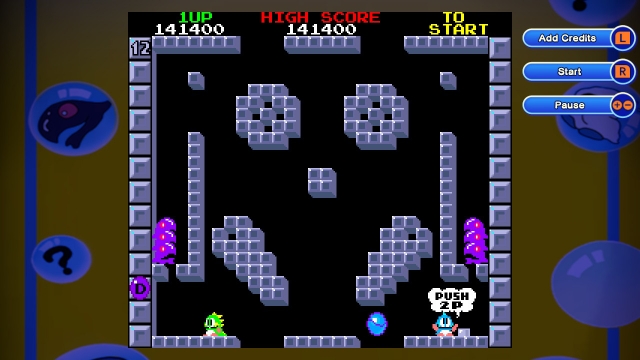 Where Bubble Bobble 4 Friends really comes into its own though is with the multiplayer mode. This is a game that, as the title suggests, is best played with your friends. There is support for single-screen multiplayer with up to four people playing Bub, Bob, Peb, and Pab respectively. It’s not possible to choose a character so if you particularly have a preference then you will need to make sure that your Joy-Con is the right player number. It doesn’t make a huge amount of difference however because as soon as the action starts, it’s so hectic and full of movement that you will probably forget which character you are. In our playthrough, my group uttered the phrase “wait, that’s not me” on many occasions, usually upon the realisation that their character was sat in a corner blowing bubbles at the wall like the weird kid at school that nobody wanted to play with.

The multiplayer scoring is combined, with no one player having their own score. This is a nice touch, as it encourages teamwork rather than everyone scrabbling to get the giant fruit at the end of a level. I say encourages it, because we still did all scrabble for the giant fruit, it just wasn’t what the game would have had us do. That said, the game doesn’t give you a huge amount of direction, it just lets you get on with it. No tutorials to play through or unskippable cutscenes, just straight into the action like the original. There’s also no need to unlock anything in single-player mode before being able to play it in multiplayer. Everything is just there from the outset, including the original arcade machine, which you can play before you’ve even touched the new version at all. 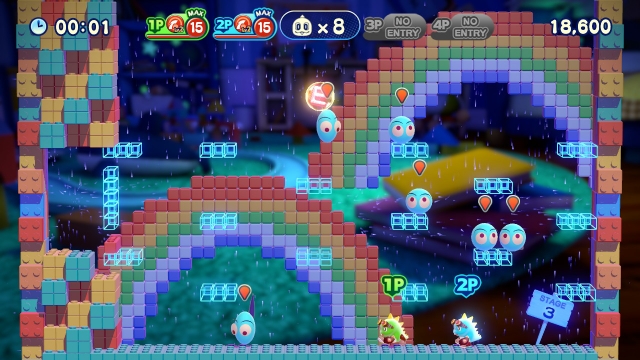 This is the kind of game that the Switch was created for. It’s fast, fun and ridiculously simple to get out at a party and have people playing right off the bat. It’s classic couch co-op and honestly I can’t find anything to fault it other than maybe I would have liked it to be a bit longer. That said, there’s enough replayability by playing with friends that I’ve still got a good 20-odd hours out of it.

It’s a fine line when creating a sequel to such a classic game. Go too modern and you alienate your classic player base, but go too retro and it doesn’t appeal to the new generation of gamers. Taito has got the balance spot on here though, and created a Bubble Bobble for 2019 that feels completely right, but without being mere fanservice. It’s a brilliant game that all Switch owners ought to get in my opinion. 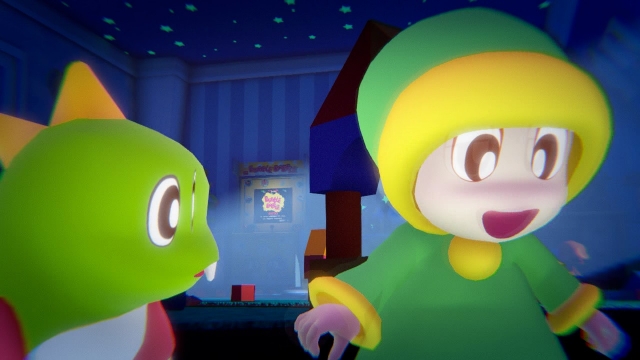 It’s a fine line when creating a sequel to such a classic game. Go too modern and you alienate your classic player base, but go too retro and it doesn’t appeal to the new generation of gamers. Taito has got the balance spot on here though, and created a Bubble Bobble for 2019 that feels completely right, but without being mere fanservice. It’s a brilliant game that all Switch owners ought to get in my opinion. 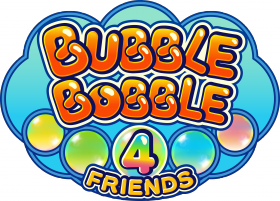