From day one I knew Bugsnax was going to be a special game but even I didn’t know how special. What came were 14 hours of one of the most unique, interesting and charming games I’ve ever played. There’s almost nothing I can compare it to but in the same vein it takes and adapts lots of mechanics and design decisions from a disparate group of titles and perfects them. It’s been a great journey and one I’m already eager to get back to.

You play the role of a journalist, invited to Snaktooth Island by infamous adventurer Elizabert Megafig, a kind of Australian walrus creature who wants to be Indiana Jones. Though your editor tells you it’s a fruitless effort and that Elizabert is a con artist you set off anyway. Upon arrival your airship is attacked by one of the island’s more fearsome bugsnak residents and you’re thrown from the ship and lose consciousness. You wake up to find a solitary strabby (the adorable strawberry bugsnak shown in the trailers) looking down at you. As you come to and begin to stand, the strabby runs away. It’s this moment that perfectly encapsulates the bizarre wonder of Bugsnax.

It sounds like an acid trip but curiosity gets the better of you and it leads you through a story full of fantastic characters and some genuinely good twists. Each and every one of your fellow grumpuses (the Sesame Street monster style race of the main characters) is beautifully written, incredibly acted and straight up a joy to be with. You will first meet Filbo Fiddlepie, the de facto mayor of Snaxburg as he enlists your help to find the residents of the town and bring them back. Filbo, just like each and every one of the characters on the island, goes through his own separate character arc and develops from a ridiculous figure to a confident leader. While I am talking about the characters, Bugsnax has perfect LGBT representation. Of the island’s residents there are two same sex couples and a character with they/them pronouns. None of these are made to be a big deal, they just exist. The character with they/them pronouns doesn’t even address their gender in the story, the characters just refer to them as they/them and nobody bats an eye. There are four couples within the game and all of them have different dynamics; an old married couple torn apart, young love between two fully grown adults blossoming, the love of two lifelong friends and the anxiety of telling each other and a couple who are well and truly in love and need each other. There are many other characters to talk with but I wanted to highlight these couples because it shows how perfectly the writers at Young Horses have realised each individual grumpus. Everyone brings something different to the table and each character grows and evolves, not just through the main story but through their own individual side stories and even incidental storytelling.

I don’t want to go into too much information about the story itself but it delivers an intriguing narrative inspired by games like Bioshock, told incidentally from its environment. There are also a couple of really great twists scattered throughout. The storytelling is wonderful: as a journalist it’s your job to interview each character but also to piece the scraps of evidence together to uncover the secret of the island. You often feel more like a detective or a puzzle solver working your way through different scenarios and Bugsnax constantly kept me engaged and wondering what was going to happen next. If I had to nitpick, I’d like the true mystery of the island to emerge a bit earlier or play a slightly bigger role in the early scenes but the truly terrific ending chapter more than makes up for any failure on that front.

You may still be wondering what exactly Bugsnax is, well it’s a first-person monster tamer puzzle game. Way back, there was an interview listing the influences of Bugsnax and keeping them in mind it’s very obvious what’s taken from where. It takes its storytelling and environment from Bioshock, it has a hint of Dark Cloud’s town revival and planning, it’s got Ape Escape’s gadgets and Pokémon Snap’s spirit. Really the game is a big puzzle. In order to capture the titular bugsnax you need to find out exactly how to snare them. At times when you’re fighting the bigger snax on the island it even feels like Monster Hunter, where you’re exploiting the situation to win out over something with incredible strength. With some bugsnax this is easy; all you need is a trap and some ketchup to lure it, with others I still find myself confused even after capturing it. That’s another of my slight nitpicks, some of the bugsnax later on either require some absolutely nonsense logic to catch or I’ve been missing something. I could have been missing something though because the way to interact with these creatures is vast and I’ve probably only scratched the surface. 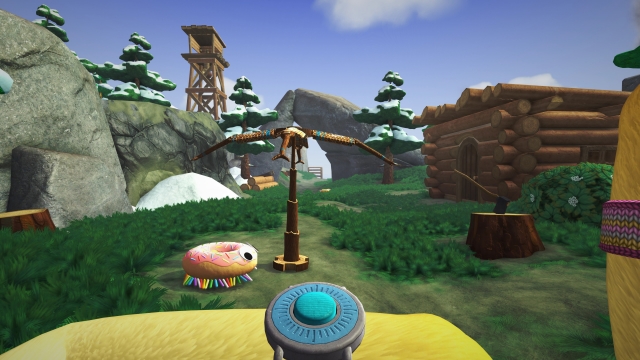 As you progress through Bugsnax, you will unlock more gadgets for you to use and all of these gadgets can be combined in interesting ways. You can launch your trap into the air to catch those high up snax or attach a tripwire to your strabby ball (literally a hamster ball for strabbies) and use it as a moving clothesline. There are so many ways to connect these gadgets that I’m sure I missed so many. All together it makes for a game with so many inventive ways to play. So much of my time was spent making bugsnax fight each other to take advantage of the situation and catch one when it’s dazed. During these times was where I found a glitch though. In the more chaotic fights (and believe me it can get chaotic and explosive) I found that sometimes the bugsnax would just fall through the floor. I’ve no idea why this happened but it wasn’t really a big deal because they would just respawn a little bit later and continue on. Actually I just found it more entertaining amidst the crazy interactions each snak has with others. I could speak about the interactions between the different bugsnax for hours, they all have unique personalities and reactions, not just to the player but to each other as well. It’s a shame that there are as many duplicate types of bugsnak as there are, particularly the strabby, soda can and snakpod types but even then each design is very appealing.

I think the weakest aspect of Bugsnax is its visual design. While it looks great from a distance and the art style fits perfectly there are some texture issues to be found. Usually this is only found in the surrounding environment when you look up close but it’s still there. The characters and snax themselves don’t suffer from this so clearly the polish was put in the right places and this is really only due to the team’s limitations. Saying the visuals of Bugsnax is its weakest aspect though just goes to show how well executed the rest of the game is. I do need to highlight the soundtrack though as it’s truly gold. Composer Seth Parker has done a spectacular job of creating a super synthwave soundtrack, one with no low points but some really high highs. One of my favourite tracks is the one that plays in the Sizzling Sands, it complements the perfect desert vibe with a beautiful melody but there are plenty of other great musical moments throughout.

I have to say a few words about the voice acting too, which is absolutely top notch. The cast not only features veterans like Yuri Lowenthall and Fred Tatasciore but has some incredible performances from Max Mittelman as Filbo, Helen Sadler as Elizabert and Fryda Wolf as Eggabell. All the bugsnax voices are perfect too, my favourite is Charmallow, a flying s’more that’s on fire. Everytime I hear that voice it melts my heart like it melts itself. All in all, I can’t find any real fault in Bugsnax. Trying to find things to criticize has me nitpicking and all the great stuff the game has to offer means these nitpicks don’t do much to put me off. Young Horses have taken a unique concept and executed it perfectly, again. Unlike their previous game, Octodad: Dadliest Catch, Bugsnax isn’t just bundles of fun but it also carries a human and emotional weight behind it. Given a story that isn’t just jokes, Young Horses have proven they’re capable of making something more. Bugsnax is special and it’s special in ways I couldn’t have imagined. It’s also special in ways I’m sure I’ve not even seen yet.

Bugsnax is special. Young Horses have a unique, interesting and charming concept that’s been executed perfectly. There are a few nitpicks here and there but if you have any interest in Bugsnax you’ll find a game unlike any other and one I can’t stop saying good things about.

I am absolutely loving this game so far. And totally agree with you on LGBT representation done right. The non binary character hadn't even registered with me until reading this and that's how it ought to be done in my opinion.

I think the way this representation is handled is part of the reason I love the writing in this game so much. They're so open with these relationships out of the gate and no one mentions it or makes it a big deal. It's not something I remember seeing in any other game and I appreciate it a lot.