Vertically scrolling shooters are seeing a little bit of a resurgence on Steam as Japanese developers are starting to embrace the PC in a serious way and BULLET SOUL is another title making its way to Steam from its original Xbox 360 release. 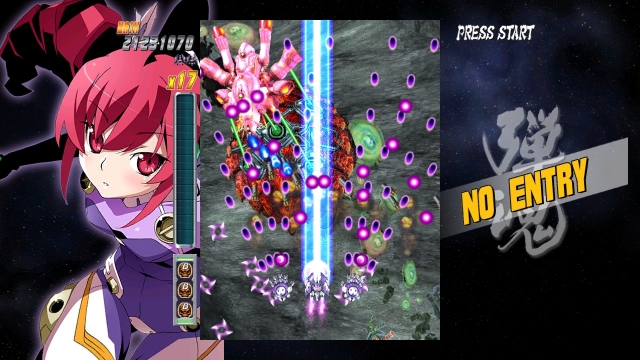 BULLET SOUL is, at face value, a typical bullet hell or danmaku shooter. As is common to the genre, you pick from a selection of ships each with a different weapon configuration then blast wave after wave of enemies as you dodge the barrage of bullets being hurled at you.

So what makes BULLET SOUL different? The game's main gimmick is that bullets die, when you destroy an enemy, any projectiles that particular enemy let loose change into ghostly wispy versions of themselves rendering them inert. This gives the bullet-dodging an aggressive, dangerous feel as you are pushed into trying to destroy enemies quickly to reduce the insane amount of bullets trying to murder you. The scoring system encourages this behaviour too; quickly dispatching enemies also builds up your score multiplier.

The game has four modes; the regular Bullet Soul mode which sees you blasting through five stages of enemies, a B mode with an extra character and remixed enemy patterns, Bancho which is a single stage score-attack mode and Caravan which is a timed score-attack. 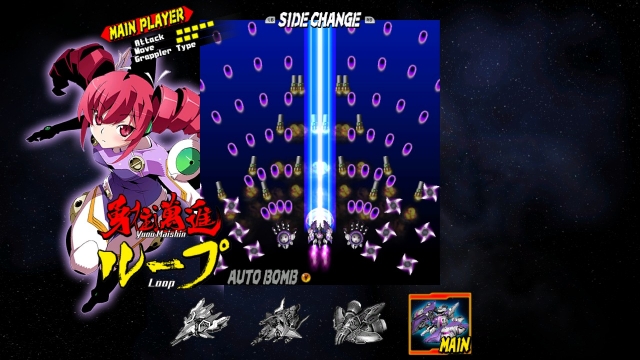 The game has a selection of four ships, three of which; Yun, Sadahl and Zenichi are available in all modes with the fourth, Loop, available in the remixed B game mode. All the ships feel different as Yun and Sadahl both have a lock-on element to their focus fire and Loop has a melee punch in hers. Loop in particular playing into the games aggressive feel forcing you in close to take advantage of her strong fists whilst placing you in intense danger.

BULLET SOUL features fairly standard gameplay but the ghostly bullet gimmick gives it a different kind of intensity and the enemy patterns are designed to focus in on that intensity. It starts out relatively easy but by stage three has ramped up the barrages to panic-inducing levels. This isn’t a bullet hell shooter for players new to the genre but it’s a very competent entry in it. It also has a rather nice art style, the background level art and enemy designs are attractive and it all has a cohesiveness that is satisfying to fight through, crucially the enemy bullets never clash with the other elements. The soundtrack is also great, featuring music from the venerable pairing of Kenji Ito (known predominantly for his SaGa and other Square Enix work) and Kohta Takahashi (who contributed to the wonderful Ridge Racer Type 4 amongst many other titles).

The game’s PC port does have some some tiny niggles, there are no resolution options with your only choices being to play in a 720p window, or at 720p in fullscreen mode. This unfortunately leaves the game not looking as sharp as it should do. The game also supports local co-op play however it doesn’t list the keyboard controls anywhere for either player so it involved a little bit of trial and error to find them, with two controllers however this isn’t an issue.

BULLET SOUL does however offer up a rather comprehensive options menu allowing you to adjust the play area considerably as well as play the game in both Portrait (or Tate, from the Japanese for vertical ‘tateru’) and Landscape (or Yoko, from the Japanese for horizontal or side) modes for those with rotatable monitors for a truer arcade experience.

All in all BULLET SOUL is a great little shooter, it’s challenging and the ghost bullet gimmick indirectly changes how you need to play to earn high scores. The game is solidly put together and any fan of bullet hell shooters will definitely want this in their collection.

A great little shooter with some niggly PC port issues. A challenging but fun title whose ghost bullet gimmick makes the gameplay aggressive and intense. Not for everyone but for fans of the genre it’s a solid title.