In every entry of this series, my boys and I will play a game together, with the goal to help you find some fun games that everyone, no matter the age will enjoy. Or, we may find a dud that should definitely be avoided. A lot of people grew up playing games, so it’s great to be able to make memories and enjoy games together as a family. 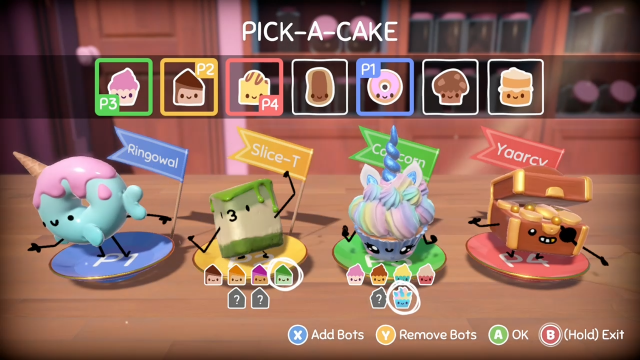 This week we are actually checking out a game that we have played the demo for, Cake Bash, by developers High Tea Frog. The demo for this game was available during the Summer Bash event on Xbox, and we have played a ton of it since summer. Now that the full game is being released, there are a lot of characters and challenges that will be new to us. I’m curious to see what kind of story they cooked up as to why the treats are competing against each other. 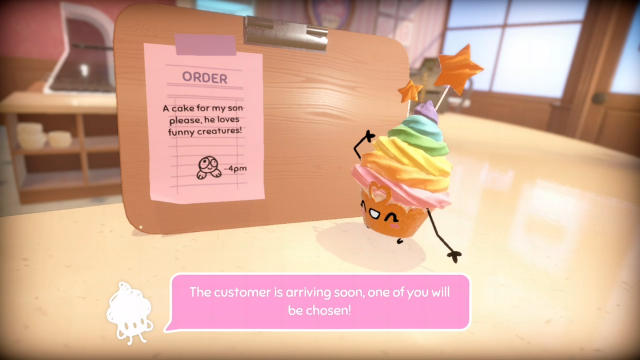 The main quest of the game is called “Get Tasty”. You start by choosing which yummy confection you would like to play as, and if you would like to have other local players to compete against or bots. You are all carried on a serving tray and placed into a baking display case. The tasty confections decide to bust out, so they work as a team to open the cover to escape. A super adorable cupcake, with rainbow coloured icing and a glittery liner, informs you that all the baked goods are competing to be the tastiest looking item and get chosen by the customer. The customer won’t just pick any treat however, they need to follow the theme that the customer has requested. The more decorative items you have that match the requested theme, the more points you will earn. Customer requests can range from wanting something with a lot of chocolate, silly creatures for a kids party, or fancy treats for a wedding. 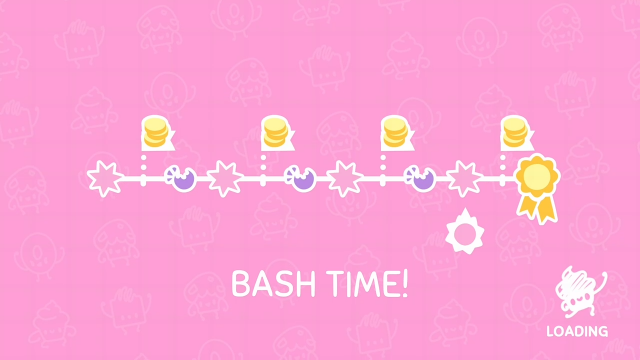 There are three components to the Get Tasty round. First you compete in the Bash Time round, followed by Snack Time and then Topping Shopping where you shop for decorations. These decorations come at a cost, you will have to spend chocolate coins that are earned by competing in mini-games. There are 13 different mini-games set in one of five different stages, including the patio, the factory, the beach (cause who doesn’t love sand with their icing), birthday party and bakery. Each of the stages has something special you can interact with or have to avoid. The beach has beach balls that can crash into you, and hermit crabs that will pinch you. If you are super competitive, try grabbing a crab and throwing them at opponents. The factory has a button, that when hit, will turn on the stove element to burn your enemies. The patio has a hungry pigeon that will peck at you. The bakery has falling display cases that land on top of you squashing you. Then the birthday party has slices of cake being cut out of the stage to be served leaving large gaps behind. These interactive elements will definitely add more of a challenge in your pursuit to become the top dessert. The demo for Cake Bash gave us just a small taste of the full mini-game menu. Fork Knife, Campfire, Sweet Victory, and Fruity Pie, the games in the demo, are joined by eight new challenges. Cookie Bash, where you smash as many fortune cookies as possible. Sparkler, will have you running around the level trying to carry a sparkler longer than your opponents. Hundred and Thousands, requires you to stand under the stream of falling sprinkles, but, be wary of the “sprinklematic” that will break and fall. Neapolitan, requires you to catch and stack as many scoops of ice cream on your cone as possible, while being sure the ice cream doesn’t tip and fall off. Scones & Smores, you use an icing bag to decorate the scones and smores that appear before you, by covering them with as much icing as possible. Fondue or Die, skewer the fruit floating in the chocolate fountain, the more you can skewer at once, the more points you get. Bakewell Ballet, features dancing cakes that you have to throw fruit at to get as close to the centre as possible. Caterpillar has a swiss roll running around the stage in pieces. You have to chase and grab a piece with a fork and put it on your plate. Wasp Attack that requires you to squash as many wasps as you can, they are incredibly realistic looking, and like in real life, very hard to kill.

Playing any of these mini-games will add them to your Recipe Collection where you can challenge any of the games that have been previously played. This is great if you just want to practice or try a game again and not have to do the whole story. Since the games are chosen randomly, there is no guarantee that the one you want will show up. In the Get Tasty mode, when you finish the mini-game you will be rewarded chocolate coins according to your placement in the game. 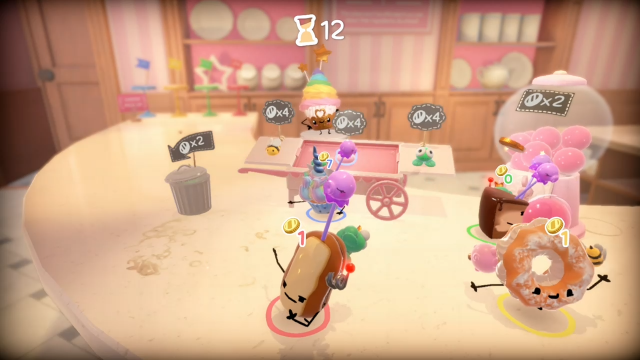 When you get to shop for your decorations, you have to be fast. There is only a small quantity of items available, and you don’t want your opponents to get everything before you. If you buy three of a smaller item, like a bee decoration, it will turn into a large version worth more points. If you are too slow or you don’t have enough coins you can always test your luck with the gumball machine. Sometimes you will get a good item like a cherry gummy, but there is a risk you will get a chunk of stinky cheese or fish bones. These items will take points off of your score so you have to figure out if it’s worth the risk for you. At the end of five battles and numerous shopping trips you will find yourself on the cake stand to be judged by the customer on your decorations. The winner will be the treat who has earned the most points, not necessarily the who won the most games. This game is a ton of fun and it is hard not to fall in love with all the super cute characters with their hand-drawn arms and eyes. Make sure you choose who you want to be fast to make sure someone else doesn’t take them first since there can only be one of each character. The boys were constantly fighting over who would get to be the adorable unicorn cupcake. We kept playing just to make sure we could unlock everything the game has to offer. Some of the mini-games really are challenging no matter your age, just because you are an adult doesn’t mean balancing the ice cream is going to be any easier, or smashing wasps will go your way. I don’t feel that gave me an unfair advantage over the boys.

There is a ton of replayability here with lots of cute characters, levels and games to unlock. Cake Bash is a great multiplayer game that is a ton of fun, no matter your age. Though, I feel if you were playing by yourself against bots all the time it definitely wouldn’t be as exciting, you would get tired of it pretty quick. For my family, Cake Bash is definitely our favourite party game of the year, and one we will keep going back to! I hope more levels and mini-games will become available to keep the game from becoming stale after a while.

Cake Bash (Reviewed on Xbox One)

An incredibly cute game full of food themed mini-games and adorable characters. This game really shines when played multiplayer locally or online. Prove that you have what it takes to become the tastiest treat in the bakery!