The other day I was scrolling through all the games available on the Xbox Game Pass and I came across this game that was promising a “new game experience”. Instead of the usual survival horror game where the player is being stalked and hunted, the player takes the role of the amorphous monster hunting down the humans who imprisoned you. This piqued my interest, the premise definitely seemed unique and checking out the screenshots I was pleasantly surprised to see a 2D platformer featuring pixel style graphics with backgrounds that almost look painterly. I am a big fan of a lot of games Devolver Digital has produced in the past so I set the game to install as soon as it came out and after a few weeks wait the game was finally available to play. 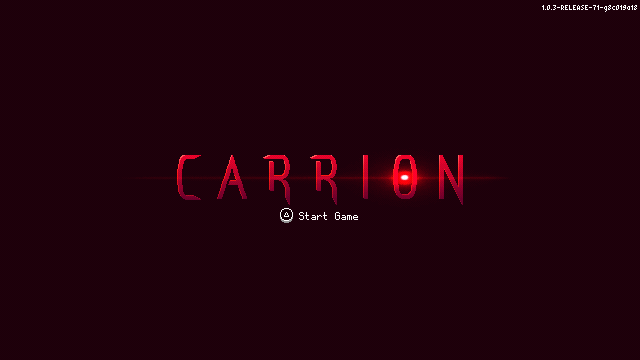 As soon as you see the title screen for the game you are reminded of a John Carpenter style movie like The Thing. Even the creature in Carrion reminds me of the shape shifting creature in the film. The music is creepy and full of suspense which works great as you sneak up on your prey, it fits the dark atmosphere of the artwork. Being able to throw grates and furniture at the humans or making growling sounds to make them scream was definitely enjoyable. This might sound horrible but before playing this game I never realised how fun it was to scare and hunt down people! (In a videogame! I'm not a horrible person!) 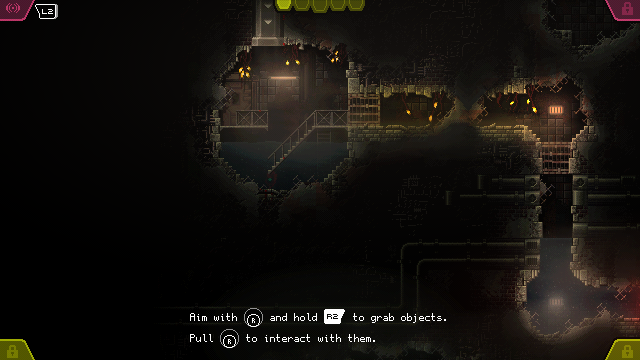 The controls in this game felt great. I can't remember the last time I played a game where it was so easy to control the character. It almost feels like the monster is gliding. It's so smooth, fluid motion. I'm so used to playing platforming games where you have to jump up the walls so it's neat to see the creature using its long tentacles to grab onto the ceiling to attach and pull you across where you need to go. The monster has different abilities to use, there is a growl that you can use to scare the humans or to use for echolocation to find hidden areas, the ability to open doors and grab objects like humans so you can eat them. Eating people increases your biomass and size so while playing you have to make sure to keep your strength up! Especially since all the humans aren't weak and unarmed, a lot of the characters you come across are fully armed with handguns or machine guns and won't hesitate to attack. You have to be sure to be strategic in how you take out your victims so you don't take too much damage or you will be sent to the last point you save at. The game is saved when you assimilate, this is when the monster enters a crevice or opening then expands and takes over different areas of the stage. As you explore you will come across other creatures that the scientists were working on and you will be able to gain new abilities that will help you traverse the environment or take out your enemy. I don't want to ruin anything but some are really unique and useful. 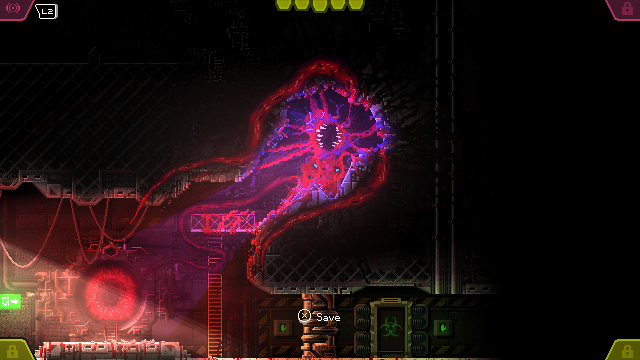 I played Carrion on both the Xbox One and on my PC using a Xbox 360 controller, and any time I died in the game it wasn't the fault of the games controls, just my own errors. Most of the time I was just rushing in and not being sure to have cover available when I needed it. Level wise that are some areas that you will not be able to access at first until you get the right ability or throw the required switch. So you may need to go to an area a few times to totally get through it. The only thing that may be a downside is you don't have a map, but really why would a monster have a map? You will just have to explore the whole environment.

There is so much more I could say about this game but I really don't want to spoil anything. I will say I had very high expectations from seeing the trailer and screenshots ahead of time. I am so excited to say that this game definitely delivers! If you have Game Pass you really have no excuse not to check out the game. Even if you don't have Game Pass Carrion is on Steam and is also available on the Nintendo Switch. Or if you aren’t sure about it at least check out the Steam demo. It is definitely worth experiencing for yourself. Kudos to Phobia Game Studios for creating such a unique and immersive game!

CARRION (Reviewed on Xbox One)

This a super fun immersive game that is a must play for not only horror fans but anyone looking for a unique gaming experience!