When the team at ION LANDS learnt of Cyberpunk 2077’s delay from April of 2020 all the way to September, there’s no doubt that any passer-by to their offices would have heard the sound of thunderous cheers and champagne corks popping. Not because ION LANDS has any particular rivalry or feeling of ill-will towards the folks at CD Projekt Red, but because, had they released at the same time, the studio’s own cyberpunk-themed game, Cloudpunk, would have certainly been overshadowed by Cyberpunk’s immense hype. I mean… only one of the games has Keanu Reeves, and therefore only one of them could have ever possibly come out on top. Fortunately for ION LANDS, Cyberpunk 2077 was delayed, leaving Cloudpunk to take to the stage as the futuristic, dystopian star of April 2020’s release lineup. Does it fill the boots left empty by CD Projekt Red’s absence? No, of course not, but it does offer a unique and memorable—if flawed—little narrative experience. 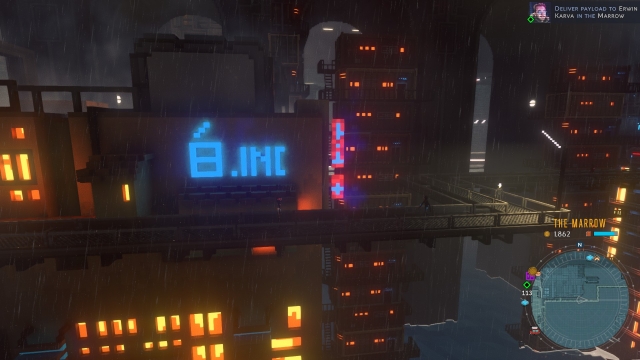 More than anything else, Cloudpunk wants to paint a picture—create an impression—of its world. The open city of Nivalis, packed tight with floating buildings, aggressive neon lights and industrial grime is the player’s to explore—mainly by car, but occasionally on foot too. There’s a main storyline, even gameplay of sorts, but the game’s lasting impression comes with how it constructs and immerses the player within its world. With a voxel graphical style, the game is aesthetically pleasing in its own, interpretive way... and it knows. The game will often adjust the camera angle during on-foot sections to show parts of Nivalis at ‘just the right’ angle. And while it’s true that the dystopian Blade Runner-esque setting of Cloudpunk is nothing new—maybe even a little over-familiar to some—no game that I’m aware of has set out to capture a world for players to exist in quite like Cloudpunk.

As established, Nivalis is the star of the show, but who’s the official protagonist? Well, the narrative plays out through the eyes of Rania, an outsider to the city on her first night working for the illicit delivery service Cloudpunk as a hover car driver. Being an outsider, she shares a lot of the player’s unfamiliarity with the customs, beliefs and norms that Nivalis’ residents take for granted. Over the single night in which the game takes place, Rania (along with her endearing AI dog companion, Camus) will take countless delivery jobs; interact with people and androids from every layer of Nivalis’ class system; get mixed up in crime, conspiracy and corrupt corporations; and come face-to-face with a rogue AI. If all of that sounds just terribly exciting, then you’re being misled: Cloudpunk’s interesting story beats are constantly let down by its mind-numbing pace and lack of engaging gameplay (or any much gameplay at all for that matter). 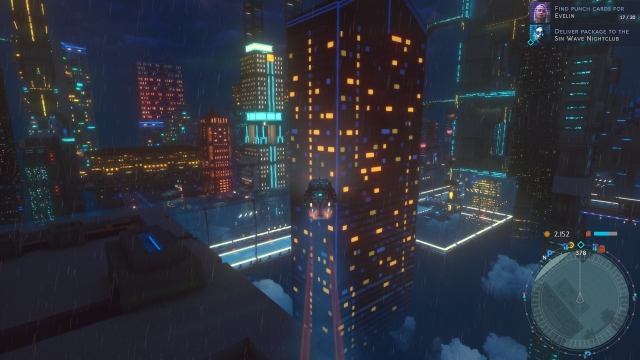 Pick up a package, listen to a conversation; drive the package, listen to a conversation; walk with the package, listen to a conversation; deliver the package, listen to a conversation. Was that tedious to read? It was certainly tedious to write. Cloudpunk plays like a decent book that won’t let its reader turn the page until they’ve walked a few laps of the room. It’s not that the dialogue is bad or the story is dull, but the delivery jobs that bookend them are devoid of challenge, fun or engaging mechanics. Outside of a few timed objectives, it’s a straightforward “go from A to B” affair, time and time again. There are fast lanes that boost a player’s speed slightly, and weaving through traffic in those quickly became the only source of entertainment I could derive from the actual gameplay. The simulation-lite features—occasional refueling and vehicle repairs—are a slight nuisance, but not enough to warrant any significant outrage, and the handful of vehicle upgrades (literally three, I think) make little noticeable difference to how the driving feels. If Cloudpunk genuinely wants to make the player feel like an underpaid delivery driver, it succeeds. For me, sitting down to play Cloudpunk evoked twinges of the same feelings that usually hit me when clocking-in to a long retail shift.

If the driving sections are boring, the walking sections are downright loathsome. Countless floating ‘islands’ make up the pedestrian zones of Nivalis; navigating them feels like trudging through a multi-floored neon maze. It doesn’t help that the islands are filled with too many utterly pointless collectibles. Okay, the collectibles aren’t totally pointless: they CAN be sold for cash, but that’s only useful if a player wanted to buy all the inconsequential cosmetic upgrades (they won’t). The drawbacks of a fixed camera also rear its head during the on-foot sections. For every time the game shows off a cinematic, desktop wallpaper-worthy camera angle, there’s another time where it just causes disorientation. It’s a less severe version of the fixed-camera angle issues that plagued the classic Resident Evil titles. It’s in meeting Nivalis’ residents—the game’s ensemble of wacky, twisted and downtrodden characters—that moments of respite from the sour gameplay are found. Among the dozens of encounters are a socially inept android who tries and fails to seduce Rania with misunderstood pickup lines; two robot punks who rebel against ‘the system’ … by creating beautiful gardens and playgrounds; a popstar whose identity is stolen by the corporation that made her famous; and a hardboiled android detective whose dialect is lifted straight out of a 20th century film noir. Some of these characters are encountered as part of the main story; others are merely one-off or recurring side stories. All of them—even the poorly written and/or acted ones—help paint the aforementioned ‘picture’ of Nivalis. It’s these interactions and how they bring the game’s city to life that make Cloudpunk so hard to dislike. Make no mistake: the gameplay IS boring and it WAS a chore to play, but I look back on it with a sense of fondness. Like a good book, its characters lingered in my mind.

There aren’t many games like Cloudpunk—for better or worse. Nivalis, its residents and their struggles are genuinely memorable, even if the acting can be a little ropey. The environments are nicely stylised too. It’s a shame that, in the gameplay department, Cloudpunk simulates the boredom of a minimum wage job a little too well. Looking back, I’m happy to have played Cloudpunk, but I never want to sit through it again.

In the gameplay department, Cloudpunk simulates the boredom of a minimum wage job a little too well. Looking back, I’m happy to have played Cloudpunk, but I never want to sit through it again.

Become the Eyes and Ears of a Cyberpunk World in Cloudpunk

It's a shame that this doesn't have better gameplay, as I've enjoyed the trailers they put out.

Oh there's denying it's a pleasure to look at. If only there was more to do outside... Well, just looking at it!