‘Exhilarating’ is the best word to describe the feeling of playing Clustertruck. The feeling of leaping from truck to truck, barely catching the back of trailers and narrowly missing death, is perfectly exhilarating.

Clustertruck is a free-running action game in which the main objective is to jump from semi-trailer truck to semi-trailer truck in an attempt to reach a goal post at the end of each level. The player must stay atop the trucks while dodging obstacles such as tumbling boulders and spinning lasers, and touching the ground results in an instant death. It’s a basic premise, but it’s executed very, very well.

The game is played in first-person, and it controls very well. The physics are taken to an extreme, allowing for huge leaps and big explosions, but that makes the game a lot better than if the developers had gone for more realistic gameplay. Trucks move at high velocity, exploding when they hit walls or each other, sending trucks (and sometimes the player) flying through the air. Jumping between trucks feels fantastically exciting, there’s very little gravity but the game still maintains a lot of speed, letting you change direction while flying through the air and dropping you to the ground slowly enough that you can control where you land precisely, as long as you’ve got some skill. 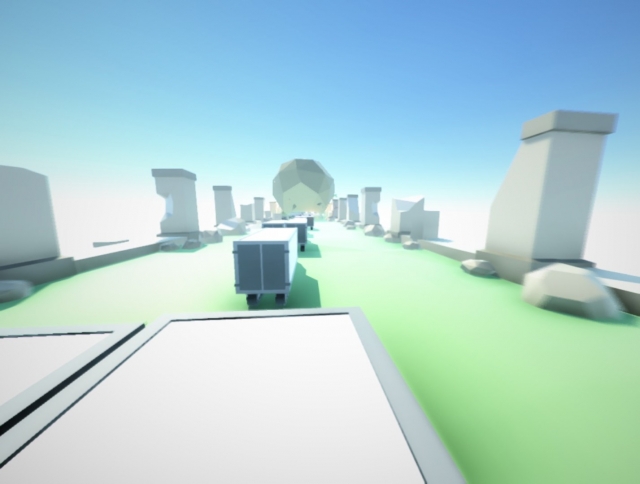 Almost every level offers some new obstacle or challenge to get through. The designs are really varied, and acing a level takes a massive amount of skill and perseverance. The campaign is made up of nine worlds, each with ten levels. Levels take only a minute or two apiece, but completing the game takes a whole lot longer with the large amount of deaths you are likely to suffer through. I cried out in frustration multiple times while playing Clustertruck, something I nearly never do when playing games. But it wasn’t the kind of frustration that makes me want to stop playing. No, it’s the kind of frustration of knowing that I was oh so close to finishing a level, and that feeling continuously kept me hitting that restart button to try again. Thankfully, you are able to restart near-instantaneously after death, which lead me to keep hitting restart for just ‘one more try’.

There’s a slight bit of randomness every time you restart a level, making it so you cannot just memorize the exact movement of the trucks to beat the game. Sometimes trucks will go a little slower than they did before, or maybe they’ll drift left instead of right. It may not seem like much, but it can seriously affect how a level plays out when you factor in all of these trucks, which can sometimes number over fifty in a level, moving differently than they did the last time you attempted a level.

Plenty of replayability is on offer here, some offered by the ability to play against the ghost of your friends in an attempt to beat their best times. Most of the replayability, though, comes from the custom map editor. You can create a custom level made up from the many objects used throughout the campaign, then upload it to the Workshop and make it available for others to download and enjoy. 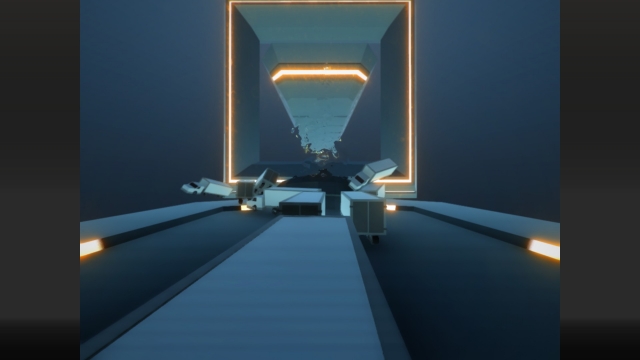 I myself took four hours to finish the campaign, but individual playtime will differ wildly from player to player. Some will struggle with most levels, dying constantly. Others will easily blast through many of the levels I found difficult. I like to think that my time is at least average, but it’s definitely possible that average time could be much less. It really depends on how good you are at the game.

Visually, the game isn’t anything special. The lighting is nice, but that’s pretty much the best thing I can say about how this game looks. Every one of the trucks in the game looks the exact same. Each world has a distinct style, so the environments never get too boring. I didn’t notice any frame rate issues, which is important, as even the slightest bit of lag would often result in death. The soundtrack quality varies from world to world. In a couple of the worlds, it’s full of pulsating, blood-pumping tunes. In others, it’s only average. 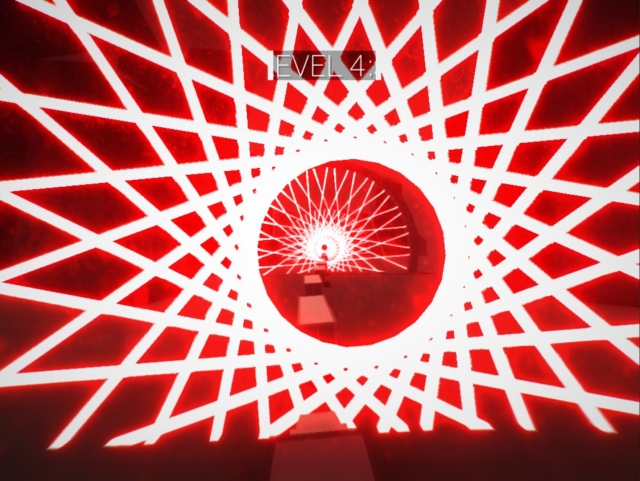 Clustertruck is exactly what it’s aiming to be. It’s fun, fast, and fluid, letting you lose hours trying and trying to jump just right, to move just fast enough. The custom maps that the community has already made and sent out into the world are sure to provide plenty of replayability, complementing the great levels that come with the game.

Clustertruck is Bringing Chaos to the Nintendo Switch

Win a Copy of Clustertruck

Thanks for the feedback, much appreciated!

Im going to school for journalism next year, and i just started a gaming blog to get some practice and experience.

It's a very fun field, I'm sure you'll love it.