Consortium is a very difficult game to review. Essentially a futuristic, sci-fi, FPS, murder she wrote, it puts you in the shoes of a character only known as ‘Bishop 6’ and asks you to make decisions based on almost no knowledge of the universe you’re dropped into. This leads to a frustrating and confusing experience and left me with more questions than answers.

From the outset the game makes you very aware it’s trying to be different. You’re told from the very beginning that this is supposed to be an ‘Alternate Reality Game’ (ARG) and that you’ll be sent into the future via a satellite...or something like that. It managed to suitably confuse the hell out of me in the opening few minutes, having me agree to a disclaimer about messing with timelines. 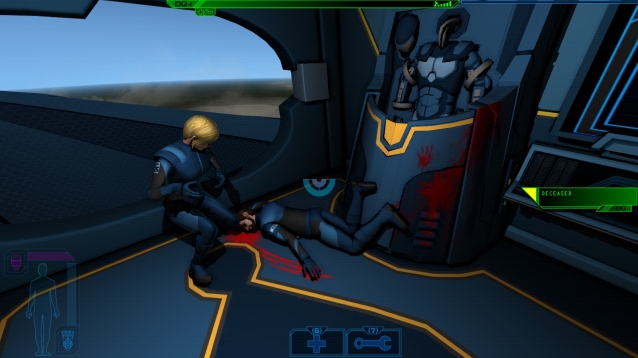 As much as I appreciate the attention to detail and the way the game is designed to suck you in, I feel this is done in a cack-handed manner. The player is not really aware of anything that is going on even after being dropped into the alternate reality, leading to the dialogue options you’re given almost straight away seeming meaningless. How is a player supposed to make decisions made on zero knowledge? The game also makes you feel stupid for asking questions; replies from NPCs are often condescending, acting as if you should already know the answers.The FPS aspects of the game seem almost tacked on. The game is first person which is fine; Myst was a first person game and didn’t need shooting elements to create an engaging story, and that was over twenty years ago! The environment you’re dropped into is a huge airship called ‘Zenlil’ where you’re faced with a number of different challenges that present themselves. There are, apparently, several different ways to come to different conclusions which affect the story, but they all come to the same ending. 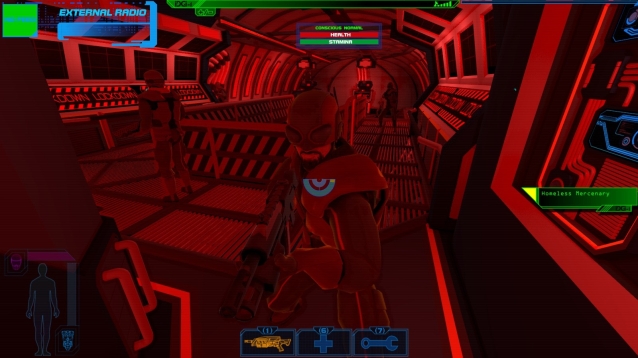 The plane you inhabit for the game’s duration is full of NPCs who all, for the most part, are able to talk to you and converse about current issues aboard the ship. This does lend nicely to the whole ‘whodunit’ type scenario that sets up the majority of the game and does show a lot of effort on the part of the developer, Interdimensional Games, to give the player a truly open world narrative-driven experience. Want to know something? Either ask someone's opinion and make decisions based on that or go with your gut. The issue I had was that it seemed that no matter what choices you made, it led to the same conclusion and so the wool pulled over the player’s eyes gets very thin towards the end of the game. The same reason Bioware had a huge backlash over Mass Effect 3 was that players were given tonnes of choices throughout the game and then given no real choice of the ending, unless they liked different colours. Consortium doesn’t even appear to offer that; it’s always the same ending. 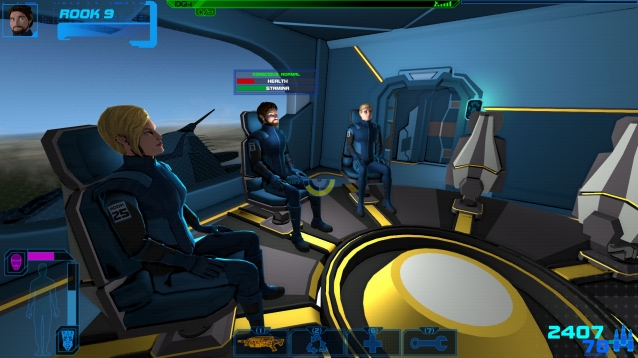 Aside from the story, which is the best part of the whole game, the voice acting is worth mentioning as it’s the best in a game of this low a budget. To say I was genuinely impressed wouldn’t do it justice. These were some of my favourite interactions with NPCs in a game. It was a pleasure to talk to, interact with and just even overhear conversations between other members of the crew. However, the aesthetic is very much something I felt really didn’t suit the game at all. Very bright and bold, with an almost cel shaded look creates a large juxtaposition to the storyline and gritty world that is portrayed.

The actual shooting segments are few and far between, not to mention completely unnecessary in a game mostly about its narrative, almost giving off a notion of desperation to fit in and sell copies, not to make the game they wanted to make. The overall movement feels fluid but the gunplay feels tacked on with no real finesse or depth. This leads to the tacked on sections feeling even worse. 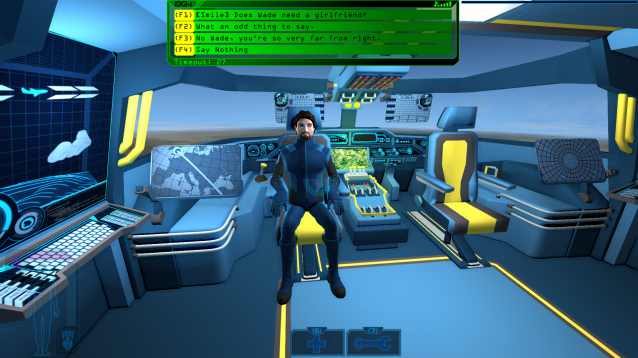 Towards the end of the game I started to feel frustrated with the lack of information given to the player; even if they were in the right ballpark with their investigations into the whodunit aspect of the game, this didn’t appear to be acknowledged at all. Also, one of the later stereotypes used to create a ‘bad guy’ scenario came across as distasteful and disrespectful in conflict with the earlier well written story and characters.

At the end of the game I felt frustrated by my experience and felt no real desire to play the game through another time, since my save had been deleted by an update applied to the game while in the process of reviewing it. The overall sci-fi themes are interesting and might lead somewhere, but without tighter mechanics and a broader set of outcomes, Consortium just sits as a wannabe Mass Effect that doesn't quite understand the difference between a game of Guess Who? and a video game.

The overall sci-fi themes are interesting and might lead somewhere, but without tighter mechanics and a broader set of outcomes, Consortium just sits as a wannabe Mass Effect that doesn’t quite understand the difference between a game of Guess Who? and a video game.