The best way to describe my relationship towards the Grand Strategy genre is "second-hand" fan. Most of my knowledge of it comes from a close friend of mine and my only major time spent with the genre prior to Crusader Kings 3, is about 50 hours spent on Europa Universalis 4. Comparatively, that's hardly anything. Even after that time, I don't feel particularly confident with the game or how it works. With Crusader Kings 2, I almost immediately bounced off it, perhaps due to the intimidation of having to learn a brand new game.

The reason I bring this up is that I've invested less than half the time I spent in Europa Universalis 4 into Crusader Kings 3 and, already, I feel somewhat confident with most of the core mechanics.

There's quite a few reasons for this. Paradox Interactive have seemingly taken extra steps this time around to make learning the game much easier than before. For one, there's actually quite a detailed tutorial to start with, and this will teach you most of the core mechanics seen in-game, from warfare with other rulers to diplomatic matters (such as the new “Hook” system introduced). It also starts you in something of a "tutorial nation", as the ruler of the Petty Kingdom of Munster in Ireland, 1066. This is where the largest chunk of my playtime was dedicated to. The first early advice you’re given when playing as Petty King Murchad of Munster is to create the Kingdom of Ireland. To do this, though, you have to deal with your local neighbours in Ireland with you. 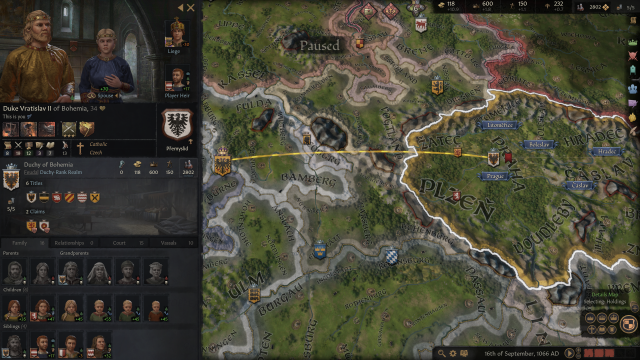 Growing your nation can be achieved a multitude of ways. If you’re smart enough, you can breed into a certain ruler’s dynasty and slowly worm your way into integrating the house into your own Kingdom. However, I’m not very smart, so I stuck to pillaging and spilling blood to gain territory. Warfare in Crusader Kings 3 has a variety of factors to influence it. For instance, a commander with a higher combat skill compared to the opposing side will heavily influence the outcome in that army’s favour. You can even send yourself into battle as a commander if you’re confident enough, though this runs you the risk of getting captured or wounded/killed, which is obviously something of a disadvantage to the rest of your game. (As an aside, dying in Crusader Kings 3 is not the end. If you have an heir, you’ll play as that character.) Also, a factor is the quality of the army you’ve raised, which will be lower if your army is largely levies (farmers and commonfolk). Higher quality armies have more knights and men-at-arms. There are other elements at play, but these are the basics and should serve as sufficient ground rules for the rest of your game.

Compared to Europa Universalis 4, I feel combat is a lot easier to understand. Whilst there’s depth to be explored with the different men-at-arms units that counter each other, it isn’t overbearing and the more complicated parts come into play as the game progresses, so you learn steadily. Most of your time will however be spent with court affairs, of which there’s a lot to process. 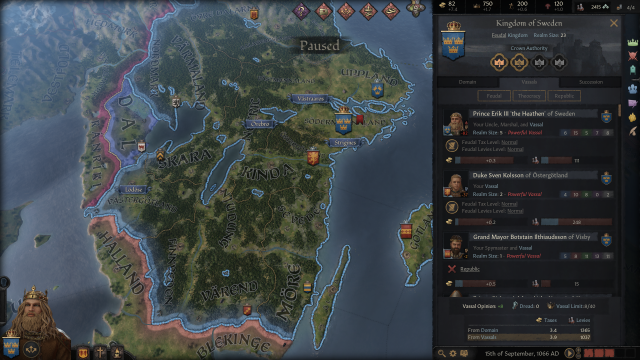 As you don’t solely rule a nation, you have a selection of vassals and underlings that micromanage parts of your country that you must keep an eye on, as well as a council of courtiers that handle different duties of the nation. Selecting your council is largely just a numbers game, as you want the best man/woman for each individual job (a person with low Martial skill for example will be a very poor Marshal). However, powerful vassals will also want spots on your council regardless of their skills, and will have lower opinions of you if you do not let them. This can be mitigated by giving them gifts or swaying them with a personal scheme but it’s important to consider, as vassals with low opinions of you might start a faction against you (and possibly come to blows against you). Low opinions can also be caused by vassals with a different culture or religion than you. You can additionally raise vassals’ opinions of you by holding a feast (or coming to theirs) which will also trigger some interesting random events that might lead to some subplots that might be worth delving into.

Certain random events will lead to ongoing plots that’ll reoccur every once a while. As an example, my character had an excellent horse named “Bucephalus” after Alexander the Great’s equine friend. I had a choice to name that horse and it lasted for a long time until it tragically died after I was lax on treating it medically. You can also have an affair, attempt to murder a rival in secret, and even discover a courtier’s deviancy (and have him banished). These events and relations to other characters is what separates Crusader Kings 3 from Europa Universalis 4, and to me they make the game so much more interesting. They add a unique role-playing element to Crusader Kings 3 and also help to alleviate the boredom in the downtime between wars that was a large barrier to my enjoyment of Europa Universalis 4 at times. I understand these were beloved elements to the game’s predecessor, but as someone new to the series it’s a breath of fresh air. 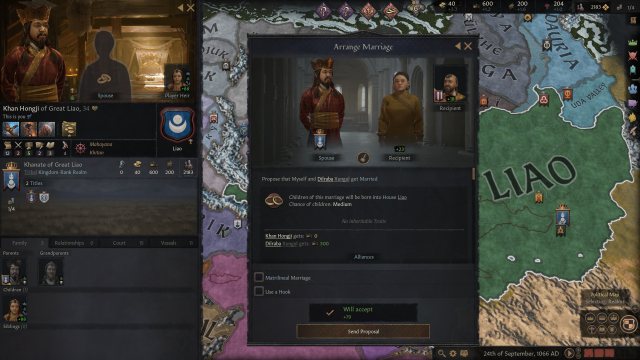 New elements to the game, as well, are the “Hook” and “Stress” systems. Starting with Hooks, this comes into play when a vassal owes you a favour from a certain event and vice versa. What this does for you is allow you leeway to convince said character to do a certain thing, whether it be something as simple as allowing a marriage between families, or raising taxes in their county. Stress is something you accumulate, often from acting against your ruler’s traits or from family members dying. Stress can be relieved in various ways, but if not relieved in time, it can in fact kill you. I didn’t personally find the Stress system to be overly important in the grand scheme of things, but it is an element to mention.

There are two starting dates that you can play from in Crusader Kings 3, 867 and 1066, and you can play any ruler that you wish from either start date. Other than Petty King Murchad, I had a brief go at uniting Spain as Sultan Muhammed of the Umayyad Sultanate in 867. This was interesting, as I felt there were far more options available to me as this ruler when compared to King Murchad. For one, the religious difference between Andalucia, Galicia and Navarra meant I had religious grounds to wage war on entire swathes of Asturias and Navarra and claim large chunks of their territory. The superiority in both army size and nation size meant whilst there was sometimes a struggle when they banded together, I was largely able to win most of my wars. As the Umayyad Sultanate is Islamic, instead of Knights, I recruited Faris. These work identically to Knights aside from the name change, however. A unique end goal to Muslim nations is the final Major Decision to “Dismantle The Papacy” which can only be fulfilled when the entire Italian peninsula is under Muwalladi control. I have yet to do this, but this should serve as an interesting challenge to players that wish to try a Muslim dynasty. Something that’s often overlooked, but also what drew me in immediately, is Crusader Kings 3’s revamped presentation. As well as the pretty art created for the game whilst it loads, there’s a brand new portrait system that’s actually animated and changes in accordance to the character’s age and physical status. You can instantly tell when a character has been injured in battle due to the significant bruises on their face and some can even lose their eye in battle, leading to them having to wear an eyepatch. Your character also visibly grows greyer as they get older, as well, which often works as a human clock that lets you know the stage of life your character is in at just a glance. Each individual culture has their own locale and iconography as well, which can be seen in council screens and menus, as well as clothing. I also feel the menus are far less cluttered than either its predecessor or Europa Universalis 4, and this led to me understanding the game a lot faster.

The only real technical issue I’ve had is that the game takes a very long time to load, sometimes up to five minutes. I’ve no clue as to why this is, though I’ve been told it could be a RAM problem. Regardless, it is an inconvenience and makes it less easy for me to jump into a game on a whim. Crusader Kings 3, like all Grand Strategy games, has a mountain of depth to it, and it’ll be a long while before I master the game (if I ever do). Nevertheless, the time I’ve spent with it thus far has been riveting and I’m excited to continue to experience the game’s many different aspects.

An excellent start for a beginner, and a great delve into the medieval period for history fanatics to boot.