Taito’s Darius is a series responsible for many aspects we now take for granted in the shoot ‘em up genre. It’s also that series with all the fish based enemies with oddball names! Coming out in Japan late last year, the Darius Cozmic Collection has finally been released here in the West. Has it been worth the wait? 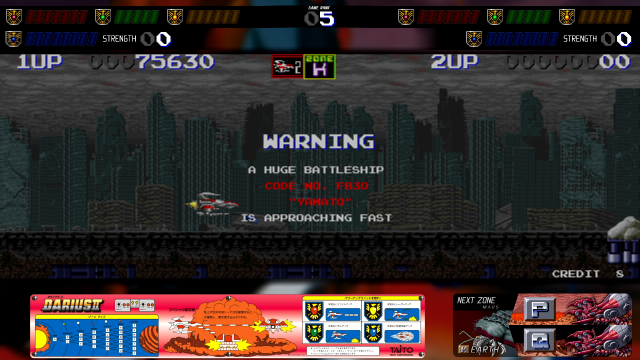 The Darius Cozmic Collection is itself split across two releases, one covering Arcade titles and the other covering Console releases. This review is just covering the Darius Cozmic Collection Arcade version. This includes ports of the original Darius from 1987, Darius II from 1989 and Darius Gaiden from 1994 along with some minor revisions and ports of Sagaia which was the international release of Darius II with some major changes made to it.

The original Darius was an impressive game to witness in the arcade as it utilised three monitors for an incredible wide playing area. It is also incredibly hard due to being particularly unforgiving with its checkpoint based approach to death. Enemies tend to also be quite small which makes the precision needed quite frustrating at times. It did introduce the series power-up system where collecting different coloured orbs upgraded specific aspects of your loadout. 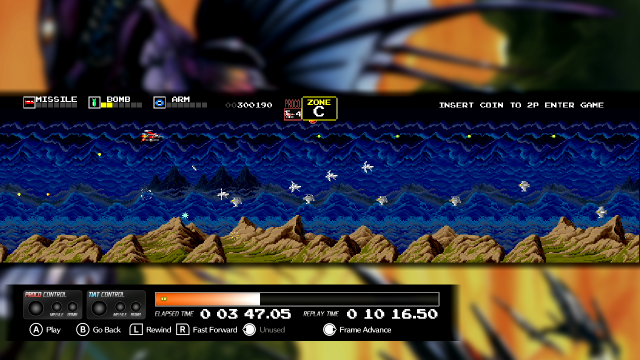 Darius also introduced the concept of non-linear level order which the series has embraced ever since. When you defeat a boss you get to pick one of two paths, with each zone given a letter from A to Z (along with V’ and Z’) for a total of 28 zones although each playthrough can only see seven of them. This gives the game (and the series as a whole) a lot of replayability as there are a lot of combinations and bosses to fight.

Darius II utilised the two monitor arrangement upon release but did see a revision that used three. That revision was intended so arcade owners could upgrade the original cabinet. It is however the two screen variant that has been ported here. Darius II is a lot more approachable than the original, visually there is a bit more going on and the game feels more satisfying to play due to less frustrating enemies. The main new gimmick however was that bosses could change which side of the screen they were on forcing you to change orientation. 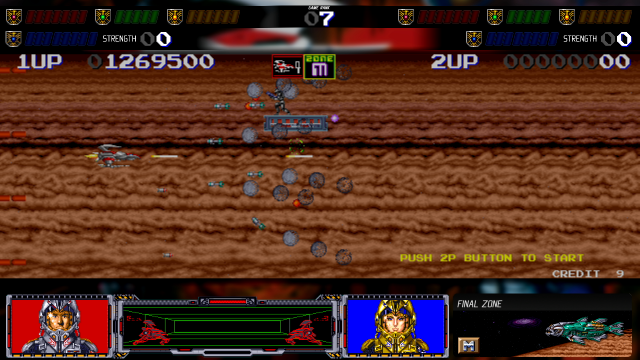 Sagaia is an interesting game, it’s technically a trimmed down version of Darius II with less zones, 16 compared to the original’s 28, but they are also extremely short. On top of that, boss health was lowered. The zones themselves are also remixed and in a different order when compared to Darius II. This was all done to speed up play but it does make it feel like an entirely new game. There are two versions included here with both having different zones and bosses.

Finally we have Darius Gaiden which was originally going to be Darius III, but because of how the story slots between the other two games its name was changed at the last minute. Being the more recent entry here, this is the most visually impressive and easiest to approach Darius in this collection. Don’t let that fool you into thinking it’s a lot easier though as it can be just as punishing. Gameplay wise it adds the ability to capture certain enemies by focussing on the orb attached to them, once captured they then fight alongside you for a brief period. This mechanic would later be improved upon and used in the 3D sequel, G-Darius. Interestingly Gaiden also introduced the “black hole bomb”, essentially a smart bomb as used in many other shoot ‘em ups. Up until now the series had no panic button which is one reason Gaiden feels a lot easier to get into.

So that’s a brief look at each of the games, what about the ports themselves? First off, it’s important to mention that M2 are behind the emulations here and like almost everything they do the actual games run and act flawlessly. There has been a lot of attention paid to accessibility too in the options.

In a similar vein to M2s own Shot Triggers series of ports, there is an abundance of things to tweak here. From being able to set the overall difficulty and customise auto-fire rates to being able to disable the games internal rank system (which is basically an adaptive difficulty system, making the games harder the longer you survive). You can also make use of twelve save states per game, making practicing those punishing segments more bearable. Of course the game also saves replays of your runs you can analyse at your leisure.

On top of this there are a slew of gadgets you can display on-screen that let you see some inner workings, from simple things like your power-up state and the current and upcoming zones, to more intricate elements like showing boss health and weak point status as well as the aforementioned in-game rank. You can make the screen as clean or cluttered as you’d like with information. Presentation-wise it is very polished. M2 gives the usual assortment of visual scaling and filter options here. You can have things pixel-perfect, scaled to fit or just filling the screen with or without a bilinear filter and scanlines. But this leads to the one disappointing element with regards to the original Darius. Due to its extremely wide nature (being displayed across three monitors) it leads to the game taking up a narrow slice of the screen.

None of the display options are ideal here with the Fit to Screen option being the best overall. In docked mode on the Switch this isn’t as big of a deal but playing portably is incredibly tough as it’s so hard to see anything. Now I can’t actually think of a better solution to this as it’s just the nature of how the game is but it does impact playability of the original somewhat.

This issue doesn’t affect any of the other titles in the collection as even Darius II’s dual-screen setup scales really nicely. In fact, it looks positively gorgeous in portable mode with scanlines. This holds true throughout with the whole collection looking and sounding great. There are some nice minor touches too that show M2’s attention to detail like how when you pause you see a zone map including how many power-up pickups are on each stage and how when the music changes, you get a little notification telling you the name of the track that is playing.

Overall the Darius Cozmic Collection Arcade is a fitting tribute to some genre classics. It’s well put together and is a fantastic way to play these games today. Outside of the original Darius’ aspect ratio (which you can’t really do anything about) the main issue is the price. It is a tad on the expensive side considering there are only three titles here (4 if you want to count Sagaia as different to Darius II) and for a casual fan of the genre it’s probably hard to justify. The effort put into the package should be commended however and I can only hope we see a similar package for the 3D Darius titles.

An extremely well put together love letter to a classic series of shoot ‘em ups. Darius Cozmic Collection Arcade reminds us how brutal games used to be whilst allowing newcomers in gently. A tad expensive but polished to a sheen. 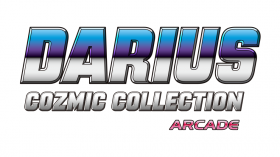