The Darius series has a long-running lineage that Taito has been revisiting of late, with last year’s pair of Cozmic Collections releases lovingly bringing the shoot ‘em up classics to modern audiences. DariusBurst: Another Chronicle EX+ focuses on doing the same for the most recent entry in the series. 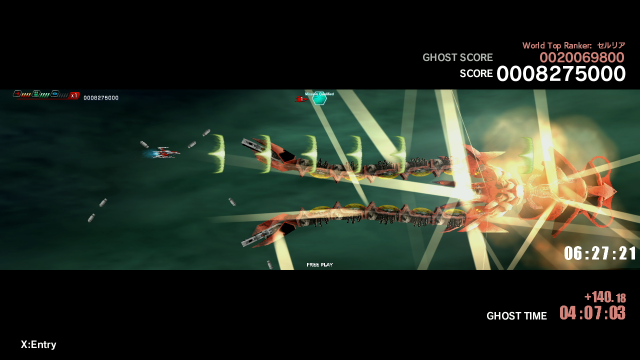 Another Chronicle EX+ takes us back to the Darius universe where the population of planet Darius is still under attack by the fish-themed Belsar Army. Like other games in the series you’ll progress through a variety of horizontally scrolling stages that let you choose your path as you go. This version of the game is fundamentally the arcade version of Another Chronicle EX and includes all the modes from that release including Event Mode which has never been featured in other home releases. 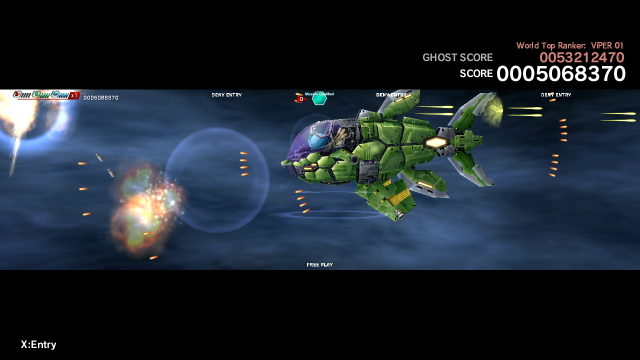 Event Mode features unique challenges which were time-limited in the arcade with all 13 included here along with a further eight completely original ones specifically for EX+. This is wonderful to finally see, both to actually get to play these but also from a preservation point of view. Ultimately though it’s a relatively small chunk of a much larger whole.

This mode is joined by Original Mode, Original EX Mode and Chronicle Mode. Original mode is the arcade experience sending you through three stages out of 12 with branching paths after each stage. Original EX is a variation with remixed levels and new bosses with a bump to difficulty. Finally, Chronicle throws you into a star system map filled with planets to liberate and is the main meat of the package with literally thousands of challenges which are unlocked as a community.

This is a vast amount of content and is hours upon hours of horizontal aquatic-themed shooting action. For fans of the series or shoot ’em ups in general there is a lot to get stuck into here and the gameplay is stellar. If you’ve ever played a Darius game before you know what to expect, with challenging stages full of great visuals and wonderfully designed bosses that look stunning and like to throw a lot of bullets at your ship. 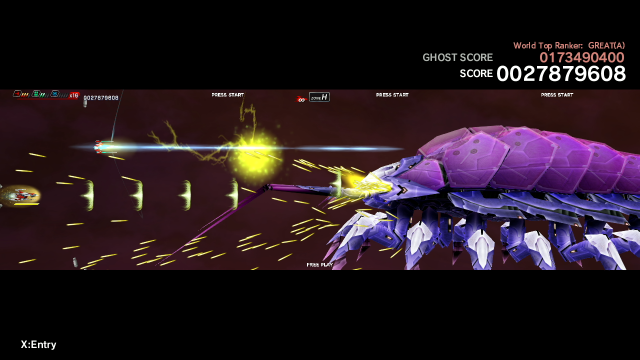 Speaking of ships, there are eight returning from Another Chronicle EX which each have unique combat mechanics. Mixing and matching support drones and beam types to change up how you approach stages. EX+ also brings the Murakumo ship from 2015’s DariusBurst: Chronicle Saviours which has a unique mechanic involving it having more drones active based on its charge level which you can reposition in various formations.

Chronicle Saviours is the game I alluded to earlier and released on the PlayStation 4, PlayStation Vita and PC, it also included a solid port of all the content in this release except for the Event Mode but critically it included its titular Chronicle Saviours (or CS) mode which had hundreds of stages that took you through Darius’ history. The CS mode was also tailored for home release making better use of a single screen.

The existence of Chronicle Saviours makes the PlayStation 4 version of Another Chronicle EX+ feel a bit odd. Outside of the Event mode the older game has more to offer in terms of content so it’s hard to recommend to all but the most ardent of Darius fans (or for some reason you can’t find or buy Chronicle Saviours). For Nintendo Switch owners EX+ is the only version of DariusBurst so this issue doesn’t exist. DariusBurst Another Chronicle EX+ is a fantastic port of a great entry in the series and is well worth your time, especially if you are a Switch owner. Finally having the time-limited Event Mode available is great but it is curious why Taito didn’t go the extra mile and include the content from Chronicle Saviours to make this the definitive version of the game.

They backported the Murakumo ship from that game into this port so they didn’t forget it exists which makes it all a little baffling. On its own merits, this version of the game is fantastic, it’s gorgeous to look at, the soundtrack is still amazing, it plays exceptionally well and will keep you busy for many, many hours.

It’s easy to recommend to anyone who owns a Switch, but the weird content overlap between this and the prior release on PS4 makes it a more individual decision on that platform. Does the chance to play the previously unavailable Event Mode stages along with the ability to use the previously CS mode exclusive ship in other modes warrant a purchase if you own Chronicle Saviours already?

A great port of a great title that’s well worth the investment on Switch, on PS4 however unless you are a Darius superfan you’d be better served with a copy of Chronicle Saviours.