Steam fairly recently updated their library features, and when the update went out to everyone I found something that shouldn't be there. You see, Dead or Alive Xtreme Venus Vacation is unavailable in Europe and America. I haven't checked every location via VPN, but from what I can tell it's only available in certain Asian countries. However, post-update, there it was sitting in my library just the same as if I’d bought it. After asking around, it appeared to be only me who had acquired this "forbidden" fruit.

So, of course, I installed it and decided to review it. After all, during my research I discovered that you can trick Steam into allowing you to add it to your library, and it wouldn’t lead to a ban. It involves a VPN and if you can do an internet search for this game's Steam community guides you're halfway there.

But what is Dead or Alive Xtreme Venus Vacation? Unlike the main series, it involves no combat. And unlike the Xtreme spin-off series it doesn't include any men. 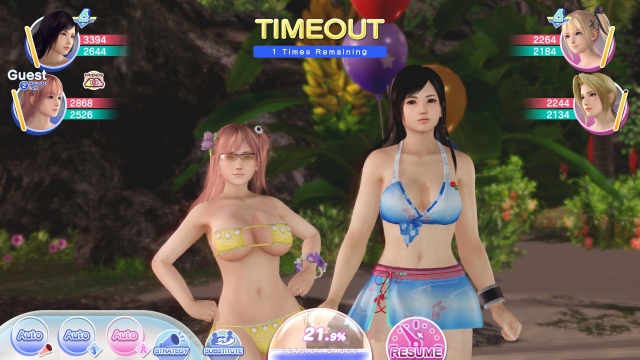 Venus Vacation sees you taking charge of an island which hosts an endless stream of volleyball tournaments, called festivals. The players of said festivals are the women from the Dead or Alive franchise, who are getting along with each other splendidly. There's no log rolling, no trying to knock each other off of a float with their bums, and no player control.

As the person in charge, you don't get to participate in the fun, you just get to watch, though you can choose tactics and make substitutions during timeouts. Oh, and you can pause so that you can take photos of course, maneuvering the camera wherever you please.

Outside of volleyball, you can take photos pretty much anywhere and anytime. That’s the main point of this game, and after almost a dozen hours of playing, I’ve learnt that fact well and truly. Sure, due to the vast amount of loading times, it’s probably closer to 10 hours of actual “play”, but still. There are plenty of festivals to participate in, as well as weekly event festivals, so there is a lot of time that you can spend in the game, but if you hate mobile “gacha” games then you’re going to really hate this. Venus Vacation lives for timers, and that starts with the daily free random swimsuit that you can get after 7pm GMT. When they’re not playing volleyball, you can set two women to do a job, which takes from 10 minutes up to 20 hours depending on which you choose. They can still participate in festivals, so don’t worry there. This gives the pair points towards their closeness meter, and as it reaches certain levels it unlocks shared poses for them to take while you photograph them, as well as memories. Memories are short scenes where the woman talks to you and you respond with something complimentary or perverted - you have no choice in the matter. Once you’ve unlocked a third character you can start sending them for lessons - which does prevent them from entering festivals. This gives them experience points, allowing them to level up more quickly. Or less quickly, depending on how you look at it.

Festival Points (FP) - the things you need to use to participate in festivals - are the main thing on a timer that you’re going to be worrying about. You generate one FP every 10 minutes or so, and the maximum amount you can have increases as your Owner Level goes up. Each festival uses a different amount of FP, usually more than 10, so you can only participate in five or six matches before you run out. Even fewer when you’re just starting out. You can use one FP potion per day (more in the Japan-only, non-Steam version) to refill your FP, of course, but then you’re left waiting again.

Experience points in Venus Vacation are also gained through volleyball, but you’ll get more from giving your girls gifts. Mainly food items, but you can also give them swimsuits - each character has a style they love and one they hate. For instance, don’t give Misaki revealing costumes, she hates them! Another gift is melons, which unlocks a “mini-game” where you watch the blindfolded lass stagger across the beach with a stick before hitting a melon, awarding you an item. Oh, and you can of course photograph them, as well as poke them in the boobs, bum or head - just as you can in any non-volleyball screen. Levelling up will increase their stats, but also unlock new places that you can pose each lady to take photos. 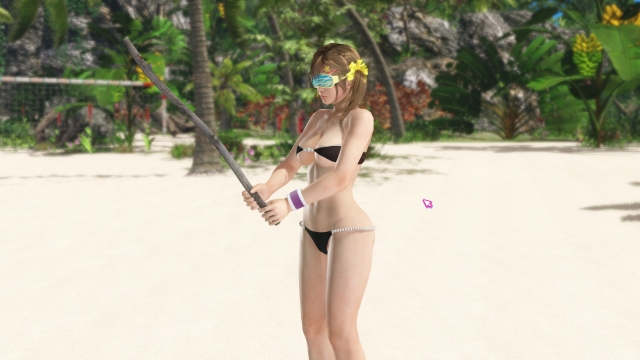 Since you can get experience in other ways, the main reason to actually play volleyball is to get V-stones (the premium currency, which has a paid & free version) to get more swimsuits, and to unlock gravures. These are scenes where the lucky member of the fairer sex will do something for about a minute while you watch or take photos - lounge on a sunchair, swing on a rope swing, that sort of thing.

Oh, and because I can’t think of anywhere else to mention this, when you use a voucher or V-stones to unlock a new swimsuit, your chosen lady comes bouncing along wearing what you’ve unlocked. There’s also a chance you’ll be treated to a fully rendered cutscene of one of the characters in the shower, if it’s a special swimsuit - steam, plants and hands cover naughty bits. You can also get hairbands, hair clips, bracelets and glasses to customise (and slightly enhance the stats of) your team. I’ve also read about events that give you items to soften or firm up their breasts and backsides!

There’s not an awful lot more that I can say about Venus Vacation. It’s a nice looking game, with reactive physics and cute outfits. There are some songs that get incredibly repetitive because they only run for a couple of minutes, and there’s only a handful of them. The voice actors are great, though obviously it’s all in Japanese so you will miss anything not subtitled unless you understand the language. Dead or Alive Xtreme Venus Vacation knows what it wants to be and revels in it. Yes, it’s pretty unsavoury as you’re watching ladies playing volleyball in dozens of swimsuits and underpants, with breast physics, but it’s clear that’s all it wanted to be. However, I’m scoring it on the fact that it’s a videogame, and not just on the fact that it’s well put together, so on that point it fails. It’s not a game about photography - your only options are to move the camera, swing a fan to move the women’s hair and breasts (and some swimsuit parts).

Dead or Alive Xtreme Venus Vacation is the mobile game you keep meaning to get back into playing - but have decided to just do the daily stuff until you get the time. Except it isn’t on mobile, and it isn’t a game.