Deadbeat Heroes is a fast-paced, superhero, brawler with more class than a royal at the Ascot Racecourse. The game is part of the Square Enix Collective, an initiative that allows game developers to pitch ideas to the community who then vote for their favourites and offer feedback. Deadbeat Productions are one of the lucky few developers to have their title published by Square Enix after receiving a positive view from the community.

Supervillains have taken over 1970’s London and with no heroes in sight, it falls to a small group known as the Deadbeat Heroes to save the day. Armed with sassy one-liners and rocket-propelled power gloves, it's time to clean up the streets. Starting the game in a dingy little hideout I quickly became acquainted with Captain Justice, a wise cracking superhero in a cape and spandex that serves as the tutorial guide and a sort of narrator between missions. The hideout is the central hub for the player to initiate missions by answering the classic red flashing telephone (A nice callback to the 60s Batman TV show), practice new abilities in the training room, switch characters and upgrade the power glove.

Jumping straight into the training room I found the controls to be very fluid and offer a lot of mobility. Being able to switch from wall running, to a diving attack, to a dodge and then back to playing offensively is very satisfying. However, combat against enemies is very jittery because goons will fall into a stunned state after being hit. While stunned enemies are immune to damage (except for area of effect damage) which means trying to string together combos becomes difficult. I have only managed to land two blows on a single target before they become immune to my punches. This means the combat becomes a start and stop affair, blitz around the environment and hit individual targets, then wait for one to get back up so you can knock them back down again, repeat. This makes the combat a little counter-intuitive which is frustrating as the controls allow for a much more dynamic combat experience. 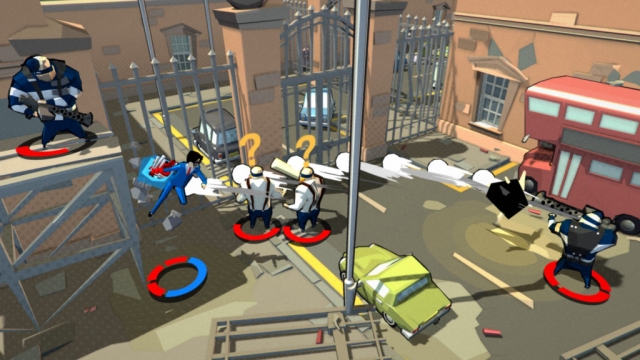 I was hoping that unlocking new abilities would solve the flow of combat but each new ability unlocked felt very lackluster and was nothing more than a variant of an already existing basic attack. For example, unlocking the uppercut ability requires me to stand still and tap punch, this sends a goon flying directly upwards but since juggling is not a feature it becomes redundant as I might as well just move and use a basic attack to knock them down because this doesn’t require me to stop and position myself. The most dynamic ability is the power attack that requires the special gauge to be full. Filling the gauge is a simple case of attacking enemies and collecting orbs that they have dropped. Once full, the power attack will deal immense damage to enemies and results in a close-up snapshot moment of the knockout punch which is incredibly satisfying to watch.

Despite the problems with the combat, it is still made fun by the many different enemy types available. These enemy types can be broken down into three categories; Goons, Henchmen and Super Villains. Goons are the generic bruisers that can be beaten with a few hits, wielding bats, handguns, shotguns and machine guns. They are easy to defeat but need to be beaten quickly to avoid being swarmed. Henchmen are a little tougher and will block attacks and require a power attack to knock them down. Once downed, the Henchman will drop a copy of the power they are using. New powers are introduced after each new Supervillain is defeated and offer a replacement to the power attack which provides a new dynamic to the combat. Some of these powers are: Explosive(creates an explosion around the player). Ice (freezes enemies and environmental hazards to make them less dangerous), and Invisibility (causes enemies to become confused and drop their guard, making for an easy knockdown attack). Supervillains are the boss enemies that appear every three missions and are extra tough, requiring several power attacks to defeat. I was disappointed to find that the Supervillains are essentially the same as Henchmen but just with a little more health. Considering that during after each mission there is a short story segment introducing each Supervillain that creates a build-up to what should be an epic fight only to have it fall flat with no new mechanics or approach to each boss. 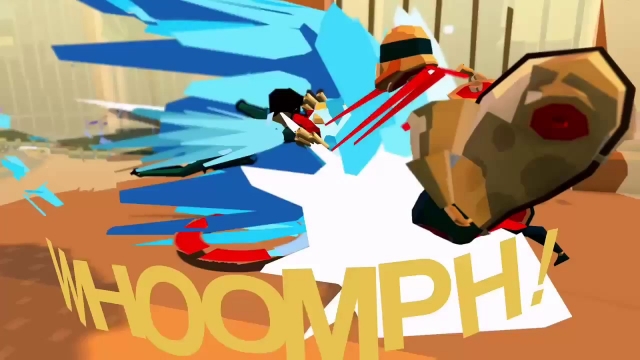 New playable characters are slowly introduced after the first two Supervillains are defeated. I had hoped that these new characters would come with their own unique abilities, unfortunately they all wield the same power glove. While these characters are fully voiced and have their own personality, they become little more than a skin swap.

Deadbeat Heroes’ writing and voice acting is funny and clever, however, it suffers from trying too hard to be funny at times. By throwing in that one extra joke or additional pun too many, the dialogue sections can become grating after a short period of play. Additionally, many of the jokes are centered around British culture and for those that have a limited understanding, especially of London culture, they might find most of the punchlines going over their heads.

The visual style for Deadbeat Heroes is executed fantastically, featuring bright colours that are reminiscent of Golden Age comic books with exaggerated animations and comic book style effects, this title is a pleasure to view. Each area represents a real location in London and while the visual style is a loose depiction of what the real locations look like (I’m looking at you Camden Town) they are well put together and offer a good variety of environments.

Deadbeat Heroes is a solid brawler with good humour and a well-directed art style. While the execution of some of the combat elements interrupt the flow of said combat it is still a fun game to play. With a small degree of tweaking to the combat mechanics, this title could go from being an average brawler to an amazing one. The developers are supporting the game and recently released a patch in direct response to player feedback, so my fingers are crossed that they will continue to support the game and make Deadbeat Heroes a title worth remembering.

Deadbeat Heroes is a solid brawler with good humour and a well-directed art style. While the execution of some of the combat elements interrupt the flow of said combat it is still a fun game to play. With a small degree of tweaking to the combat mechanics, this title could go from being an average brawler to an amazing one. The developers are supporting the game and recently released a patch in direct response to player feedback, so my fingers are crossed that they will continue to support the game and make Deadbeat Heroes a title worth remembering.

Really love the visual style of this title, stands out really well.