Derrick the Deathfin is a deceiving game; it has a bright, papercraft art style and a title that wouldn’t go amiss on Cbeebies, giving off the impression that it's a game for kids. In reality, this unique arcade-action title is a fun and challenging experience, albeit one that occasionally frustrates.

The game sees you playing as Derrick, the titular cardboard shark. We are greeted by a cutscene that shows the unfortunate demise of Derrick’s mum and dad at the hands of M.E.A.N., an evil, water-polluting corporation. Being the cold-blooded predator that he is, Derrick sets out to take down the bad guys, destroying everything (and everyone) that gets in his way. 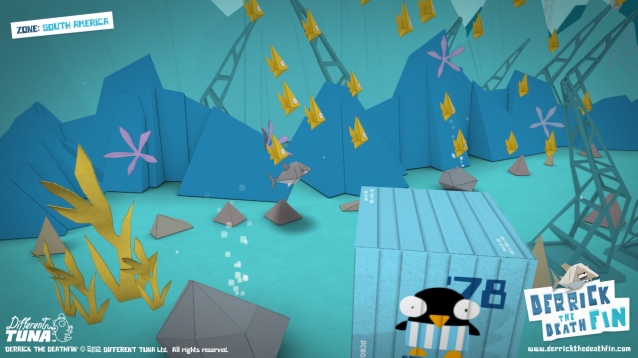 On his quest for revenge, Derrick travels to the waters surrounding each of the world's continents, blowing up oil rigs and cargo ships carrying radioactive waste. You’ll do this in neat physics-based puzzles that pop up once per continent, usually involving headbutting an explosive so that it hits and destroys the construction. There are also a few time trial levels in which you simply have to get to the end as fast as possible. These are great fun and make the most of the game’s responsive mechanics - my only complaint about these levels is that there aren’t enough of them.

Most of the time you’ll be taking on the points-based levels that require you to eat as much as possible. During these levels you'll quickly attempt to stave off Derrick’s insatiable hunger in order to survive, all the while collecting gems and leaping through flaming tyres above the water. ‘Quickly’ is the key word in that sentence, as his constantly-depleting health will go from full to empty in a few seconds if you don’t find any fish, crabs, crocodiles, lobsters or humans for him to snack on.

The strict health limitations mean that you’ll be restarting levels plenty of times as you learn your way through the levels. This is compounded by the fact that some levels are almost labyrinthine in design, and a wrong turn into an area without food will cause you to die and restart the level from scratch. As you might expect, this can be frustrating. Another source of frustration is the bosses that crop up once per continent; these typically see Derrick facing off against another large aquatic creatures such as swordfish and whales. These encounters simply involve attacking the boss’s weak spot while they swim around in a basic pattern. The problem with this is that the game's controls are designed for speed, not precision; the small weak spot must be hit many times and missing it will cause you to die very quickly.

The best comparison I can make to Derrick the Deathfin’s focus on getting the perfect run is something like Joe Danger or Trials. However, the mechanics here are not quite as polished as those two series; our fishy hero dashes and drifts around levels with pace, but navigating tight spaces can be a struggle due to his drifty movement. It makes sense given that you’re playing as aquatic creature, but it can be slightly irritating when you’re rapidly approaching death and can’t get around an obstacle to reach the next food supply.

Getting to grips with the controls doesn’t take long; the left analog stick will make Derrick swim in any direction and holding the right trigger gives him some extra speed, while ‘A’ and ‘B’ respectively cause him to chomp or dash into his prey. After a few minutes I was zipping through levels like nobody’s business, and the basic gameplay loop of racing around levels and eating fish is really satisfying. 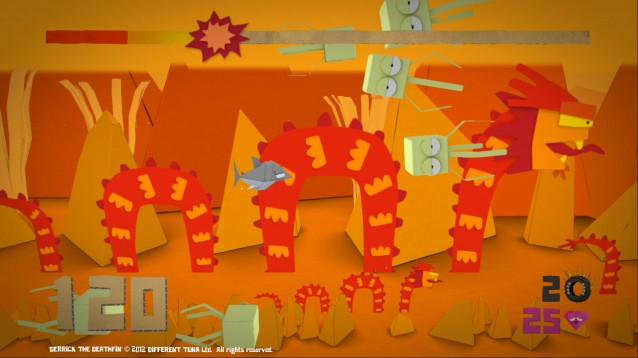 From a presentation standpoint, Derrick the Deathfin is impressive. The game's papercraft style is vibrant and levels are packed with little details that match whatever continent you’re in, like trashed New York subway cars in the Americas (just don’t ask how they ended up at the bottom of the ocean). There’s a decent sense of humour running throughout the game; loading screens are accompanied by amusing tips such as "Cluttering loading screens distracts users", and the game sets a lighthearted tone in general - provided you can ignore the mass killing and wanton destruction.

Derrick the Deathfin is almost a brilliant game. It’s got a decent sense of humour, satisfying gameplay and a charming visual style, but it’s let down by some irritating sections. However, if you can look past these more frustrating moments and a mere three-hour playtime, Derrick the Deathfin offers a fun and unique experience that rewards those who are up for a challenge.

Derrick the Deathfin (Reviewed on Windows)

Derrick the Deathfin is almost a brilliant game. It’s got a charming sense of humour, satisfying gameplay and a great visual style, but it’s let down by some irritating sections. However, if you can look past the game's more frustrating moments, Derrick The Deathfin offers a fun and unique experience that rewards those who are up for a challenge.