It has been 15 years since the original release of Destroy All Humans. In the years that followed, the game received a decent sequel and two, not so great, spin-offs. The series last invaded our homes in 2008, but the spin offs’ poor reception has left the franchise dormant for more than decade. After an almighty wait, Crypto finally makes his long awaited return to planet Earth - and he remains as bloodthirsty as ever. The remake of Destroy All Humans is faithful, rarely straying far from the path that was paved by the original games release. From the dialogue to the level design, this action-adventure is the perfect homage to gaming’s second most renowned space invasion title. Controlling Crypto is a blast, just as it was all those years ago. He has an array of weapons that unlock throughout the opening missions and improve on further throughout the game. His weaponry has remained the same since the original, but with such diversity, adding more would not have benefitted the game in any way. The number of tools at Crypto’s disposal is just enough to keep the player from feeling overburdened. They have, of course, been refined since their first outing and for the most part, everything feels really good to control. Crypto has been modernised in a way that respects the original game. Unfortunately Crypto’s ship hasn’t received that same treatment. Captaining his ship is not awful by any means, it just feels very bland in comparison to controlling the little alien. Much like with Crypto, there are a lot of tools to unlock and upgrade for his saucer, yet you struggle to feel the impact of the destruction you are causing. On foot, Crypto is unhinged, hilarious and relentless fun. As soon as he is in the spaceship, he begins to feel like a caged animal. The destruction of cities feels like pushing a Jenga tower over on cotton wool.

In fairness, I always thought the original game was a lot more engaging when playing as Crypto and leaving the saucer behind. In that regard, it is a faithful adaptation. That faithfulness is applicable through the spine of the entire remake. Storywise, Destroy All Humans has been recreated scene-for-scene, even remastering the dialogue originally used. It is a modernised carbon-copy of a cult classic. At times it feels like things were played safe, but loyal fans will be pleased at how committed Black Forest Games were to giving players a real Destroy All Humans experience. Given how wayward the series became with its spin-offs, using the foundations built by the original is not a problem at all. It helps that the PlayStation 2 version of Destroy All Humans holds up quite well today and the smart gameplay refinements has ensured that both new and old players can enjoy this reimagining. At times, there is an over reliance on forced-stealth and escort missions. Those slower paced missions are bound to frustrate some players, especially towards the end of the campaign when Crypto is at his most powerful. 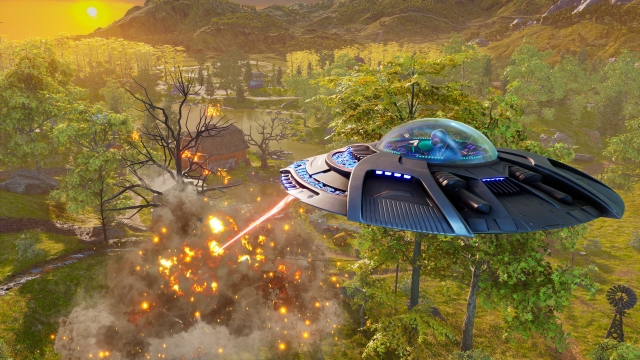 Visually there have been clear enhancements, which is to be expected. After a 15 year wait, Destroy All Humans looks fantastic, without any sacrifice to the original aesthetic. It still calls back to old school sci-fi horror, both in city design and its splash screens. Magnifying the original’s parody of 1950s America and its fear of the unknown. Crypto and Pox also maintain their original design, with Crypto’s snarl looking especially dashing in the game's visual overhaul. The game looks and sounds great, with the current generation of hardware really giving Crypto’s destructive tendencies the chance to shine. A great deal of effort was clearly invested in making Crypto’s catalogue of tools sound hilarious and look devastating.

The story of Destroy All Humans isn’t long, taking around five-to-six hours depending on how much time you commit to each mission's optional objective. You can go back and replay any missions you have already completed, so there’s no rush in getting the optional stuff the first time around. Although the game's length may seem short for some people (especially considering the £25 price tag), it does feel like an adequate length for a story so committed to humour. Any longer than six hours and Destroy All Humans would run the risk of overstaying its welcome. As a plus, there is a lot of replayability outside of completing the game's story. Aside from the aforementioned optional objectives that our completionists friends can enjoy, each level you unlock throughout the story can be played in a sandbox mode. This allows the user to destroy the towns, complete objectives or simply run amok as an angry little alien.

Fans of the original Destroy All Humans will be delighted with this remake. The game's comedy hits the mark and, despite lackluster saucer gameplay, there will be hours of fun to find in Destroy All Humans. Importantly, there is a lot in here for newer fans to enjoy too, and missing out on the games original release in 2005 is not going to hinder your enjoyment of it. Yes, the game plays it safe at times, but that proves just how timeless this classic is.

Destroy All Humans! (Reviewed on Windows)

Destroy All Humans is a fantastic, faithful experience. Both older fans and new fans will find a lot of enjoyment here and hopefully we will see a lot more of Crypto’s antics going into the new generation.

Happy to hear this remake came out great. Loved this game back when it released and can't wait to jump back in with those new graphics!!

Glad they kept Crypto's 'Jack Nicholson' voice... It  just wouldn't have been the same with a recast.