Developers Bioware are known by most gamers nowadays thanks to their critically acclaimed action-RPG, Mass Effect; but before that, they were known as the creators of the seminal c-RPG series Neverwinter Nights and Baldur's Gate, among others. Dragon Age is the ‘spiritual sequel' to Baldur's Gate, but is it as grand as its predecessor or have Bioware missed the mark?
People may be getting sick of levelling up these days; it seems every game has some sort of levelling system in place, but Dragon Age is one of those RPG's where it actually makes sense - growing more powerful as the game progresses and learning new skills. While DA: O may have lost the Dungeons and Dragons rules Baldur's Gate was played by, but it retains most of Bioware's key charms: solid, likeable characters, a well told story and if you play on a high enough difficulty - plenty of challenge. 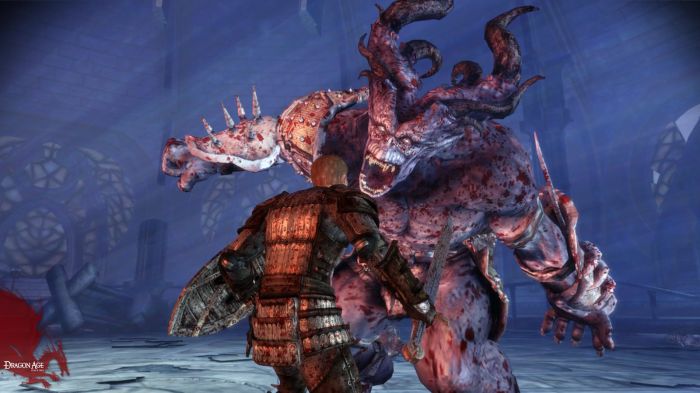 When you begin you will create your character which will serve as your avatar for the duration - this is more than simply designing a face though; you must choose from three different races - Human, Elven or Dwarf - and from here, select a sub-class from either Warrior, Mage or Rogue. Once you have chosen and designed your character (which PC gamers have been able to do from before the games release, with the character creator), you are off to start your adventure. 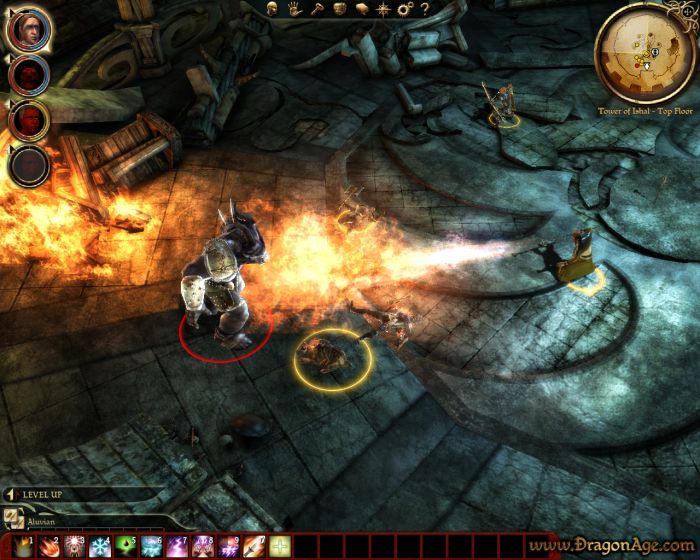 Depending on which race you chose, you will start the game in a different way - hence the ‘Origins' of the title. As an example, if you chose to be a Human, you will begin as a noble living in a castle, with orders to look after the place while your father and brother go to war. I won't spoil anymore after that, as the origins can last upwards of a couple of hours if you take your time, but all origin stories meet up at the same point - you will be taken to a town called Ostagar, by a warrior known as Duncan, a Grey Warden. The Grey Wardens are warriors of legend who protected the world from the Blight, which is happening right now and you are taken to Ostagar to become a Grey Warden yourself. 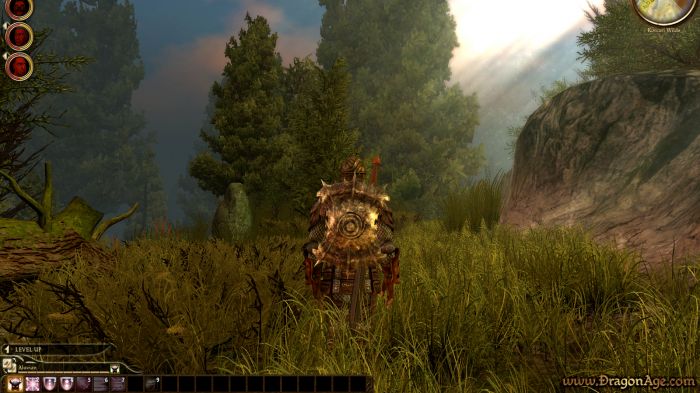 Once in Ostagar, you will be introduced to one of your party's main-stays, a sarcastic Templar, called Alastair. Alastair will remind some of another character from Bioware, notably Carth Onassi from Star Wars: Knights of the Old Republic. Before the initiation for the Grey Wardens can take place, you, Alastair and another couple of would-be recruits have to undertake a task for Duncan. Once this is completed, you will be playing through a main story-event in the game, after which you will finally be given some freedom with your partying and adventuring.

You'll find yourself in a town called Lothering, which is where the game comes into its own after a painfully linear start. Once you've got full control of what's going on, you'll realise that you've got an enjoyable RPG experience on your hands. You will start to find assorted quests littered about and you can really start to hone your skills in combat. The games combat is handled either in real-time, or a pause-and-play way, where you will pause the game; give your characters orders, then resume the game to see those orders carried out. If playing on a higher difficulty level, pausing will be essential to progress. 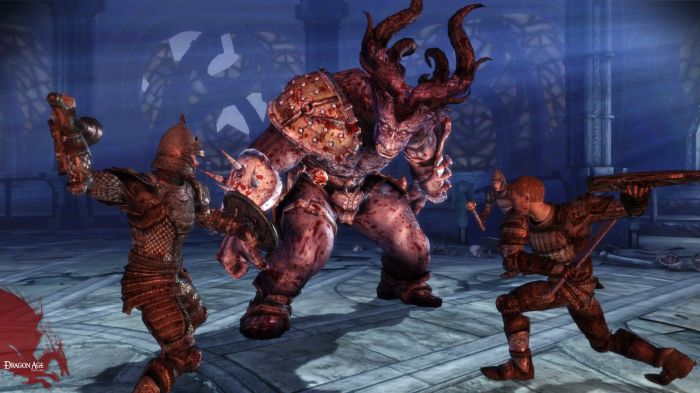 The battles in DA: O are two worlds apart depending on which difficulty you're playing on. Playing through on easy will be just as it says on the tin; you'll hammer through it as fast as you would hope to, but step up to normal (or all the way up to nightmare, if you're a glutton for punishment like myself) and you'll have to start making adequate use of the games pause function, as well as skills like Herbalism which allows you to create potions and such from ingredients without the need for a shop or town.

Along with combat, the main focus of Bioware games tends to be story and characterisation. While the plot is pretty standard fare - i.e. save the world from an evil invasion with your motley crew of adventurers - the characters that appear throughout the game, particularly Alastair and the unpredictable witch, Morrigan, are brilliantly characterised. Alastair is as sarcastic as they come, but humble and sensitive, while Morrigan is his antithesis, constantly exchanging snarky dialogue with the Templar. 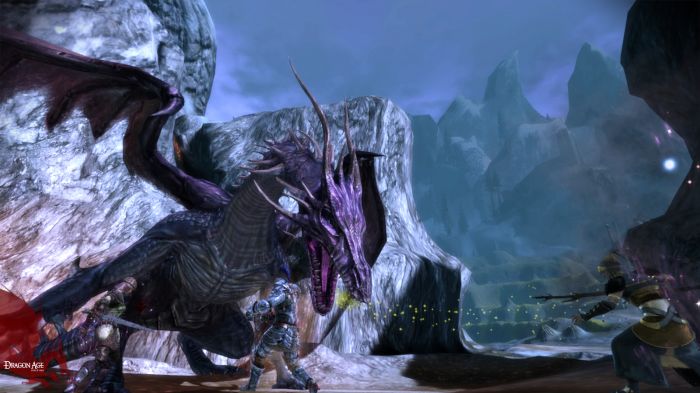 Of course you'll be wondering what your quest is; over the game you will be fighting to save the land of Ferelden from a threat known as the Blight, where an army of creatures known as the Darkspawn come in great number to try and tear up your world. There are many extra bits and pieces to it, but these are best discovered by yourself, which will happen steadily as you progress through the game.

The game is not a graphical powerhouse by any means, but it does have some great character models; though the lip-synching can be terribly off at times. The world itself looks as you would expect in a fantasy title, Elves live in forests, Dwarves underground and Humans generally have the run of the outside world, but all these places are filled with brilliant little details and the games extensive collection of lore really helps to fill out the world and its intricacies. 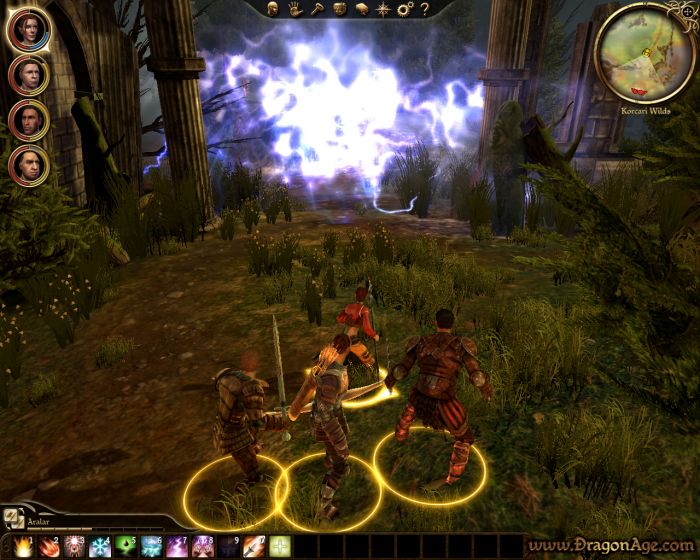 You'll be looking at putting at least fifty hours into Dragon Age on your first run through, possibly a little less on a second playthrough since you'll know where to go and what you're to do, and the game has tremendous replay value thanks to the different classes and sub-classes available for you to toy about with. The game really opens up after the first three or four hours so I would recommend not judging too harshly until that point if you're not a seasoned RPG player.

As previously mentioned, the classes in the game each have four sub-classes to choose from when you reach level seven. As an example, if you choose a Warrior as your player character, come level seven you will be able to become a Berserker or a Templar if you so choose. Each sub-class must be ‘learned' by different means, for example one could become a Templar if they are friendly enough with Alastair, who will teach you to become one yourself.
Most side quests in the game are repetitive ‘go here, kill that' fare, but some main characters have their own personal side quests which are particularly good, for example if you give Morrigan her mothers' Tome, this will spark her interest in her mother's somewhat shady past, which you will then learn about. 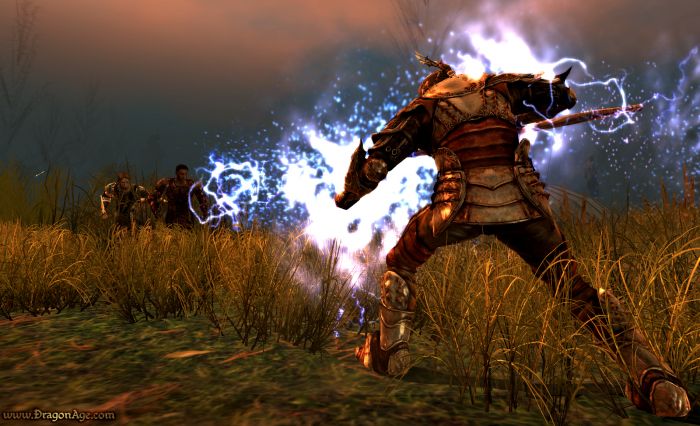 The game was pitched early on as being a ‘mature' RPG, and it's true this isn't one for the children. The game contains sex-scenes and lots and lots of blood. The maturity is, however, somewhat undermined by its own attempts. The blood spatters that appear on you characters as you battle the Darkspawn can look almost cartoony in their appearance, which can really take away from a particularly serious story moment right after a battle (however these spatters can be turned off in the options).

Dragon Age: Origins has its share of fantastic moments, but there's not really enough unique ones, which serves as a problem as this may detract you from a second playthrough. Each of the origins stories are worth playing through, but not necessarily an entire playthrough of the game each time. It may not be as enthralling as Baldur's Gate was (and still is) and it may not be particularly original. It does have its issues, but Dragon Age is a solid RPG experience for those willing to brave the first few hours. Not their best, but a brilliant addition to Bioware's creations none the less.

Developers Bioware are known by most gamers nowadays thanks to their critically acclaimed action-RPG, Mass Effect; but before that, they were known as the creators of the seminal c-RPG series Neverwinter Nights and Baldur's Gate, among others. Dragon Age is the ‘spiritual sequel' to Baldur's Gate, but is it as grand as its predecessor or have Bioware missed the mark?