Chances are if you play JRPGs then you will have heard of Compile Heart and their parent company Idea Factory, the prolific developer and publisher combo responsible for the Hyperdimension Neptunia games. Given the speed at which new games are released it’s not uncommon for many of the games these companies put out to look and play similarly, with many of the games being turn-based RPGs in an anime style, littered with fanservice.

While it isn’t uncommon for games in the same series to share likenesses, the Tales Of or Ys games spring to mind here, most of Compile Heart’s back catalogue could be mistaken for one single franchise. So when most of the games look almost identical you’d expect the emphasis of difference to be on gameplay, something that has always been hit and miss from this company - either adding far too much and over complicating things, or far too little and leaving the game feeling stale.. 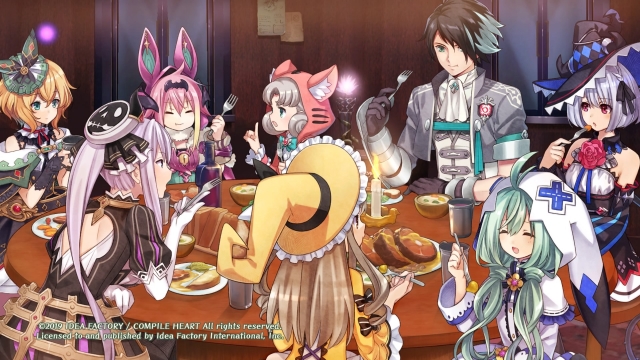 Dragon Star Varnir starts off as a very typical, by-the-numbers, turn-based JRPG. You have the world map as a list of locations, town or dungeon, and selecting one takes you to that place. Towns lack an actual explorable map, being represented as a list of facilities instead, whereas dungeons are areas you as the character can move around in. Inside dungeons enemies wander around, waiting to make contact with your character in order to start combat. So far all very typical of Compile Heart. This doesn’t mean you should write off Dragon Star Varnir as another reskinned experience not worthy of your attention, far from it, it’s the little details and twisted story that make this game truly enjoyable. It’s like comparing a cappuccino to a plain black coffee, essentially its the same thing, but the small additions make it what it is.

The game starts as Zephy, a knight whose sworn duty it is to kill witches, is separated from his squad and promptly nearly killed by a dragon. Two passing witches defeat said beast and attempt to revive Zephy using magic, intent on using him to negotiate for the return of their friend who the knights had captured. When this fails they decide to try and feed the dying man dragon blood, a curative for witches that shouldn’t work on humans, as a last resort. When the dragons blood not only works but also turns Zephy into a witch himself, he is forced to accompany his saviours when the knights declare him and enemy to be hunted. So begins a quest to return the unfortunate knight to human form once more. 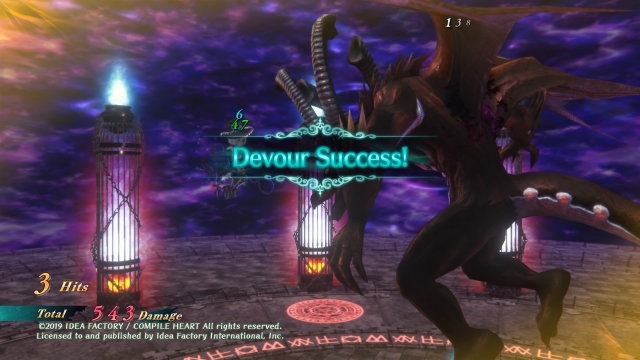 Since witches can fly on brooms combat takes place in the air, spread over three levels of differing height, which enemies and player characters can move between freely. Instead of having one field on the ground, like standard turn-based RPGs have, this stacks three 3x3 grids over one another on each side of the battlefield. This means abilities with an area of effect component have to take this into account. Some skills can hit multiple things on one layer, while some affect things in a stacking column. Making the battlefield 3D has some amusing benefits, the main one being attacks that cause foes to fall down a layer or knock them back a square, making it entirely possible to bowl monsters into each other. The only downside is it can be a bit difficult to select which foe you want to attack, as the select layer and select foe are on thumbstick and d-pad respectively. It can take a little while to get used to manipulating the camera so you can clearly see the monster you want to pick, making it a bit easier.

The rest of the combat mechanics ties directly to the plot. Witches gain their power from the dragon inside them, and have to consume dragon meat and blood to feed it, thus maintaining their power, so it only makes sense that you can eat your enemies in battle, right? If the foe in question is of the dragon family, and most of them are, then when their health is low enough you can devour them and obtain their powers. Every enemy dragon has a ‘core’, which is granted to the character that ate them. Putting focus points, or FP, into these cores increases your stats or teaches you new spells and abilities. Focus points are earned through battle, much like experience points, and unique monsters, like bosses, grant a core to every character regardless. It’s a perfect addition for completionists, with your character’s strength tied to how many different beasties they can consume. 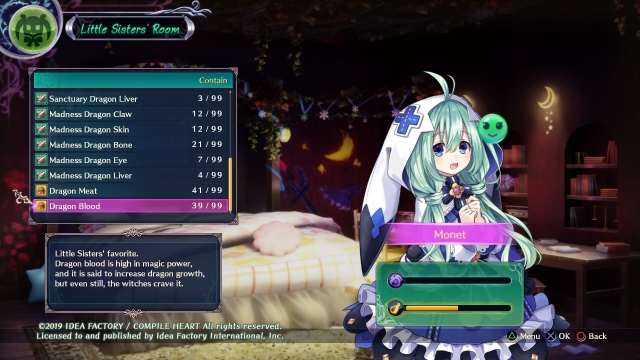 Dragon Star Varnir does it’s very best to make devouring enemies as easy as possible for the player. Normally devouring has a percentage chance to fail depending on how much health the dragon has left, but if the act of devouring, which does damage as well, would kill the enemy then the devour is always successful. This is great for lower level monsters you might come across; despite the devour percentage of success showing as low or even 0, the monster will be eaten if it’s a one shot, saving you from trying to get the monsters health down without killing it.

It’s not just weaklings that the game tries to make easier to eat, there’s also a method to munch down on the powerful ones with ease too, if you can master it. Fear is a status that is built up on a foe as you exploit its weaknesses. Every monster is weak to at least one element, or one attack type - blunt, piercing, or slashing. Hit their weak point at the fear meter will increase. Manage to fill that bar and, as long as it’s not a boss, it will be consumed in a special attack by the person that filled the bar. Even if you kill multiple foes this way through a single ability you will devour them all. As long as you’re smart about what moves you use and who attacks what you should have no hassle taking down any kind of foe. For something that’s so integral to leveling and becoming stronger, it’s refreshing to see how much thought was put into making it an enjoyable and natural feeling part of battle, rather than an annoying addition you are forced to take part in or be underpowered. 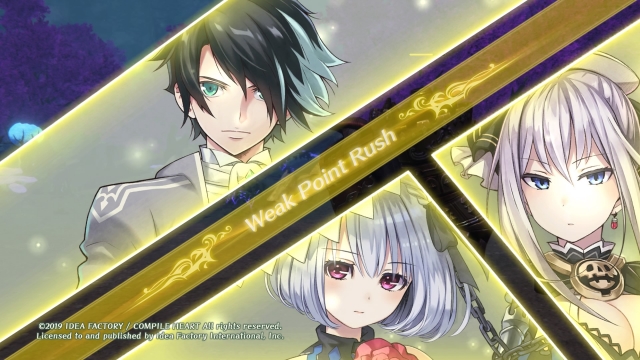 Crafting makes its appearance in the form of elixir mixing. You can use parts of enemies and other items found in dungeons to make potions. These potions don’t serve you in battle, however, but rather are used to access special dragon fights for empowered equipment. For example, dragon claws from the first dungeon can make an elixir that summons monsters from that dungeon, and guarantees they will drop loot of that level for the character that did the summoning. Adding a catalyst that can be bought or found makes the drops more powerful, or forces them to be armour or weapons. The materials aren’t rare, so it’s a great way to gear up a character you might not have had the luck to obtain equipment for. These special fights will never trigger a game over, even if your party is defeated, and instead you will get the potion back and can try again later. These fights even take place in the town menu, so there’s always a save point nearby.

Given that one of the main points of the game centers around eating what you defeat, you may be thinking that the story might be darker than Compile Heart’s usual fare, and you would be right. A witch in Dragon Star Varnir is someone who is born with a dragon inside them. In exchange for eating dragon flesh the witch gains power from their own internal dragon. Eating too little makes the witch go insane as the dragon starves, whereas eating too much makes the dragon too strong and subsequently force its way out of its witch host. It’s a case of delaying the inevitable, as over a witches life the dragon will eventually eat enough to be ‘born’, as the game puts it. It’s a fate nearly all witches fear and is why some of them elect to assist Zephy with curing his condition, hoping that if he can become human again then it may hold the key to saving all witches.

The dragon’s power comes out in battle, with each character having a gauge that fills as combat progresses. When the gauge is full the character it belongs to transforms into a dragon hybrid, with scenes reminiscent of Capcom’s Breath Of Fire. this transformation not only grants increased combat power, but access to a special devour move that does immense amounts of damage, almost guaranteeing you will eat whatever’s hit by it. This serves not only as a very cool mechanic, but also as fanservice due to the forms having incredibly skimpy coverings, but as a constant reminder of the characters possible fates. 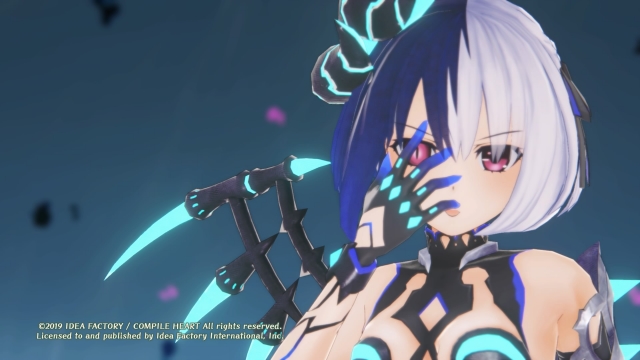 During the game you often be forced to make choices, normally in the form of answering a question, or taking sides in an argument. These choices can affect the party’s overall mental state, and this mental state dictates the story. Too many bad choices can see your party members succumbing to the dragon within, directing you down a story path that ends badly. You can even give your party member’s younger sisters in town dragon meat in exchange for items. Do this too much however and they too will give rise to powerful dragons and die, but do it too little and they go mad. In both cases, your former friends will then wander dungeons as powerful bosses, waiting for you to put them out of their misery.

As stated before, on first glance Dragon Star Varnir may appear to be very typical of its genre. It’s anime based characters appearance, and the game’s overall look, are par for the course when it comes to games by Compile Heart and Idea Factory. Scratch the surface, however, and you’ll find a gem of a game that’s both enjoyable in terms of story and gameplay. There’s enough new features to keep even veterans of the Hyperdimension Neptunia series interested, while at the same time not being too overwhelming and bogged down in different mechanics like Dark Rose Valkyrie ended up being. 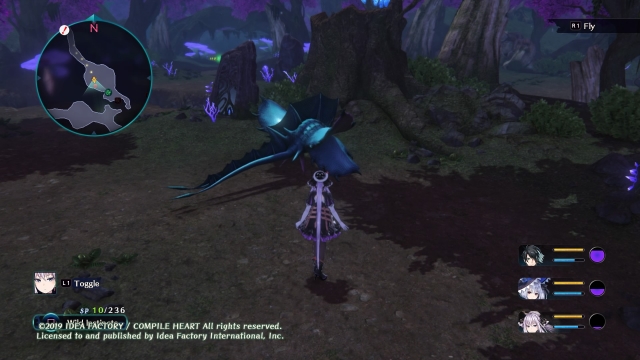 It’s characters are well written, and while some suffer from predictable tropes, not one of them can be written off as genuinely dislikeable. The story stews in themes like cannibalism and death, with blood and gore quite common in cutscenes, but it also has a heart-felt found-family message, with a certain warmth that can be felt even in the darkest of plot paths. If only it did a bit more to stick out from the crowd.

It’s anime based characters appearance, and the game’s overall look, are par for the course when it comes to games by Compile Heart and Idea Factory. Scratch the surface, however, and you’ll find a gem of a game that’s both enjoyable in terms of story and gameplay.

"Oh bugger, that means I have to feed the canibalistic being inside my tummy..." 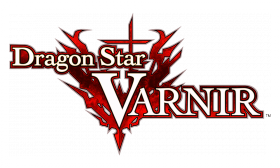