After the surprisingly bleak ending of Drawn to Life: The Next Chapter in 2009, players were sure that the quirky, 'create-your-own' platforming series was finished. For over a decade, they were right; developer 5th Cell went on to continue the Scribblenauts franchise and the delightful world of Drawn to Life receded into obscurity. That is until 2020, when Digital Continue (founded by Joseph Tringali, co-founder of 5th Cell) took the series’ reigns and released Drawn to Life: Two Realms on PC, Switch, iOS and Android. How does it fare? Well, let’s just say that 10-plus years is more than enough time for the cobwebs and rust to build up on Drawn to Life. The formula hasn’t so much matured in that time, more festered. Let’s dig in and pick apart what Drawn to Life: Two Realms has to offer.

It may come as a surprise if your only exposure to Two Worlds comes from screenshots and brief gameplay clips, but the most interesting aspect of this title has nothing to do with its player-created content or even its gameplay. Rather, it’s the game’s story, characters and presentation which make a greater lasting impression. Set a while after 2009’s The Next Chapter, Two Realms returns to the series’ existing characters, serving as a catch-up while providing closure on the cliffhanger presented by the previous game’s conclusion. 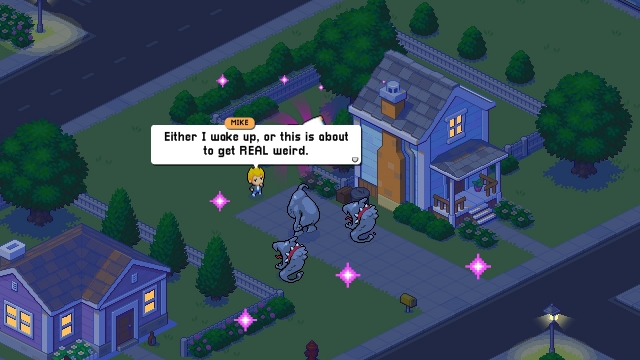 In short, the game presents players with two parallel worlds; one populated by humans (which you’d rightfully recognise as our own world, Earth) and the other populated by a cat-like race known as the Raposa. In previous games, spiky-haired Mike served as the only human character in the Raposa world. Returning to him in this game, he’s back on Earth without memory of his earlier adventures with the Raposa. That’s a real shame. Why? Well because an evil force, led by villain Aldark, threatens to dominate both realms, and only Mike, the Raposa and the player-created hero can stop them.

At the start of the game, you’ll be tasked with creating and naming your own hero with a simple Microsoft Paint-style creation suite. Okay, “suite” might be pushing things. It’s enough to make a decent (or intentionally horrific) looking character if you’re willing to put in the effort, but it’s hardly going to let you create a perfect 1:1 reflection of whatever's in your mind's eye. It’s a way to draw pixel art sprites; if you don’t expect the world of it, it should serve you well enough. You can also change the appearance of your character at any time, and you’ll probably want to, considering that you end up unlocking new stickers, stamps and pre-fabricated costume components over the course of the game. Finally, the creation suite is occasionally used to let players customise certain elements of the game world: shop signs, plot-relevant items, fishing rods and more. 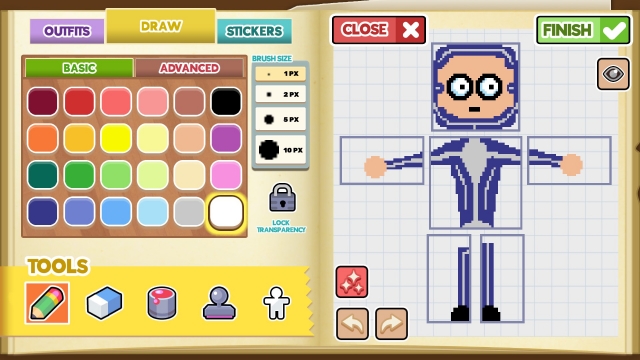 The first time I was asked to make my mark on the game world in this way, I put in a fair amount of effort. The second, third and fourth times, though? Forget it; it made no difference whether I spent hours drawing a pixel-perfect item or just slapped down a scribble. In my defence, I didn’t usually disrespect the game enough to literally draw squiggles in the place of passable in-game objects. More often, I’d just leave the object in its default state. Call me boring, but I haven’t got half an hour to spend designing some cat-person’s fishing rod.

The story has players travelling between both realms, mingling with its residents and helping right wrongs, both big and small, by infiltrating their minds and purging them of the evil corruption that’s taking hold and controlling them (more on that later). These exploration sections are among the game’s best. Roaming is done from an isometric perspective, and the world is portrayed in a simple yet appealing pixel art style. When you combine that with the entertaining—sometimes genuinely funny—dialogue scattered around and music which is far better than you’d ever expect from a game which costs less than a half-decent meal at Nando’s, you’re left with a compelling set of reasons to continue experiencing the world of Drawn to Life: Two Realms. Unfortunately, when it comes time to stop exploring and start tearing into the platforming meat of this game (it is, after all, a platformer), it sinks faster than a battleship made out of worn-out sieves.

Levels are usually framed around the hero using their Book of Imagination to infiltrate a human or Raposa’s mind and clear the evilness that’s wormed its way inside. Sadly, it’s not as exciting as it sounds. As it turns out, the inside of a person’s mind tends to look like a janky, loosely animated Mario Maker level—and not a particularly ambitious one. 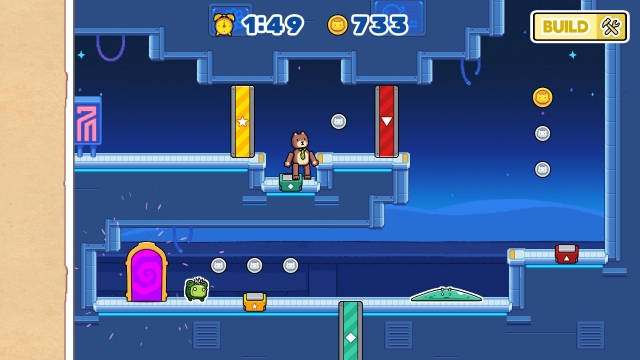 Each level asks the player to, at a minimum, reach the exit. Some have additional requirements like defeating all the enemies, but those are in the minority. Standing in the way of you and your goal are a variety of enemies, spikes, puzzles and obstacles too high to be leaped over without help. If you’ve played a platformer styled after the 2D Mario games, you know what to expect from the lineup of enemies on offer here. Some can be jumped on, others must be approached from the side; there are a few which drop projectiles from up high, and a few of them take off at high speeds when jumped on. The obstacles and puzzle elements, introduced gradually throughout the game, will also be familiar to Mario players. Enemies can be picked up and thrown; destroyable blocks can be stomped on or destroyed by other in-game elements; switches can be activated by either players or enemies; and higher areas can be reached with a variety of bouncy objects as well as a contextual wall-jump ability. 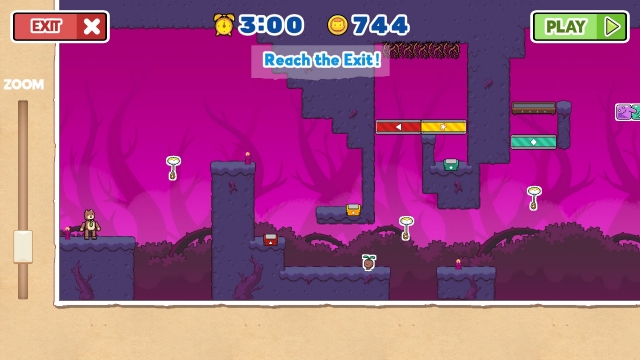 This all sounds very exciting, doesn’t it? On paper, that may be true; in practise, however, the various additional features, enemies and obstacles fail to rectify the core truth that the platforming is just no fun. I’d go as far as to say that it’s downright tedious. Some levels add an additional layer of interactivity by letting the player choose the positioning of the various in-game elements. These are the times where the game comes closest to being… well, fun. Sadly, “close” still isn’t on the mark, and the game felt suffered from being a slog from start to finish.

On top of this, these bite-sized levels are only presented to the player in small batches of three or four, and they really aren’t very long. If you’re buying Drawn to Life: Two Realms wanting to dive into a platforming experience, you’ll be wading through just as much exploring and conversing as you will be jumping and stomping. The exploration may have ended up being the more enjoyable component of the game, but it still feels like padding when the platforming is spread out so thin. 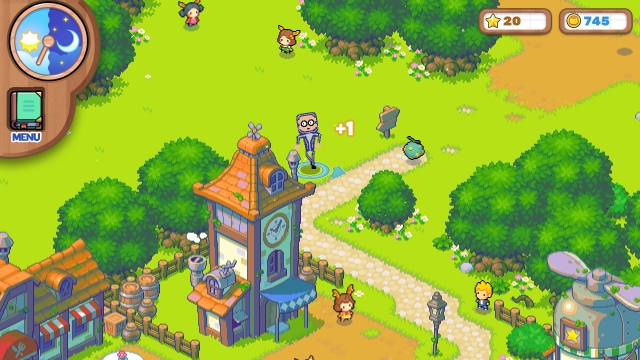 There are certainly things to enjoy with Drawn to Life: Two Realms. The entire presentation of its overworld—combining pixel art graphics, top-notch music and humorous dialogues—makes you really, desperately want to like the game. When it descends into being a 2D platformer, though, the whole thing falls apart. No amount of variety or spicy new gameplay mechanics (which, admittedly, the developer does introduce throughout the story) manage to address the issue that the game just isn’t satisfying and certainly doesn’t feel good to play. It’s not a title devoid of merit, but Drawn to Life: Two Realms isn’t the jolt of electricity needed to shock the franchise back to life.

An enjoyable overworld dragged down by tedious, imprecise platforming gameplay. It’s not devoid of merit, but Drawn To Life: Two Realms isn’t the jolt of electricity needed to shock the franchise back to life.