Warning: This article contains some early-game spoilers for Dreamfall Chapters: The Longest Journey - Book One

In stark contrast to the recent annual releases of major franchises such as Assassin's Creed and Call of Duty, beloved adventure game series The Longest Journey has now returned after an eight-year break. Fans of the series like myself have been itching to play another entry, and now it's finally here. Thankfully, based on the quality of Book One, Dreamfall Chapters is shaping up to be a worthy installment in the series.

For the uninitiated, The Longest Journey is an adventure series set the in parallel worlds of Arcadia (a magical, fantasy realm) and Stark (a dystopian, vision of Earth roughly 200 years in the future). The Longest Journey followed April Ryan, an art student from Stark who discovered she had the ability to move between worlds, and is tasked with restoring their ‘balance’. Its sequel, Dreamfall: The Longest Journey, saw you playing as multiple characters, but the main plot followed Zoë Castillo, whose investigation into the disappearance of her boyfriend leads her down a rabbit hole of conspiracy and intrigue. Having entered a coma at the end of Dreamfall, Chapters opens with Zoë in Dreamtime, an otherworldly realm where she encounters other people who are stuck there due to ‘Dreamachines’ (an addictive lucid dream technology that Zoë failed to prevent being released). Using her dream-controlling powers, Zoë helps these people to escape their nightmares, and eventually finds a way to awaken herself, albeit without any memory of the events leading to her hospitalisation.

To say much more about the events of Book One would spoil it, because the narrative is the main attraction here. Thankfully, that side of the game holds up well. In-game dialogue is extremely well-written, and every character feels like they have their own history and life outside of the plot. It goes a long way to making them feel believable.

This dialogue is convincingly delivered by the game’s voice cast. Zoë, who’s voiced by Charlotte Ritchie of Channel 4 sitcom Fresh Meat fame, is perhaps the star of the show. She brings a slight nervousness and uncertainty to the character which one might expect from someone who's forgotten a chunk of their life, making Zoë feel much more realistic in the process. While the dialogue and acting is top notch, the plot in Book One is slightly underwhelming. The story starts out strong, but it soon devolves into triviality and the ending is a bit of an anticlimax. Along the way, you’ll have to make decisions that vary in significance, from philosophical ones that define Zoë as a person, to dialogue choices that change other characters’ opinions of her.

Each time you're confronted with a big decision, you have the option to view the choices of your fellow Steam or Facebook friends. It’s interesting to see how differently people play, even if, as a result, I mostly found myself being a contrarian. It seems that the consequences of the majority of these choices won’t become clear until later episodes. However, upon speaking to another player I discovered that a seemingly minor choice resulted in one section of the game being quite dramatically different for each of us, so it’s possible that some of my decisions had subtle effects that I didn’t notice.

From the detailed painterly backgrounds of The Longest Journey, to the gorgeous 3D environments of Dreamfall, the series' parallel worlds have always been beautiful, and Chapters is no different; locales and characters are exquisitely rendered in the Unity engine. This time areas are even larger than before, with the main location being Europolis, a sprawling mega-city that makes up most of Europe as we know it today. This huge, grimy, bustling location is packed with details and is a joy to explore. The gameplay in Chapters is a bit of an amalgamation of the first two games, utilising the environmental puzzles of The Longest Journey and the third-person perspective of Dreamfall. The combination isn’t 100% perfect - pixel-hunting becomes much more difficult when a third dimension is thrown in, and I would’ve preferred more challenging puzzles - but overall it’s an improvement on the clunky combat and stealth mechanics of Dreamfall.

It's difficult to pick a score for Book One, because, even more so than other episodic game series, this first installment feels like just one small chapter in a larger story. Still, what the episode lacks in excitement, it makes up for with strong characters and rich, detailed environments. While the tasks you perform in this episode are slightly underwhelming, the decisions are interesting and numerous enough to leave me very excited to play the next installment.

What the episode lacks in excitement, it makes up for with strong characters and rich, detailed environments.

Loved the original, may have a look at this.

If you haven't played it, I'd recommend playing Dreamfall first. It's a bit clunky in places, but worth it for the excellent story. 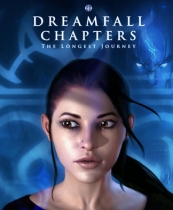