Dungeon Souls is yet another roguelike adventure game that has adopted ‘souls’ into its title. But while the title may not be particularly creative, don’t let that put you off from the game. That isn’t to say that the rest of Dungeon Souls does anything surprising, or subverts expectations in any meaningful way; it’s very much a dungeon crawler at its core. But that doesn’t stop it from being pretty fun.

The beginning of every run has you choose a dead hero for resurrection. At the start of the game, only three classes are available, but six more open up as progress is made, leaving the total at 10. Each class has a diverse playstyle, made even more so by the skills unlockable for every class. Certain skills provide single-target ranged attacks, others allow for powerful AOE attacks, all result in an altered experience depending on which skills are chosen. Going from the melee-focused Barbarian to the Necromancer really does feel different for a couple of runs, but after you get used to the different abilities, all the classes sort of start to blend together.

Once a class is chosen, the player character begins in a very generic dungeon and moves through floors. Movement from floor to floor is achieved by standing on runes etched into the ground to spawn enemies, which then must be killed to progress to the next floor. There are chests to open, containing new items that add stat boosts, and shops to purchase things like health potions. The floor layouts are procedurally-generated, and every few floors a boss is encountered. Clearing a level requires a bit of speed, as an invincible monster known as the Redeemer spawns if the player lingers on one level for too long. 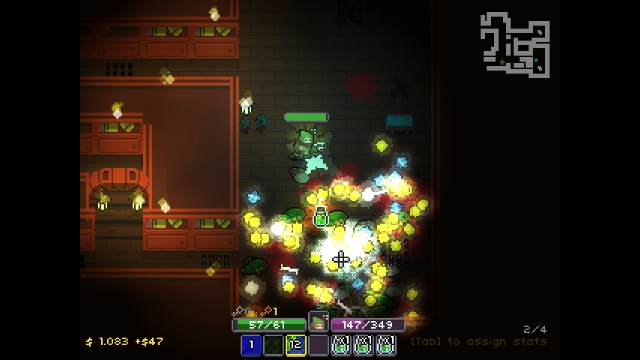 Death comes often and sends you back to the very beginning of a new dungeon. It’s much like Rogue Legacy in that it is not entirely a roguelike, with progression carrying over from run to run in the form of passive permanent stat upgrades that can be purchased. The purchasable upgrades aren’t anything to get excited about, but death can be welcome if you’ve unlocked a new class to try out.

Controlling your character through the dungeon doesn’t take long to pick up, as there isn’t much to really do beyond a few abilities and items to use, but it did take me some time to get a solid grasp of my melee range and the range of my enemies. My swings hit enemies further away than the animation let on, but a few of the dungeon’s denizens had a longer range than I’d have thought.

Local multiplayer may actually be the best way to play Dungeon Souls. I only tried it for about half an hour, but from what I could tell, the experience doesn’t suffer from having an extra player on the screen, and having a helping hand adds a layer to the combat in the later areas that isn’t there when playing alone. 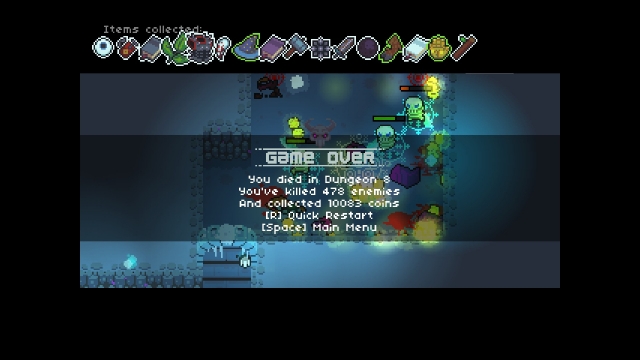 Combat is fast and flashy, with lots of effects popping up whenever you engage with enemies. It’s fun for a few hours, but there’s never a point where the combat becomes truly tactical or takes much thinking to succeed. It’s just about pushing as far as you can until you inevitably die, buying upgrades, and then being able to push just a little further mostly because of said upgrades. While I’m certain that with enough patience one could get as far as I have with a lot fewer deaths, the combat doesn’t feel built for a careful, meticulous approach.

Sometimes the combat can become a little too frantic and all of the effects start to really weigh down on the rest of the game. Fighting groups of monsters on the deeper floors can clutter the screen to the point of disorientation. Not only that, but on occasion during larger battles, all of the effects started to noticeably strain my machine and lower the framerate.

It’s all good fun, and obliterating a horde of monsters does feel exciting, but after a few hours I stopped feeling excited and began feeling as if I’d seen all Dungeon Souls has to offer. A few more hours, and it became too repetitive to pull me back in for another run. Granted, I put in well over two dozen hours before I was done with the game, and that’s certainly not a number to scoff at with the price tag it comes with.

Dungeon Souls provides ample fun for those who enjoy roguelikes. It borrows a lot from other games (Rogue Legacy, Spelunky, Nuclear Throne, to name a few), and while it doesn’t do much to differentiate itself, it’s still a fun dungeon-crawling hack ‘n slash adventure for quite a few hours.