Well, I must say, the age of VR is certainly a promising one. Sure, there may be quick cash grab games, but that’s always expected when new hardware releases. Take the Wii for example, I’m sure everyone can remember Wii Music in all of its glory. So, with that in mind, where does Dying: Reborn land on the spectrum of good to cash-in. Unfortunately, it seems the development team at Neckom had dollar bills in their eyes.

As a far as gameplay goes, Dying: Reborn features six sections of different escape room-based puzzles that are all varying degrees of challenging. After finishing each puzzle that is presented, you are then advanced to the next section of the game while being given doses of what is the plot throughout. When it comes to actual difficulty though, the puzzles are well designed for the most part but are sometimes a little too difficult. I understand that one has to get their money’s worth out of something such as this, but the way in which you have to solve each puzzle is rather alarming. It starts turning into more of a “okay, where is the thing I missed” situation, rather than a puzzle game. There are even some objects that you can pick up in-game which don’t help you solve the puzzle at all and are just there for collectibles sake. Very curious to say the least. 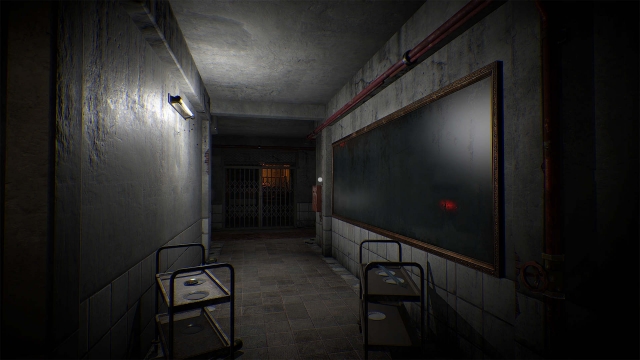 As I mentioned above, there is a story that plays out as you solve puzzles throughout. In regards to its quality however, it doesn’t really do anything that sets it apart from the rest of the game. It’s very Saw-esqe in that you can definitely sense there’s a twist coming right at the end. The twist itself being the second most predictable twist ever, right behind ‘the butler did it.’ I won’t say exactly say what it was but I will say that it wasn’t nearly as unique as I thought. Speaking of unique, most of the major characters also don’t fill that quota, this is with the exception of the villain however. There’s just something about the inflections of the main antagonist that really got to me. Perhaps it was the fish for a head or the fact that he cared about the main character as much as I did that I felt a real understanding of his struggles. Regardless of his reasoning, Mr. Fish for a head knocks the role of villain out of the park.

With characters though, there must come voice acting and oh, let me tell about the voice acting. When I first heard Mathew’s (that’s Mathew with one T) voice I knew it was going to a blast. I haven’t heard voice acting this bad since House of the Dead, a game well known for its hilarious dialogue. Like I said before though, it wasn’t all bad. Again, the main villain felt like he was the only one who really wanted to be there. On the same note as voices, the sound overall was pretty decent and did everything to a fairly standard degree. Graphically, the game does about the same, nothing really noteworthy in terms of style or design. Actually, I say nothing noteworthy, but the environments themselves look really good and have a fair bit of polish to them. This is expected however, especially in this generation of gaming. So while I can praise the look, the feel itself brings me right back out of the immersion.

All in all, well Dying: Reborn does have some good qualities about it, there’s just not enough here to make me recommend this title. Yes, the villain is good, the sound and design are up to par and the challenge is there, but it’s all done half-heartedly. Just basically thrown together in order to hit the VR market and make a quick buck. The choice is up to you obviously, but, for me personally, I’d say this title is nothing short of a cash-in.

Dying: Reborn is an interesting enough puzzle game that falls short of making any kind of impact at all. A cash-in game for the VR age, skipping this title would be recommended.