The small five-man indie game ensemble based in Bilbao, Spain has worked tirelessly since founding back in January 2016 to bring us a fresh take on competitive, team-based platform brawling in the form of Dynasty Feud.

The concept of party-orientated platform fighters isn’t a new one as we’re all aware. It’s immediately obvious that this game shares similar characteristics to many other titles in the genre such as Super Smash Brothers and Brawlhalla. That being said, DF still presents itself with a handful of unique characteristics that make it stand out from the crowd. Playable both locally or online, in normal and ranked games, you’re given the diversity to enjoy a casual bit of battery on the sofa or some more tactical plays dressed like a Navy Seal. You can choose to wield a keyboard and mouse or a gamepad controller, of which the latter is recommended to get the most out of the chaotic experience. 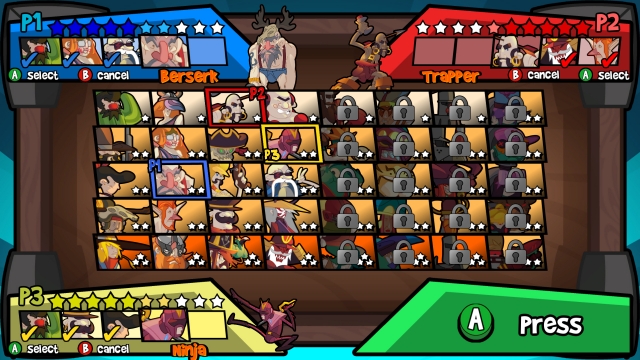 The game boasts a sizeable roster of different champions - 40 in total - each with his or her own abilities. DF is unlike your usual platform brawler in which you select a single character at the start of each round. Instead, you pick an entire team, or “dynasty” as they’re better known, to send in to the battlefield. You might recall Tekken Tag Tournament having a comparable approach. The only difference to this is in Local games where you can select the “All Star” mode and build a team made up of any characters, regardless of dynasty. Each dynasty consists of five family members and I know what you’re thinking: Four players, with five in each team...that’s one big trainwreck of characters on your screen. Luckily, this is not the case. One of DF’s main focal points is its “one-hit-kill” mechanic which is quite simply what it says on the tin: one hit…and you’re dead. No medics wrapping you up in bandages, or sipping your drink whilst you wait to respawn. It’s “wham, bam, thank you ma’am” and you’re dead. Brutal right? This makes for some rather tactical manoeuvring and you’ll often find yourself in a “Mexican Standoff” situation where neither player wants to commit to attacking. Following your speedy demise, the next character from your dynasty will appear unknowingly ready to face the same bloody fate and the game continues in this manner until one player is crowned victorious. Cue fanfare, party poppers and the occasional high five.

Visually, DF is really clean and I want to show my admiration to the art director at Kaia Studios. He’s done a fantastic job in keeping a uniform theme throughout. The different maps tie in well with the backstories of the dynasties and there are even some environments which are destructible, which adds another dynamic to each round. The character select screen, though lacking in individual ability info, is really well laid out and the splash art on the load screen gets you excited for the upcoming battle. The soundtrack to this little indie number is very catchy and I’ve been humming the title screen tune for hours after playing. One thing lacking musically, however, is the match report at the end of a game. It would be great to see a future patch that adds themed victory music that was unique to each different dynasty. 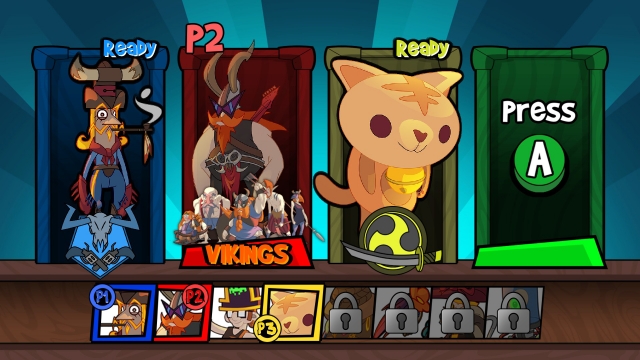 Whether you’ve got your comrades round your house for a few drinks and a friendly bit of bludgeoning, or you’re on comms with Captain Asparagus and have drawn camo all over your face, DF is sure to please. One of the many joys of this game is just how easy it is to load up and jump into the action. It’s so simple. Before you know it, you’re knee deep in landmines, bullets and balls of yarn thrown by seemingly harmless kittens…. you have been warned! If you’re riding solo then you’re a little limited to options as there isn’t currently a story mode. The training mode leaves a lot to be desired and there’s no fun in loading up a bunch of local network players for you to shoot at whilst they stand completely still and oblivious to your evil plans. Regardless of this, there is plenty of fun to be had in DF and it can be played whether you have twenty minutes to spare before heading off to work, or a whole evening of gaming. Get yourself involved and get stuck in!

Dynasty Feud is definitely worth picking up as one of those “must have” party games. The single player may leave you wanting more very quickly but if you can look past this then you’ll have a group game that will keep your friends coming back for revenge, round after round.