Upon first glance, Dystoria will remind a lot of people of the movie Tron (or Tron Legacy, for those of younger years), yet the game’s developers have taken inspiration from an altogether different film: The Last Starfighter. Players control a hapless young man who happens to be at the wrong place at the wrong time and is teleported inside a malfunctioning arcade machine by aliens.

There are two main sections to the game: the hub area where you can outfit your ships and read messages from the aliens who abducted you; and the in-game levels bedecked with neon lightning, flashing red enemies and galactic backgrounds. There is some backstory over how the player has been chosen as “one of Earth’s brightest” to compete against others in a tournament, yet the story can be largely ignored and doesn’t impose itself all too much on the gameplay. 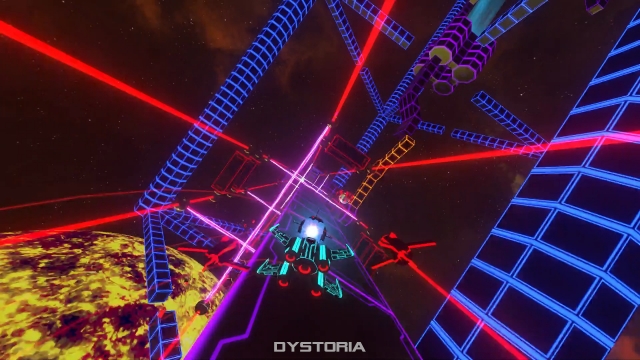 The 29 levels in Dystoria are creatively put together and surprisingly entertaining to traverse. As soon as I saw paths and quest targets placed in positions that would make Penrose Stairs look simple, I assumed the game would frustrate me. Thankfully, due to some tight six-axis controlling and a laudable camera, the game never manages to make you feel lost (or seasick). Your ship, which can be chosen from an initial two types (with more unlocked later), hovers slightly above the neon surfaces at a decent pace but never fast enough to make you lose control.

The aim of the game is to collect enough orb pieces to unlock a portal somewhere in the level. Alongside this objective are smaller side activities like collecting scrap (the in-game currency) and defeating enemies. Unfortunately enemy variety is where Dystoria falls down somewhat, as although in later levels they can be highly powerful, the player will never really be surprised by them. In later levels the game will throw puzzles, challenges and tasks to stop yo from immediately collecting the orbs required to escape. When parts of a level can be floating off in the distance, working out how to get there can be tricky. The in-game map is not much help here, unfortunately and is pretty bare bones. I actually found it easier to just fly around checking the surroundings than to open it up.

The game never really branches out from the “collect ‘em all” format, something that would have been nice to see in later levels. The ability to tackle most sections in your own way and from your own angles is a refreshing one, but when the reward is just another run to another portal it can feel rather flat. When Dystoria does flex its muscles a little the game asks you to kill all the enemies in a level. Unfortunately when the puzzling element is taken out from the game it becomes even more monotonous and these stages are by far the least entertaining, even with the variety of weapons you can outfit your ship with. 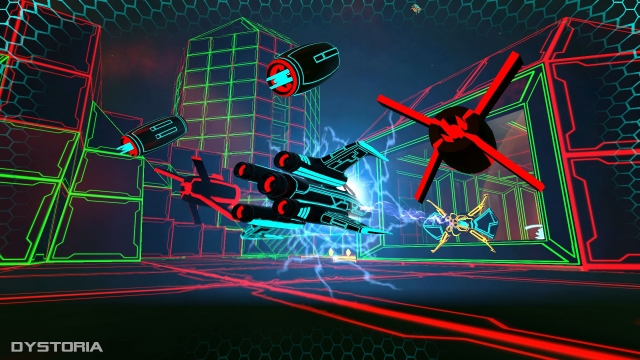 Visually, the game apes the look and feel of 80s sci-fi films set in cyberspace, and the neon-splattered design of the levels often leaves you feeling like you’re piloting yourself through the middle of a warehouse rave at times. The style is unique and distinct, though, and will likely remind the player of the brightly-coloured twin-stick shooters of the PlayStation One era, if not those of the arcade game Asteroids. Dystoria is also furnished with a great synth soundtrack of pulsing beats and tracks which make traversing the levels all the more an experience.

Dystoria is a great love letter to retro videogames and sci-fi movies from the 1980s. Its six-axis controls are easy to learn yet hard to master, while it’s physics-bending levels are a great way to reinvigorate a classic puzzler. The game is let down by a lack of variety in mission objectives and a paucity of decent enemies to fight, but it certainly offers something for the puzzle gamer looking for more action.

Dystoria is a great love letter to retro videogames and sci-fi movies from the 1980s. Its six-axis controls are easy to learn yet hard to master, while it’s physics-bending levels are a great way to reinvigorate a classic puzzler.